Where do you start when working a new piece of water, or returning to an old area you haven’t fished in years? Here are some vital clues!

This winter I returned to a NSW south coast estuary that I hadn’t fished in well over a decade, since moving to a different part of the coast. I knew the fishing back on my old patch would be relatively tough due to low water temperatures, clear water and a dramatic increase in commercial netting pressure over the last few years, but I was keen to see if I could still scratch up a few decent fish, despite the less-than-perfect conditions.

Naturally enough, one of the first things I did was to return to those parts of the river that had been good to me in the past. These included areas where I’d caught numbers of mulloway in the early 2000s. I’d heard that this particular stretch of the estuary’s lower reaches hadn’t fished all that consistently in more recent times, particularly since being heavily netted by commercial fishers. Sure enough, although I found reasonable amounts of bait here on this recent trip — mostly consisting of schools of small to middling chopper tailor — I failed to get a bite from a jewie, while having way too many plastics chewed up by tailor! 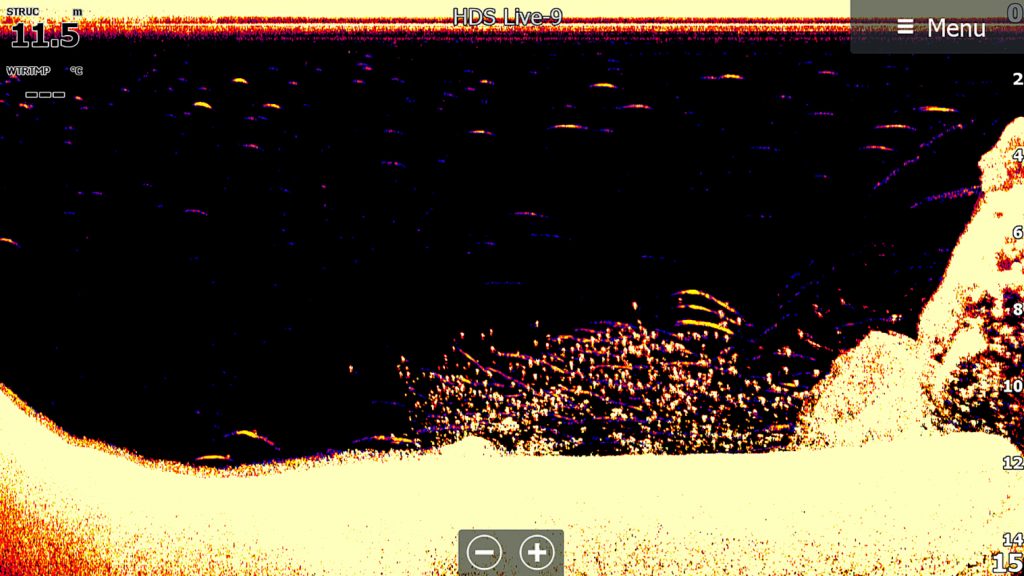 When the sounder screen lights up like this, you know you’ve struck pay-dirt. These fish are a mix of estuary perch, tailor, blackfish (luderick) and bream. Mulloway can’t resist such a smorgasbord! 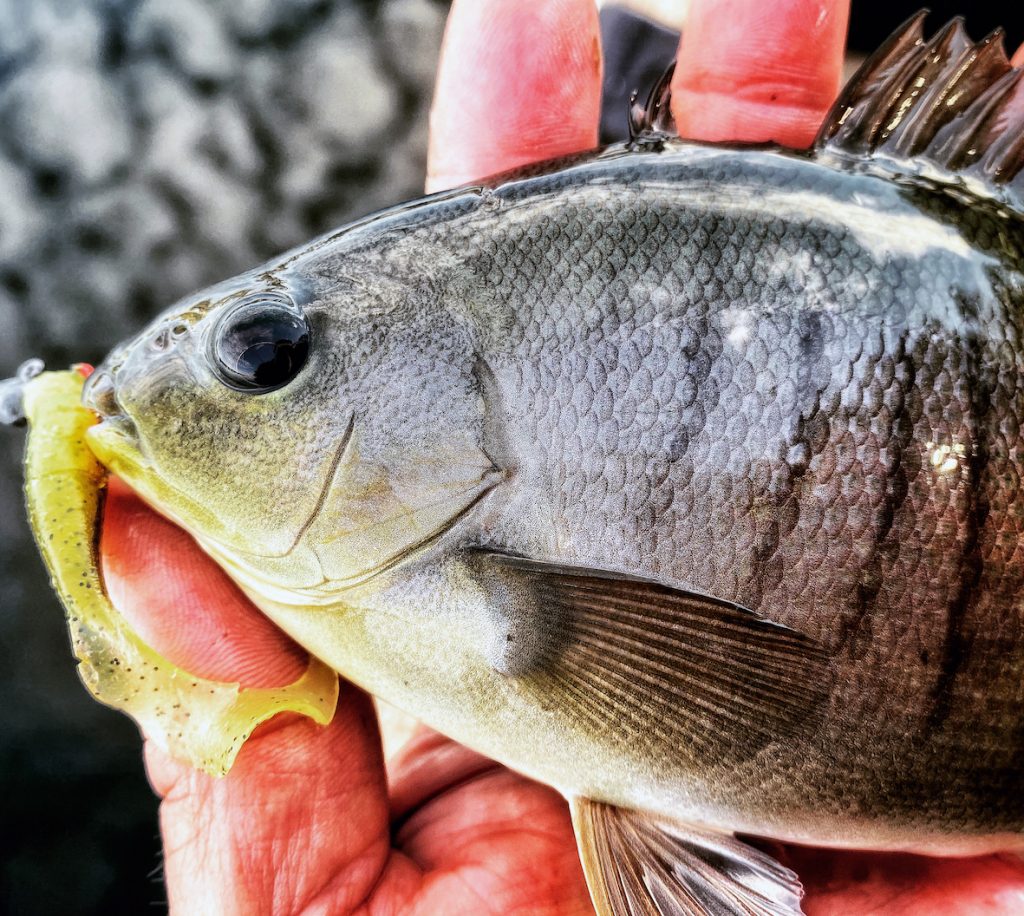 You know the luderick are thick when you start catching a few on soft plastics. They’re also a favourite meal for mulloway, and the author’s big jewie contained two about the size of this one. 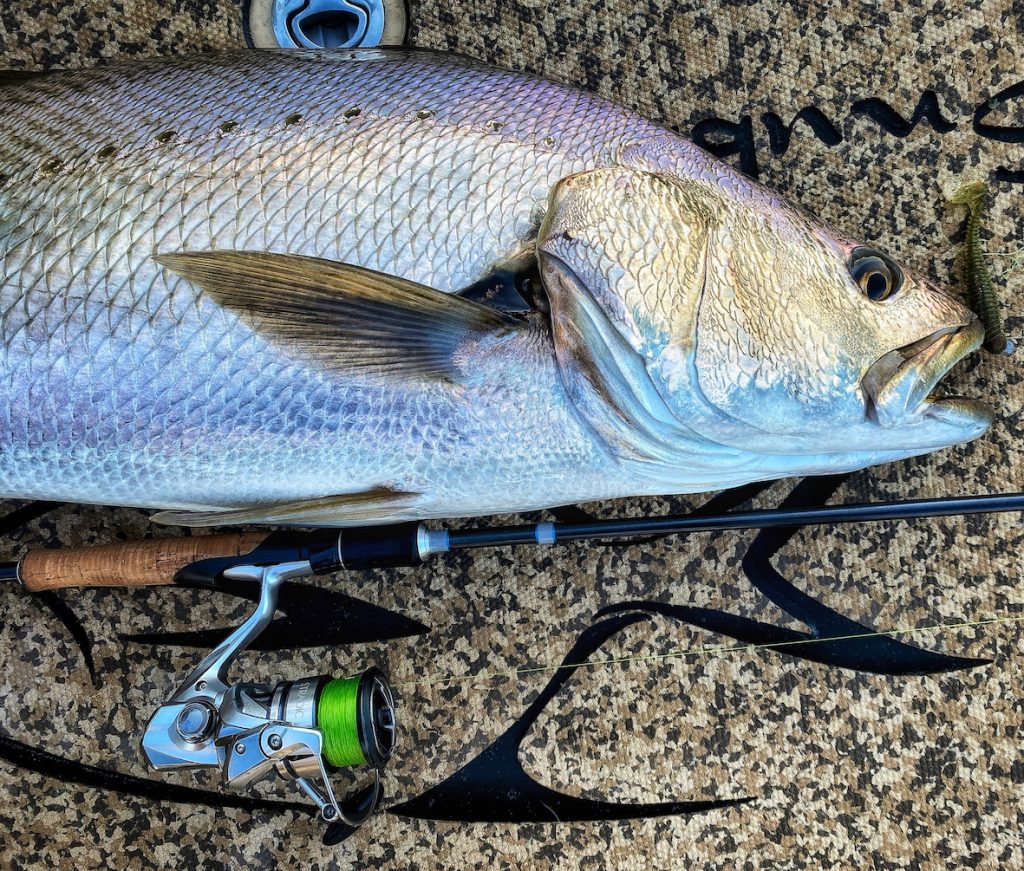 Mulloway are great looking fish fresh from the water. The rod is one of the new series of rebirthed T-Curves from Shimano, and it performed brilliantly. 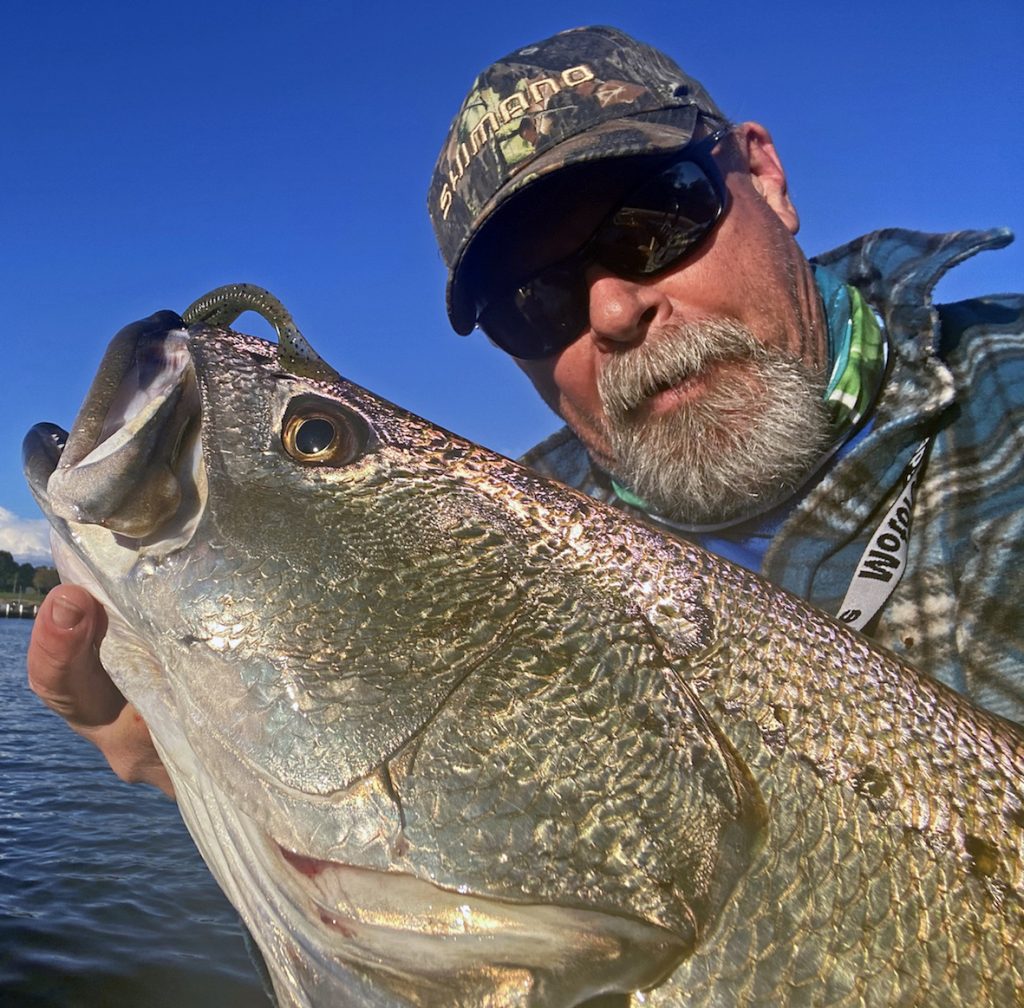 The author managed this lovely 104.5cm jewie or mulloway on a soft plastic after spending a full day and a half sussing out an estuary he hadn’t fished in well over a decade.

Later, I fished an eroded, casuarina-lined bank in a relatively narrow, deep section of the lower estuary. This is a very ‘fishy’ area with lots of deep, current-scoured structure and, as expected, it produced estuary perch, flathead, bream and more tailor on this visit, but again larger targets were scarce on the sounder and it wasn’t really ‘happening’ there.

The water throughout the lower estuary was clear, cool and highly saline, which led me to surmise that the bulk of fish activity may well be concentrated further upstream. With this in mind, I began heading upriver, slowing down to sound out any obvious (and historically proven) spots such as the junction of a major feeder creek with the main river, any deeper, rocky stretches and an extensive system of shallower, reefy water with a narrow channel running through it. All these spots held bait and larger fish, but not in the concentrations I was really looking for.

I finally struck pay-dirt just downstream of twin highway bridges spanning the river, in another area that often produced for me in the past. There’s some really interesting structure here in the form of a couple of massive, living-room size boulders that rise from 11-12m of water to about 1m or so under the surface on the dead low tide. As they so often did in my former days on the river, these impressive current breaks held massive quantities of fish… in fact, my sounder screen lit up like the proverbial Christmas tree!

Fishing small plastics on light gear, I quickly established that large numbers of estuary perch, tailor and blackfish (luderick) were present here. I’m sure there were also bream and tarwhine. These are all prime tucker for mulloway. Sure enough, while prospecting among these hordes of smaller fish, I hooked two very powerful opponents that both escaped, the second after straightening out my light jig hooks… I’d obviously found what I was looking for. Unfortunately, losing those two jewies spooked the rest of the school and I couldn’t relocate them that day.

Next morning I drove my car and boat upriver closer to this prime zone I’d found and launched at 8am (it was too cold to get enthusiastic about an earlier start!). I headed straight to the area where the fish had been the previous afternoon, sounding up similar quantities of bait and fish.

The tide was running out reasonably briskly, so I surmised that any large predators sitting in handy proximity to this mother lode of food would be seeking some sort of current break. The most obvious one was the dual sets of pylons immediately upstream of the aggregation of perch, tailor and other fish. It took me about three or four casts into this deep slot to get my distance and sink time exactly right with a 100mm soft plastic to ensure I was ‘touching down’ right in the prime slot behind the pylons… Next cast after that, the line ticked to a sharp pick-up and I struck, coming up tight on a very powerful fish. The result — after a torrid 10-15 minute stoush — was a 104.5cm, 10.5kg mulloway. I put this fish in the boat and drove straight back to the ramp to pull out. One fish like that is plenty for our needs, and I love leaving on a high!

I hope this process makes some sort of sense and potentially helps you to crack some codes and unlock a few patterns in your neck of the woods. There’s nothing magical about it. It’s simply a combination of five key factors:

1. Previous experience: relying on memories of productive spots in an old location, or looking for places that remind you of such places in new ones.

2. Observation: watching for signs and clues and, in particular, closely monitoring your sounder screen.

3. Exploration: not being afraid to cover a bit of water — often while not fishing at all — to simply look for concentrations of life.

4. Educated guesswork: extrapolating what you’re seeing above the water to make assumptions about the underwater topography, current breaks and so on.

5. A little good old-fashioned luck: it never hurts to have Lady Luck on your side! Fish enough and you WILL get lucky.

Until next time, tight lines.

Back to Basics: Don’t be a fool with fuel

by Steve ‘Starlo’ Starling • Too many people take the safety aspects involved with handling boat fuel for granted… potentially at their peril! I don’t mind admitting that I’m quietly terrified of petrol, especially in […]

by Steve ‘Starlo’ Starling • The humble flathead is Australia’s most popular saltwater target, and it’s not too hard to see why.       Whether you target tigers in Tassie, yanks in Victoria, sandies in NSW, […]