Cruising around in an open boat on a flat blue sea, casting lures at fast-moving pelagic fish, is something we used to associate with sportfishing in more tropical climes. However, when the conditions all come together, this kind of fishing is readily available further south. 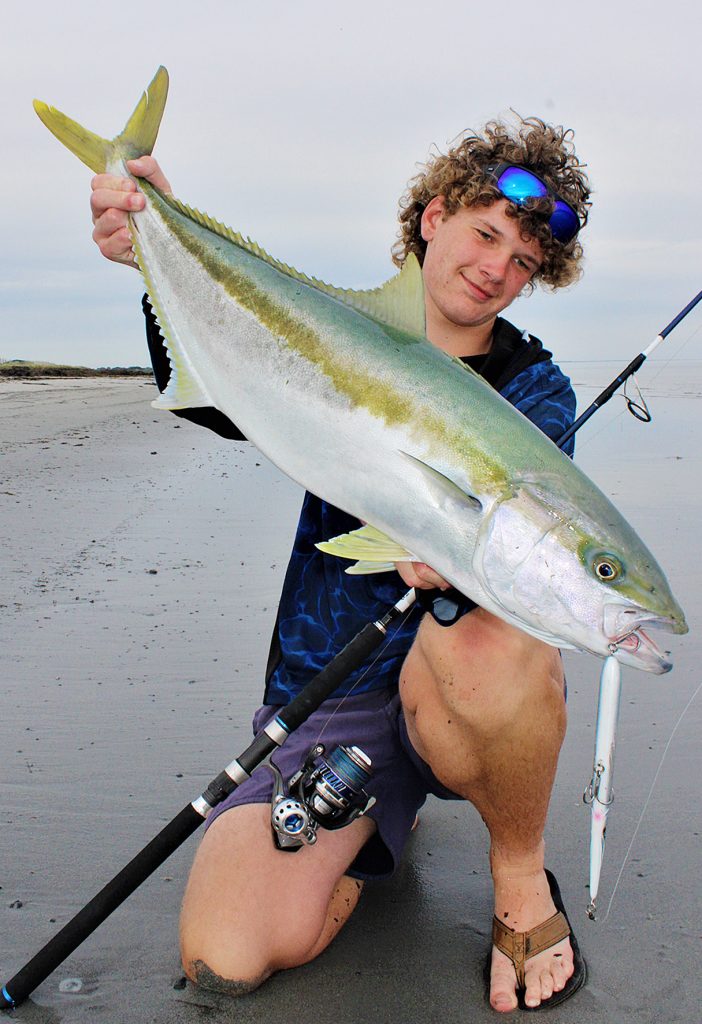 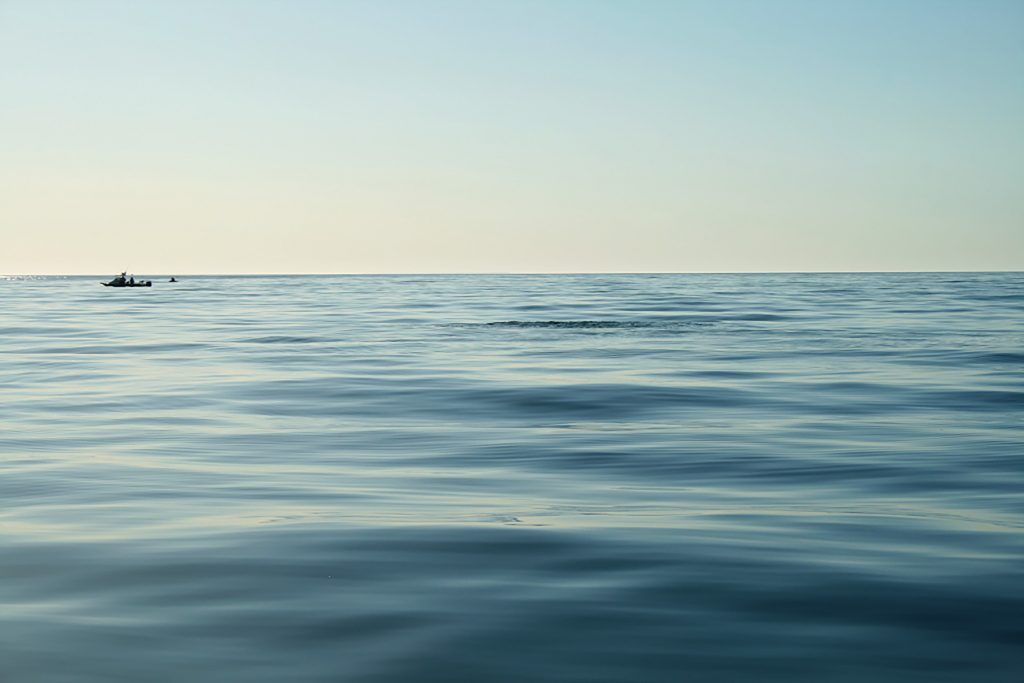 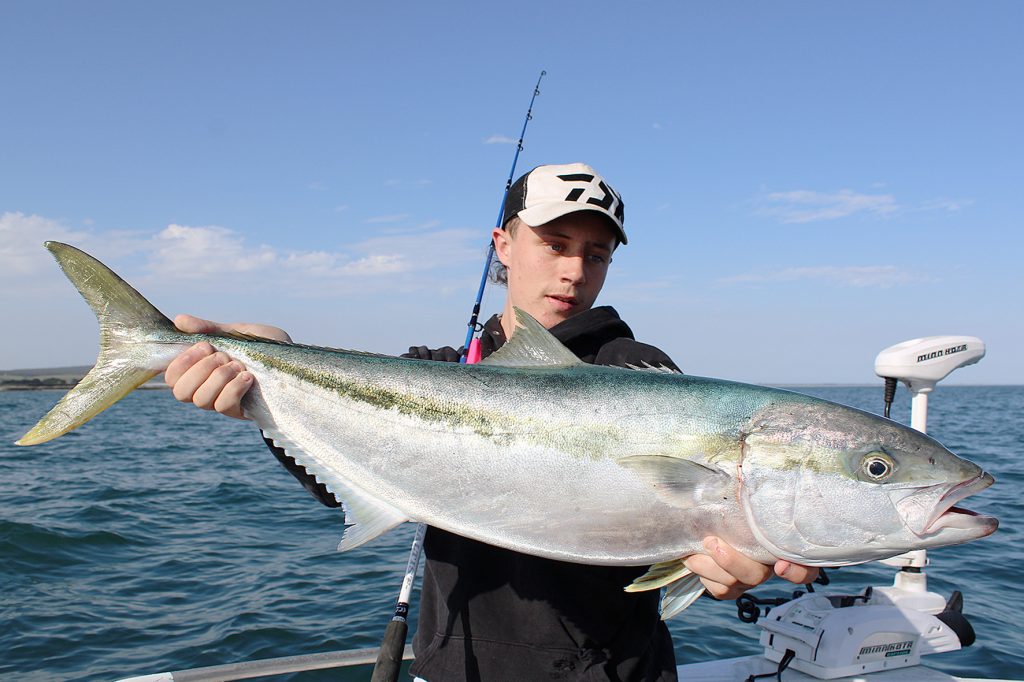 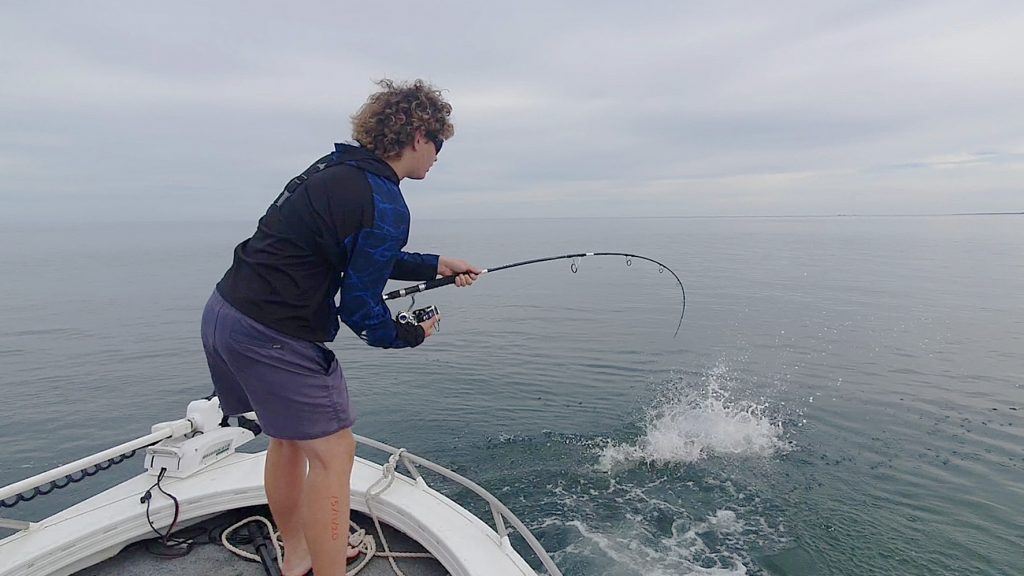 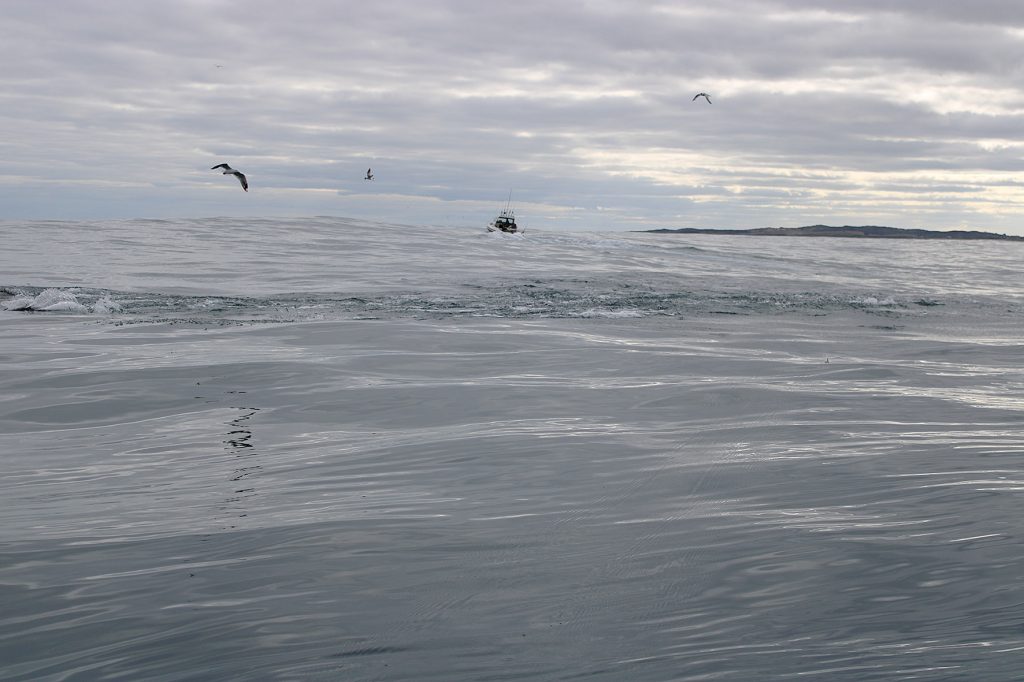 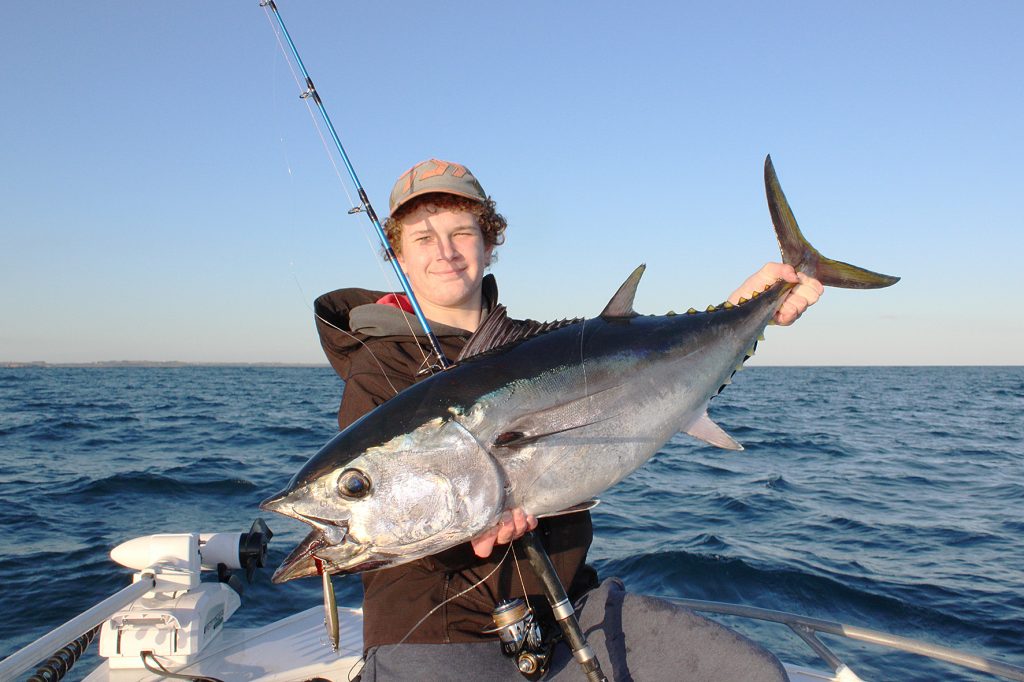 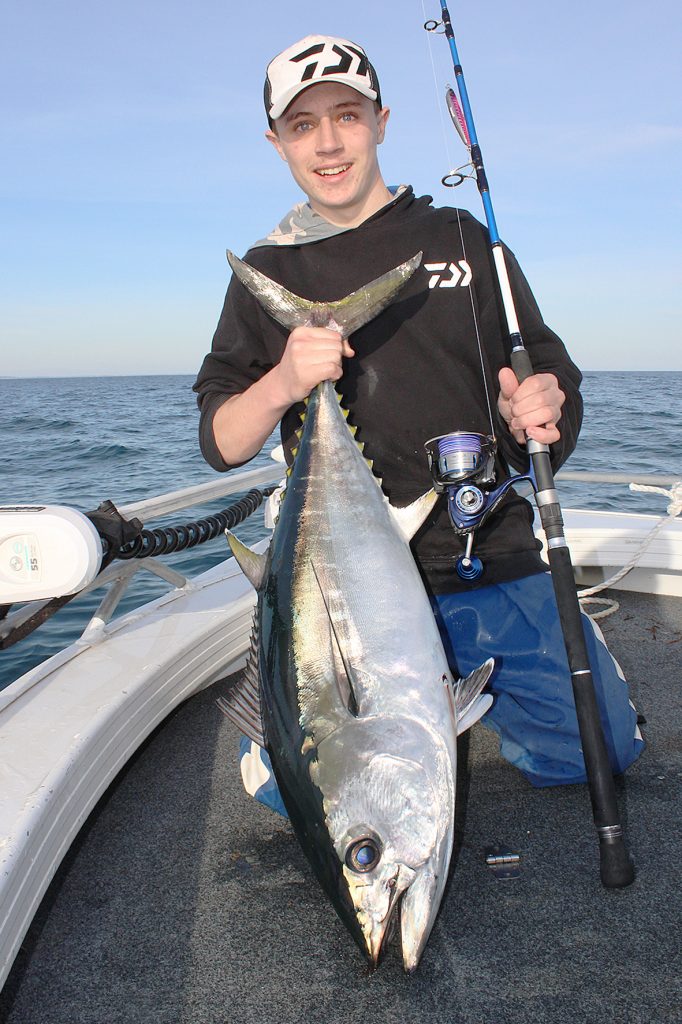 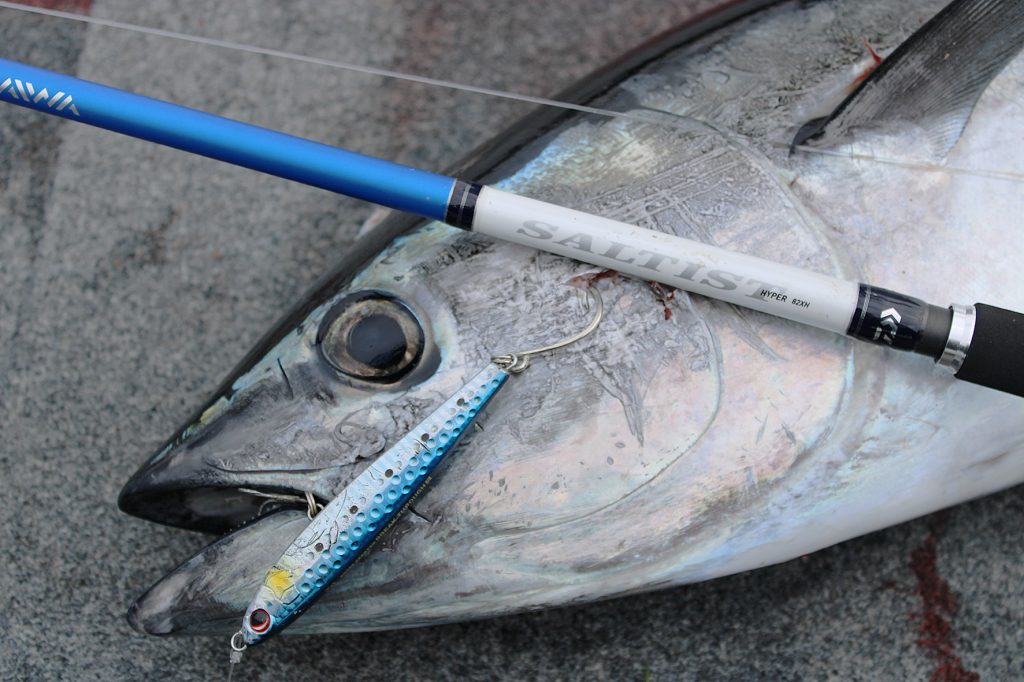 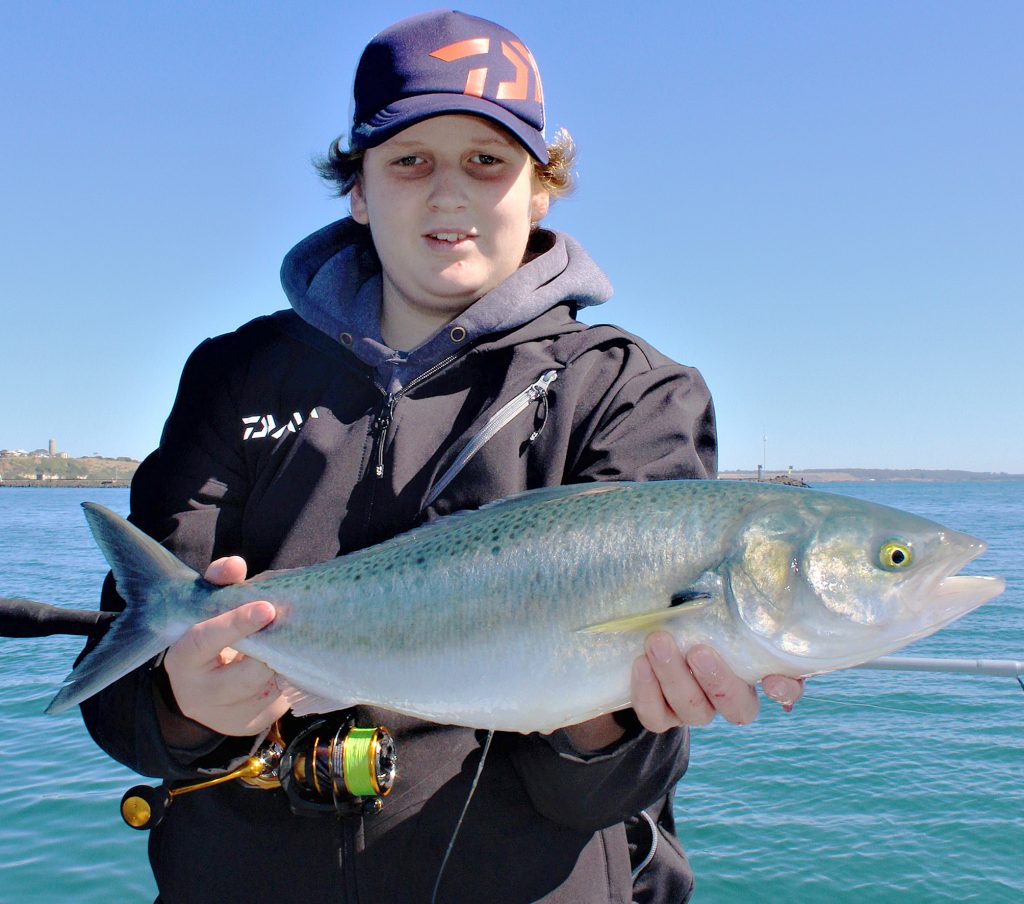 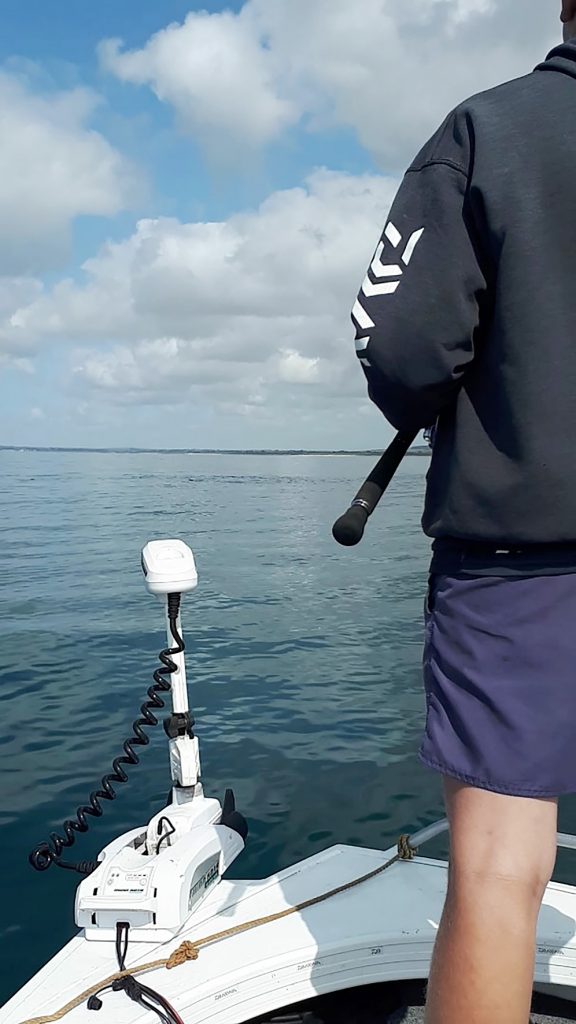 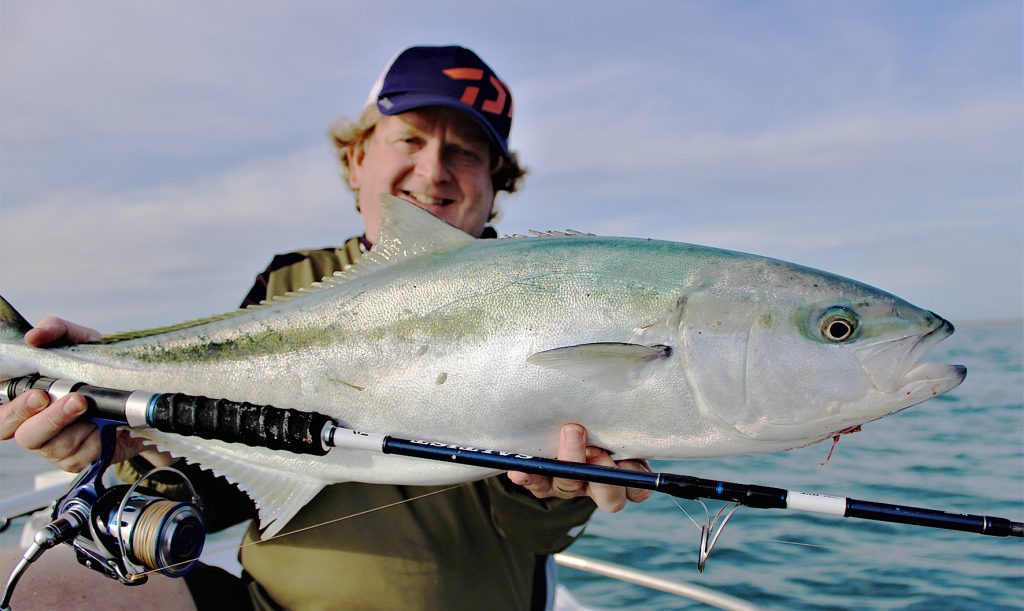 The peak season for targeting kingfish down south is from late December through to late March, and if conditions aren’t good, there is a minimal chance of being successful. Ideal conditions are warm to hot days with flat glassy seas and minimal swell and wind. Now, as those who are familiar with a Victorian summer know, you can go days, even weeks without these conditions occurring. Coinciding available fishing time with good conditions can be a very difficult proposition for many anglers.

A lot of anglers associate kingfish fishing with targeting certain specific locations, like pinnacles and reefs, but most of the kings we encounter come from driving around looking for cruising fish. Unfortunately these cruising fish can be found in anywhere from 2-30m of water, which in itself requires a degree of dedication. Many anglers will look for a while then give up and go bottom bashing for a gummy, set up a trail for a mako or jump in for some crays. However, once you find them, the real fun begins.

Kings are usually far more responsive than the summer tuna, but there are times when they can be fussy and cagey. Like many lure-caught species, kingfish often succumb to a reaction bite. They might not be in a feeding mood, but the commotion made by a surface lure seemingly can entice them into action. Having a big king smash a surface popper out of nowhere, watching one tailing your stickbait for a few metres then obliterating it in a shower of spray, or casting your soft plastic or slug over a school and having multiple kings climb all over it as it skips back to the boat, are some of the most exiting sportfishing experiences you’ll ever have. It is this sort of action that drives anglers to spend many days and hours on the water in pursuit of this adrenalin rush.

Unfortunately, after all that effort of trying to find them, some days they will follow your lure but not take it. If the aforementioned experiences are awesomely exciting, then inversely there is nothing more frustrating than seeing a meter-plus king (or 10) swim all the way to the boat with its nose behind the lure, then turn away. Sometimes this happens after one or two fish have already been caught from the school, which is fair enough; big fish don’t get big by being dumb. However, sometimes this happens as soon as you come across a school. This can be immensely frustrating as you pursue them across the sea, trying to get casts in, only for them to be refused.

The quick thinking or prepared angler who can quickly present a live bait into the mix before the fish departs the scene, can often be rewarded in this situation. Alternatively, towing a live bait or squid strip out the back as you are casting works well. Add a glitter float or two to the equation to help attract the fish, and you’re in business. And if you are searching at a quicker speed on the main motor, a spread of lures or teasers can bring unseen fish to the surface within casting range.

Once you have found a school there are a number of different lures that you can cast. In true kingfish fashion, what works one day can often be refused the next. DUO Hydras, 12” Slug-Gos and the Jack Fin Stylo all replicate the garfish that kings love to feed on. AT other times a more subtle subsurface offering with a soft plastic like a 7” BaitJunkie Jerkshad does the job.

Stickbaits work well at times too. Any stickbait that can be worked quickly, but then stops when paused and gives a bit of side-to-side flutter on the way down will do the job. A popper that throws a fair bit of spray like the Williamson Jet Popper can be an effective proposition, particularly in drawing up unseen fish.

We don’t do much specific jigging for kings, but we like to have a jig rigged up anyway. Sometimes a surface school will suddenly pop up below the boat on the sounder, and if you have a jig ready you can add bonus fish to your bag.

When the southern bluefin tuna began to make a welcome, consistent return to the Southern Victorian coast in 2006, they usually appeared around autumn and persisted through until the winter weather closed in. However, in the past few summers, tuna have been a consistent factor in the Victorian summer pelagic equation. Where once the capture of a summer tuna rose eyebrows, and the tuna-king double was a sought-after rarity, it lately has become a more reliable proposition.

The quality size of these summer fish is also impressive; although they’re not the barrel-size fish that many anglers target later in the year, they are still good, solid school-size fish, usually in the 15-30kg bracket.

Another benefit is that the fish are often closer to shore at this time of year, often in around 20-30m of water, and we have found them as close as 7m at times. They also seem to be popping up further and further along the coast, with fish spread from Portland in the west of the state, right through to offshore Westernport Bay in good numbers last season. Yes, they can be hard to tempt at times, but I’d rather fish in shorts and bare feet and catch only one good fish, rather than have a more productive day out trolling in the middle of winter.

Here are a couple of hints to help you if you are trying to chase these summer run bluefin.

First, unlike big winter bust-ups with heaps of birds, usually there are only a handful of birds (sometimes just one or two) on the fish. At other times you’ll see no birds at all, just the fish cruising in a big school on the surface, with only a slight ripple giving away their presence. It’s easier to spot this activity on calm days, and you need a keen set of eyes scanning the water  to locate these ‘nervous water’ surface ripples.

Long casts are essential for a couple of reasons. Firstly, if you get too close to the fish, you will spook them. Secondly, the longer the cast is, the more opportunity the fish has to chase down your lure. You’ll want a rod that can cast these distances, is light enough to use all day, but with plenty of backbone to stop these hard-fighting fish (we use the model 20 Saltist Hyper V2 Power Rounder and Multi-Tool rods). Match your rod to a 4000 size Matched to a Saltist LTD 4000 spooled with 40-50lb J-braid grand with leaders from 40lb-60lb and you have a perfect combination to throw at both school tuna and kings. The unobtrusive blue color of the j-Braid grand blends in with the surrounds of the ocean/sky as I have noticed spooky fish seeming to swim down from the surface when having a length of bright colored line cross their path.

Hunting these fish down and casting stick bait style lures is a most popular way of targeting summer bluefin. Lures like the Shore Spartan Breakthrough in 120mm that cast well, have a slight shimmy on the drop and are strongly constructed to withstand rigors of the battle, are perfect for this job. If trolling is your game, smaller skirts, virtually what you would normally associate with salmon fishing, is usually the best method for these fish which seem to be always feeding on small bait. This is another good thing about summer bluefin, that they are easily accessible to anglers without the need for complex game trolling equipment and big boats. Any good quality spin reel in the 6000-8000 size spooled with 30-50lb braid will do the job. The 64CJ model in Demon blood and Saltist Hyper have always been our go to spin reel trolling rods.

When the fish can be just spotted cruising around but not feeding they can be hard to tempt. Dropping the electric motor in and sneaking up sometimes helps if you managed to get close enough, and in front of which way the fish are heading. Switching off the sounder is also something that we try at times to help. Targeting the head of the school and not having the lure unnaturally coming through, or at the school from behind, can be important on the tough days. Mixing up retrieve speeds is also something that changes, on not just a day by day basis, but a school by school proposition.

Definitely the least regal of the three, the humble Australian salmon can still provide plenty of fun particularly on light tackle. Often thought of as mainly a winter species, schools of fish can be still encountered during summer when you are looking for kings and tuna. The salmon can usually be easily identified as a school of them is a bubblier, messier looking school than the subtler surface disturbance made by cruising tuna or kings.

These summer schools of salmon are often quality fish though with fish to 3 to 4kg. The tendency to sometimes have a few rat kings of a similar size mixed in with them makes for an attractive lighter tackle option. Smaller sized stick baits, soft plastic and metal slugs will all do the job on both the salmon and any king or tuna that might just happen to be feeding on the same baitschool and ready to provide you with a far bigger surprise.

So keep your eyes on the forecast and get yourself out and look for some Victorian surface pelagic action. You won’t regret the time and effort spent once you hook up and you drag starts screaming.

Targeting pelagics in the depths

by Mark Bargenquast • It’s that time of the year again to pull out the winter woolies and rethink angling opportunities for the next few months, as cooling water temperatures and different weather patterns bring […]

by Jeremy Arnold • Moreton Bay is predominantly shallow and sandy area with few fish holding features. There is very little reef structure within the bay, with the exception of a few patches of coffee […]