King George whiting are predominantly a summer species to target in both Western Port and Port Phillip Bay, however they can be targeted all year round. Whiting can be caught right through both waterways. Whether you’re fishing from a boat, sand, timber or stones, whiting are a viable catch for anglers of all levels of experience.

The whiting season in Victoria typically kicks off around December. They can be caught before December, however they are often overlooked as most Vic anglers during this time have snapper tunnel vision and can’t see what’s lurking in the peripherals.

From December onwards, a huge switch to whiting is common. You can get the good oil from reading tackle stores weekly fishing reports, or if you’re hip and follow social media, Facebook and Instagram accounts are often flooded with tasty ting reports.

Whiting also take a backseat while many anglers head west in search of southern bluefin tuna or Australian salmon fishing along many of our surf beaches.

While the mindset may be that the whiting have gone for another season, the truth of the matter is that they are in fact a year round affair and winter continues to produce fish as good in quality as those caught through the summer months.

WINTER BLUES
Winter in Victoria is never kind, and prying yourself from the comforts of your warm bed only to bob like a cork on the ocean with the days forecast a top of 12°C, showers, and a wind chill factor of 5°C really doesn’t ‘get you pumped.’

The onset of winter certainly changes the mood of many and when it comes to fishing, pick the best days from the weekly forecast and you’ll be at your happiest when your rod is buckled. May through to August is the prime time to target winter whiting, and although May is technically autumn, it really is the transition month to cool winds.

Because of the cold harsh conditions, those that are successful tend to be repeat customers and have their plans in place and the right gear at the ready. The first thing you need to consider when heading out in winter is to make sure you stay warm. There is no doubt about it, the wind can be bone chilling and the rain relentless – but in my book, it is still better than spending a day on the couch. It does pay to wear thermals, and it is necessary to wear waterproof pants, a good waterproof/windproof jacket, gloves, a beanie or lumberjack cap and winter buff. Though this might sound extreme, the morning air and wind factor can be almost bone chilling on the way out to your destination.

PRIME LOCATIONS
Finding whiting in summer is hard enough, finding them in winter can be even harder – unless you know where to look. During winter, whiting continue to inhabit sandy areas adjacent to patches of weed. In saying that, it is also common to find them around areas of solid reef.

In conjunction with the bottom feeders, winter whiting seem to prefer locations with high tidal flow. This could be because the flow of the tides brings food and the fish can conserve their energy in cool water more easily by milling around on the bottom and allowing the tide to bring the food to them.

Such locations in Port Phillip Bay are in the Coles Channel at St Leonards, near the West Channel marker, around the edges of the West Sand, Queenscliff, Victory Shoal, Weeroona Bay at Portsea as well as out from Point Franklin.

In Western Port however, Balnarring, Somers, Pt Leo, Flinders, Cat Bay and up to the Nobbies are all worthy locations to try your luck. 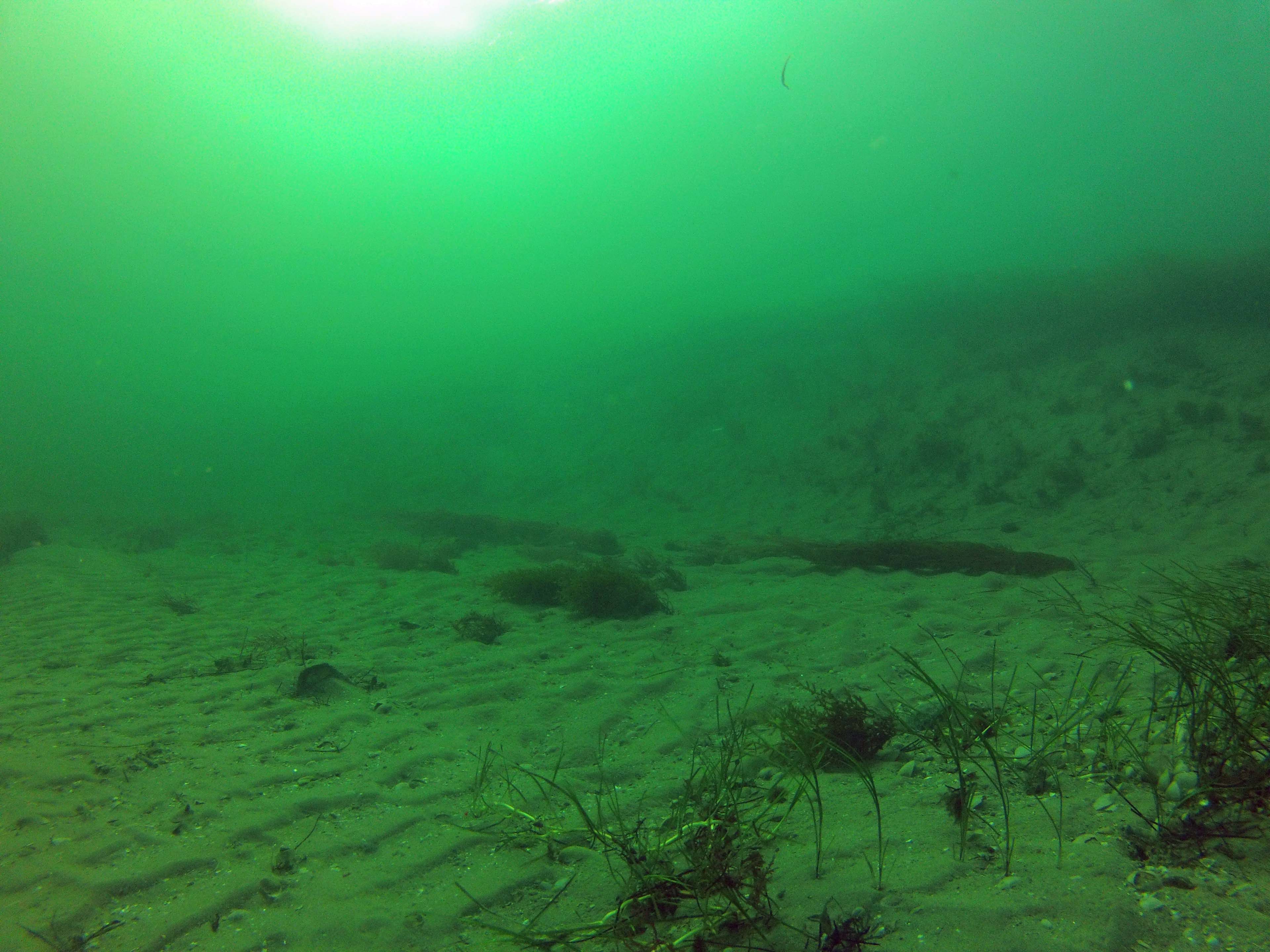 Finding whiting territory is imperative to success. A combination of sand, weed and good current is where you will find them. 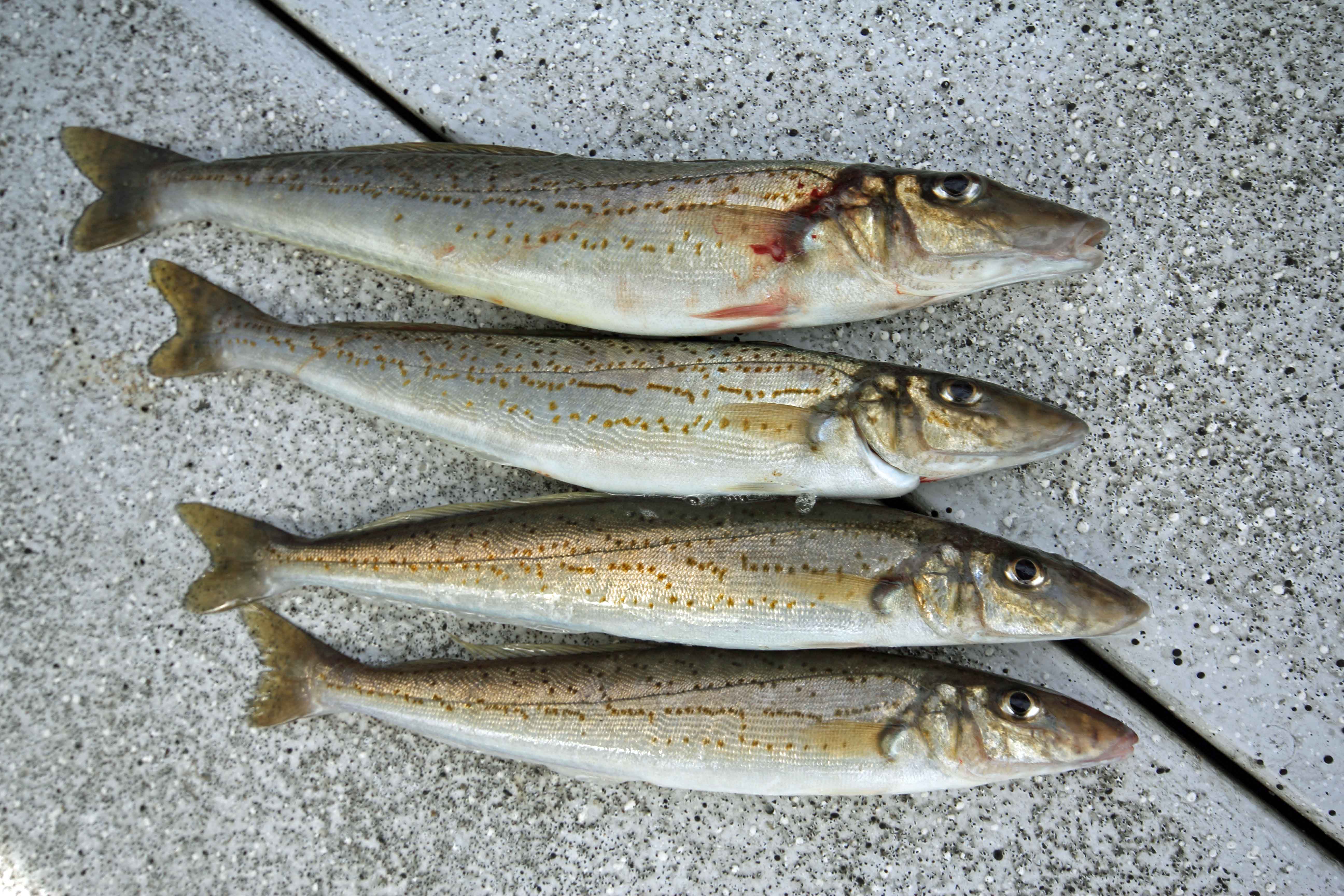 Throughout winter you might not catch cricket score numbers of whiting but a few good solid fish makes it all worthwhile. 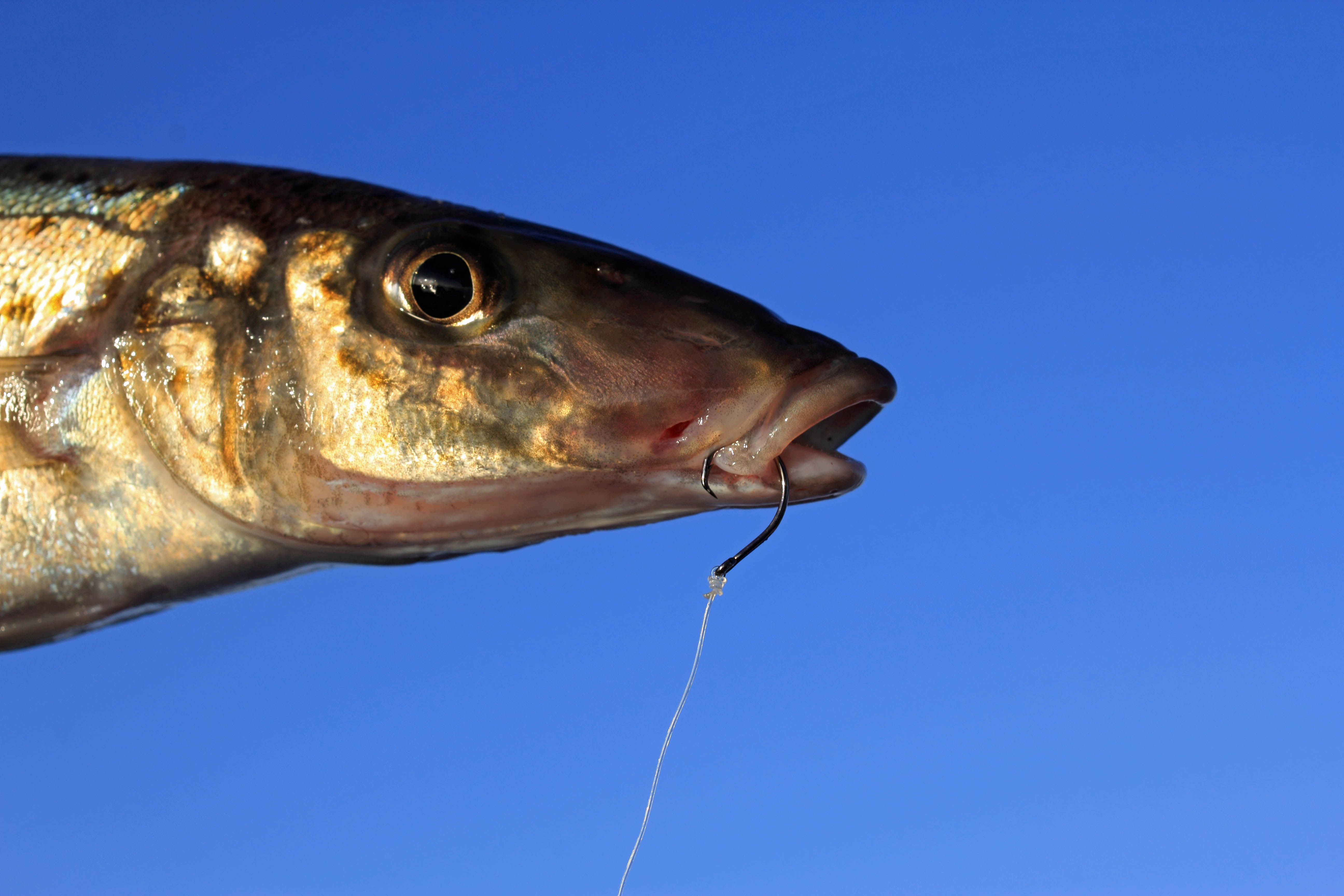 There is a time and place for the use of the right hook. Over 90% of the time, a Mustad Demon #6 circle hook will keep the fish connected and ensure the fish hook themselves. However, in shallow water when the fish are finicky, a Mustad Bloodworm #6 will be the difference between taking home a feed and not. 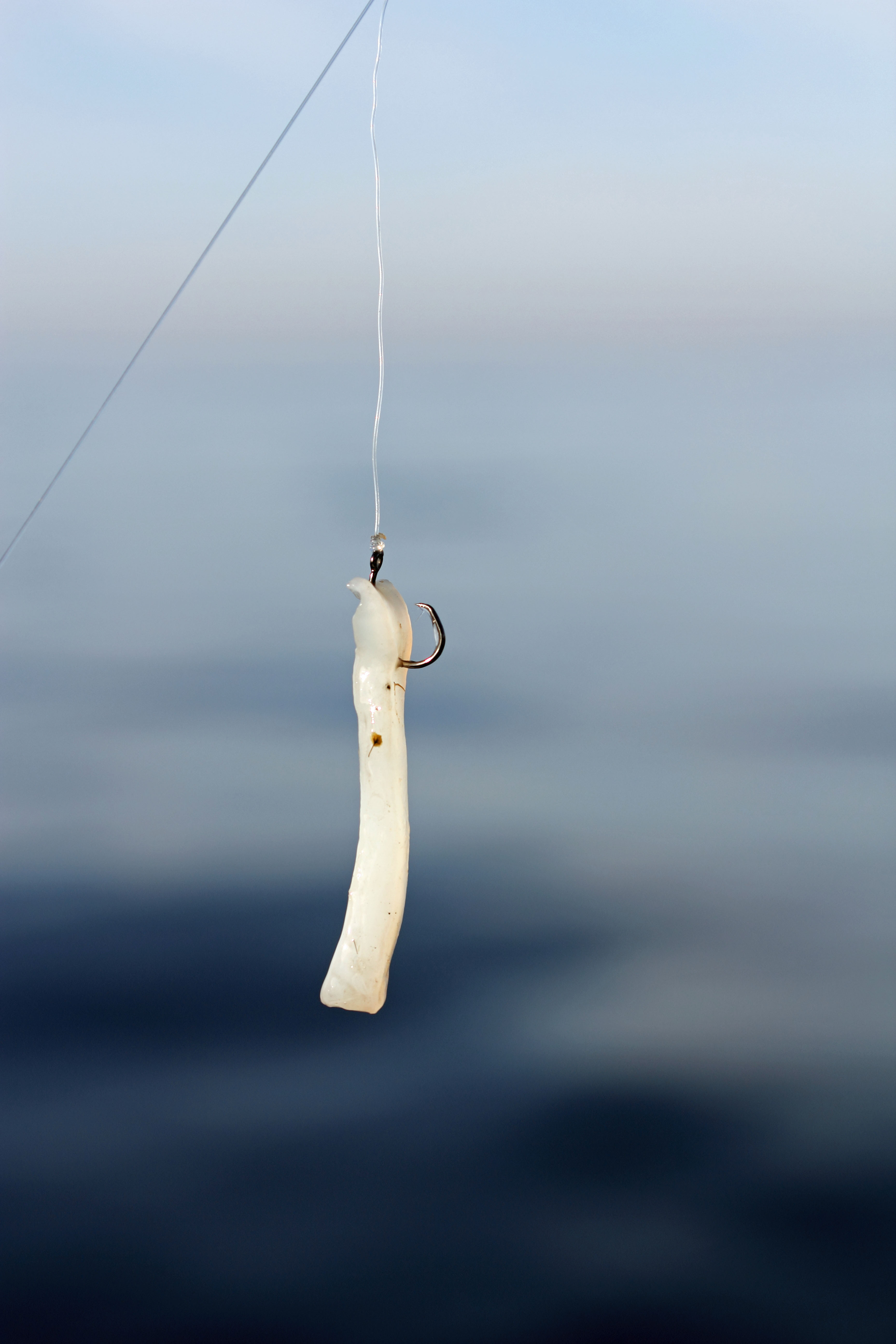 When baiting your hook, always leave as much of the hook point exposed as possible. 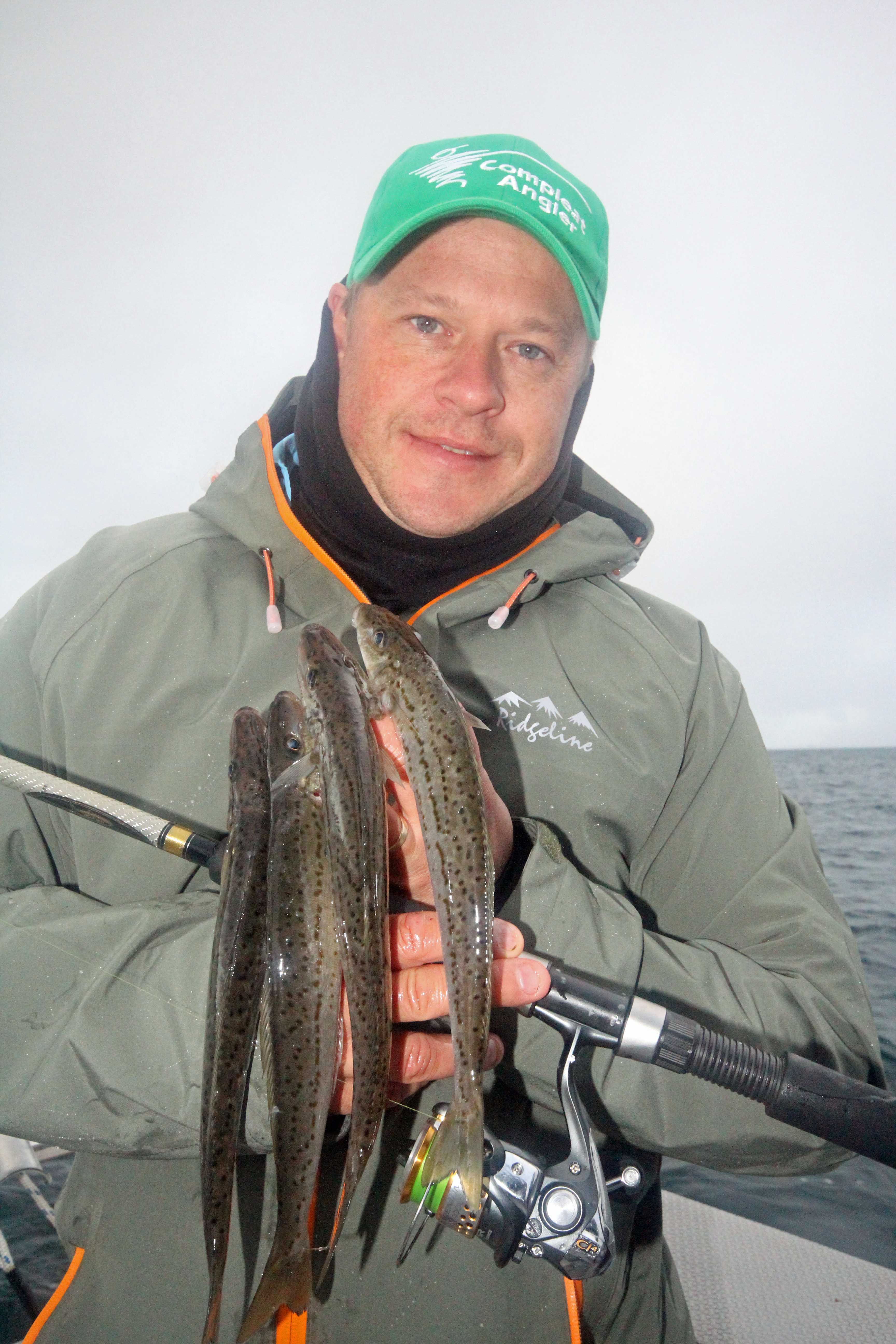 When heading out always remember to rug up and keep warm. Fishing in winter for whiting is a very cold affair at times. 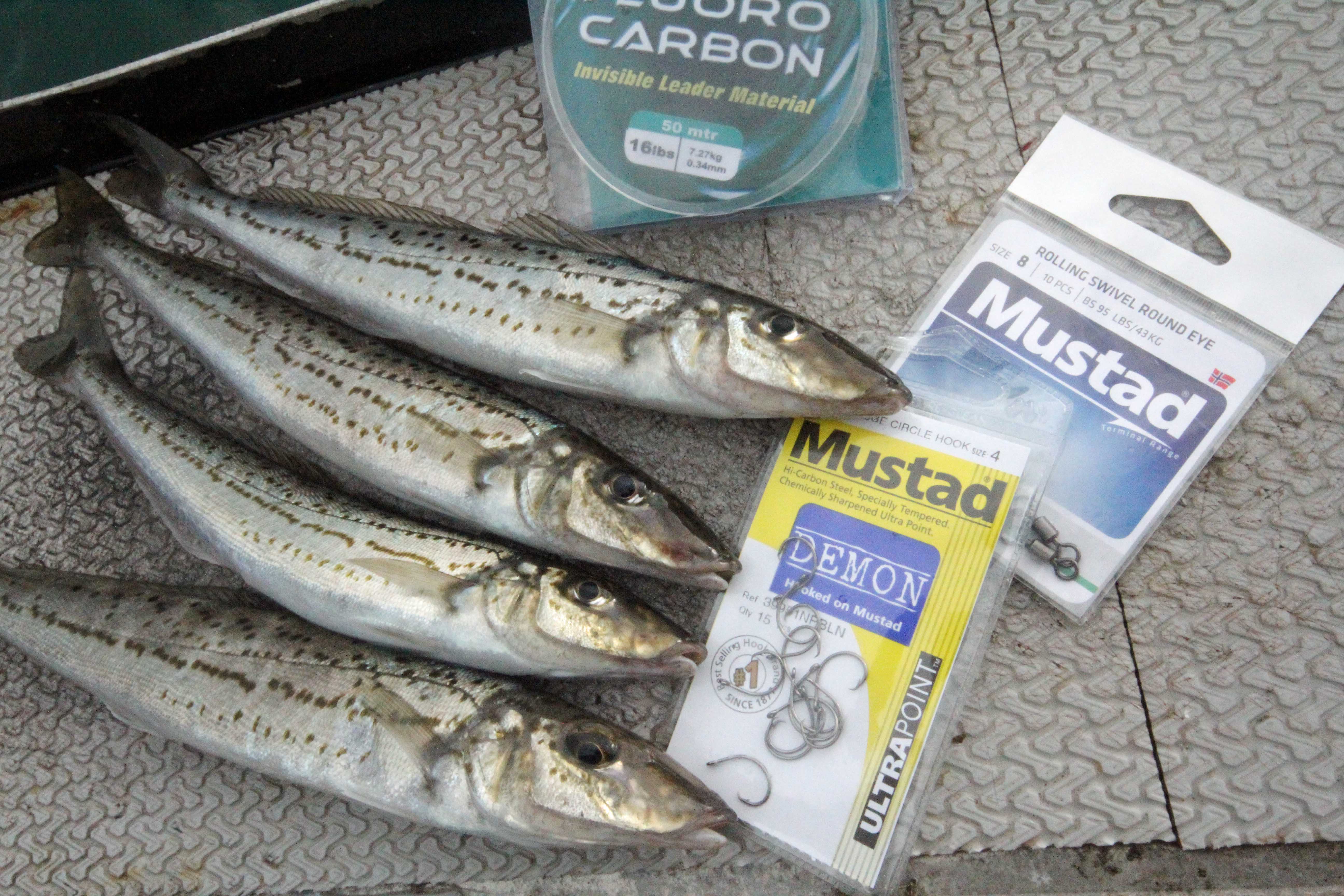 A lovely feed to take home to the family. 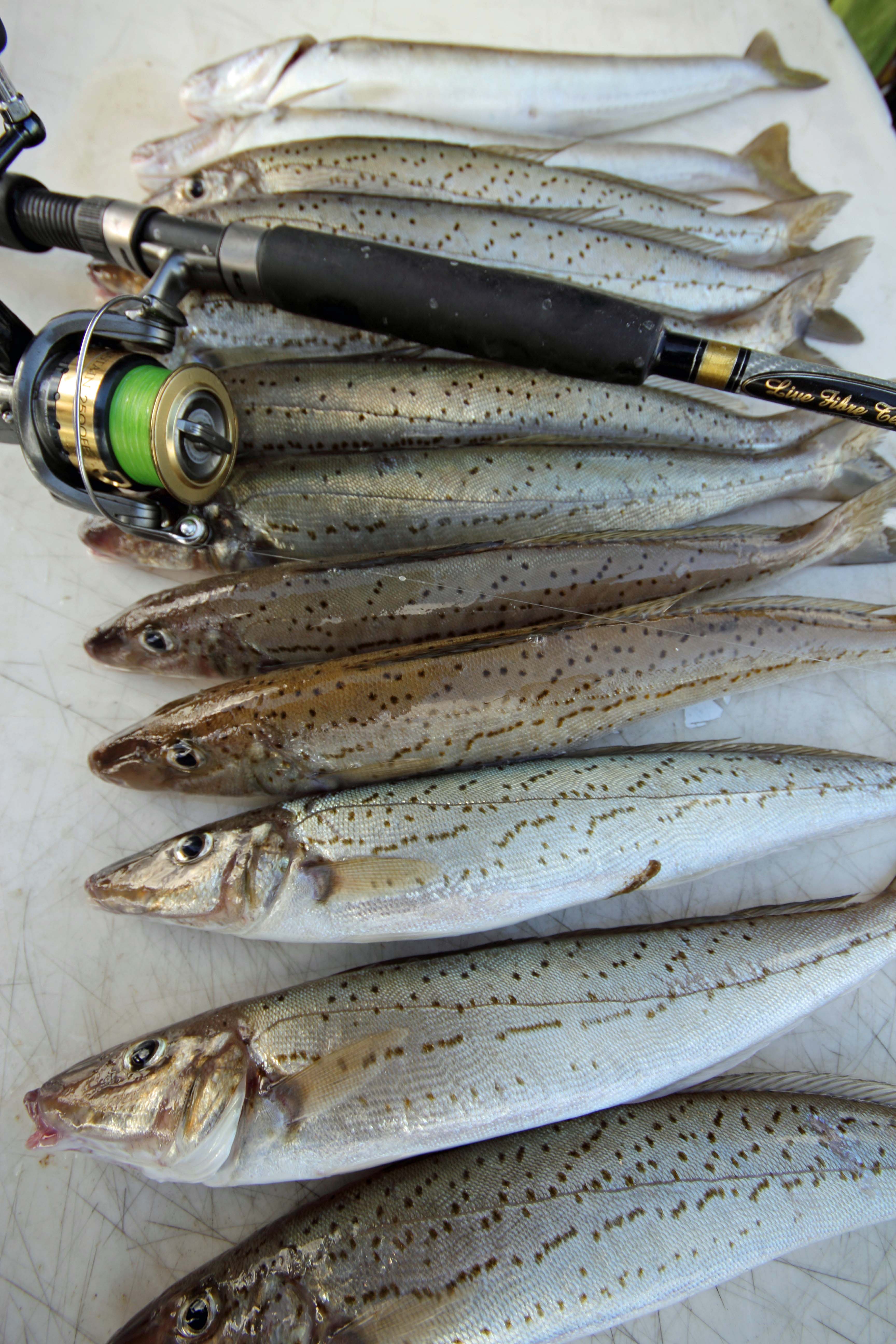 If you’re happy to spend the day working known whiting haunts, you should come home with a solid feed of whiting. 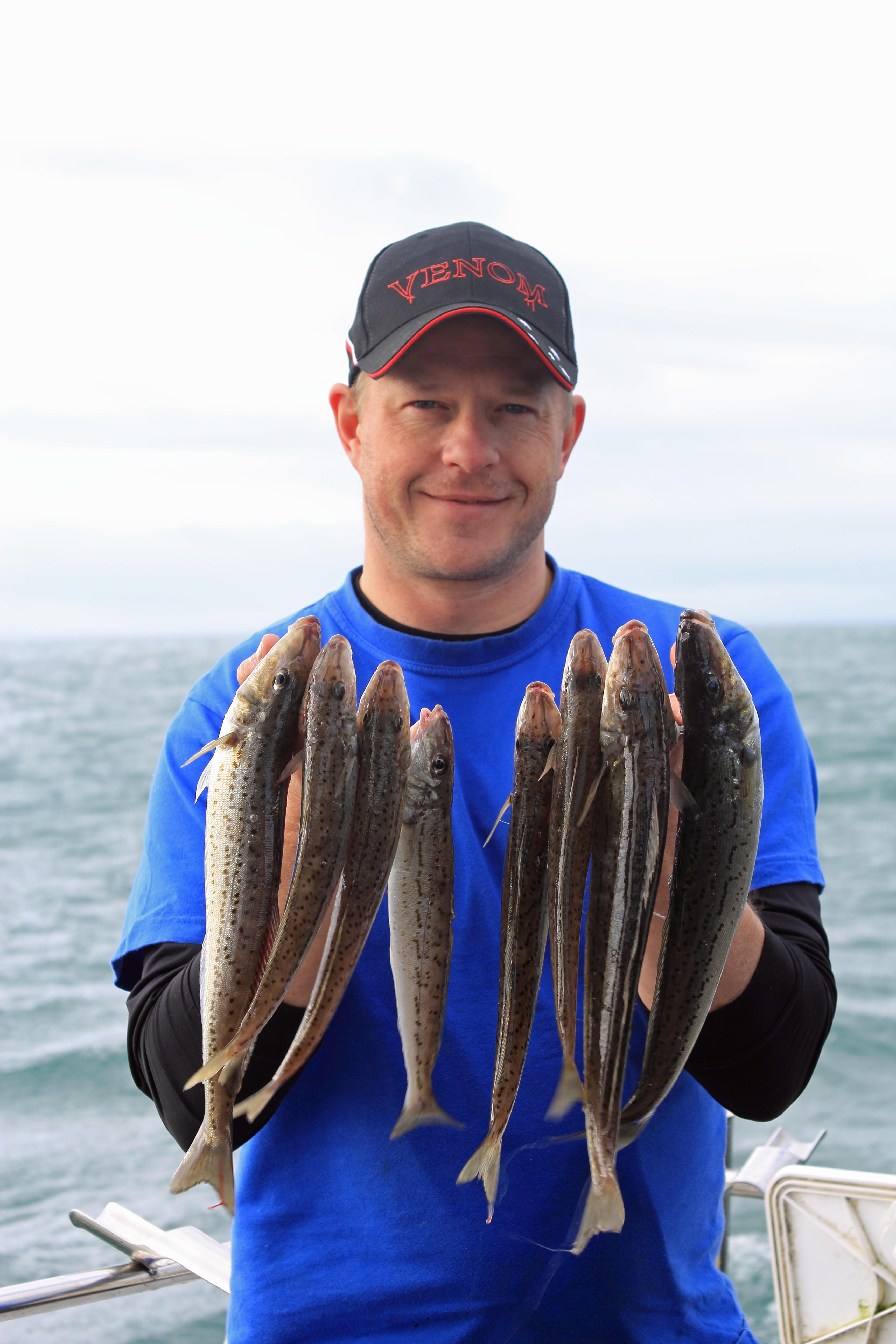 Jarrod Day with a nice catch of winter whiting.

BAIT and BERLEY
I’ve heard it many times and still to this day after targeting whiting for well over a decade, I personally haven’t caught a winter whiting using pilchard fillets. Call me sceptical, but I’ve never had a problem using pipi, mussel, and/or live Bass yabbies if you have the time to gather them.

As important as it is to have the right bait, you also want to make sure you go home with a good feed. Whiting can be quite a difficult species to locate but provided you have a good location, berley will bring them straight to you. Berleying for whiting doesn’t need to be complex, but the mixture does have to have a fine consistency. Chook pellets from your local stockfeed store are more than ample for the job. They swell when wet and break down into a fine mist which can easily be distributed with the current. Although the pellets by themselves won’t have an inviting aroma, I like to soak them in a bucket with tuna oil covering them the night before. This way the pellets absorb the tuna oil and make a real fishy smell through the water.

Another very good berley is to use a bag of pilchards and place them into a berley pot. Before sending the pot to the bottom, mash them up but not into tiny pieces, rather just enough to let the flakes flow through the pot. With both methods, after about 10 minutes, the pot will require a shake to get it flowing again as the pot can become blocked.

Despite the cold and rain on occasion, the weather in winter can be quite enjoyable, especially in the afternoons. Though the air and sea breeze might be cool, adequate clothing will prevent you from getting cold.

THE RIG
Setting up for whiting in winter is no different compared to that in the summer months. There are three main rigs to use when fishing for whiting and asking three different whiting anglers which rig is better will never give you the right answer.

Each of the three rig styles has its own unique time in which it can be used. The paternoster rig is ideal in situations when you’re fishing thick weed or reef areas.

This rig keeps the baits suspended over the weed and reef so not to become snagged. This rig is usually tied from 15lb fluorocarbon leader for the abrasion resistance against the weed and reef and is fished when using braided mainline and circle hooks for the instant hook set.

A fixed extended paternoster rig is ideal when fishing in more sandy locations where reef and weed aren’t as much of an issue. This rig is typically tied from 8-12lb leader, once again using a circle hook.

A running sinker rig on the other hand is used when whiting are finicky and require the angler to set the hook. This rig is usually fished in shallow water where whiting are shy. I recommend 6-8lb fluorocarbon leader with a size 6 hook.

Fishing for whiting in winter is a lot of fun, and very few anglers take advantage of this fishery.

by David Seaman • Whiting are not a species many of us think about until summer hits and the sand flats erupt with life. As a kid I remember wading the flats, casting for flathead […]

by Brett Geddes • When talking about EPs even my closest fishing buddies call me sneaky, deceitful, and swampy, and for good reason. Actually they call me a lot worse and I love it! You […]

Do you clip or do you knot?

by Jarrod Day • I’ll probably cop a bit of flack for this comment, but while I get older and rounder as the years pass, some things in fishing become a little more challenging – […]