You have three casts and then dip your rod in the water again. It’s light, you can see but only a short distance as the thick fog blocks your sight. It’s 6:30am, your fingers are borderline frozen, and the thermometer reads -3°C. You can only get three casts in before your guides freeze over and the next cast becomes impossible. Cold is an understatement, but this is the struggle an angler must endure to compete in the winter cod game.

Friends and family members who aren’t the committed angler you are will say you’re crazy or insane. ‘What’s wrong with you?’ they’ll ask. But they don’t know the feeling of success when a metre goodoo slips into your oversize landing net, as you exhale another thick white fog of air and high five your buddy like you just won the lotto.

Targeting big Murray cod in winter is not for the weekend warrior, it’s a game of commitment and proper preparation. It’s not easy, but nothing you have to work hard for the reward is. This game is one I’ve come to love over the last few seasons, along with many other Murray cod enthusiasts. I’ve collected plenty of scars and learnt a lot, yet there is still more to learn. We are still in the early stages of understanding the full potential of this game, but from my book of experiences thus far, this is what I’ve learnt.

Probably the most important aspect of fishing through the heart of winter in any waterway where conditions consistently drop well below zero is the need for proper preparation. The first time I fished Copeton, I’d seen nothing but monster cod flooding social media coming from its waters.

I recruited a mate and basically promised him cod on tap. How wrong I was. It was mid May and with a bucket load of confidence we rocked up with a travel bag that consisted of a pair of flip flops, two pairs of footy shorts, a few T-bangers and a loan hoodie. It quickly became apparent that we were not set-up properly to fish in the conditions and after three days on the water we returned home with a solid case of the flu and a busted ego from not even getting a touch.

The moral of the story is to be prepared. It’s going to be cold and the prime bite periods coincide with the coldest parts of the day, so dress according.

A good set of rainwear is mandatory, as it may not rain but everything will still be wet. Adventure brands such as Kathmandu, Macpac, Patagonia and the like all make quality jackets, so pick one up. Thermals are great, I wear them as a base layer. Fingerless gloves matched with hand warmers are almost compulsory when it gets below zero, as there’s nothing worse than trying to wind a baitcaster when you can’t feel your fingers. Beanies and neck warmers must also go in along with the most important piece of them all, ugg boots. Do not leave home without a pair! 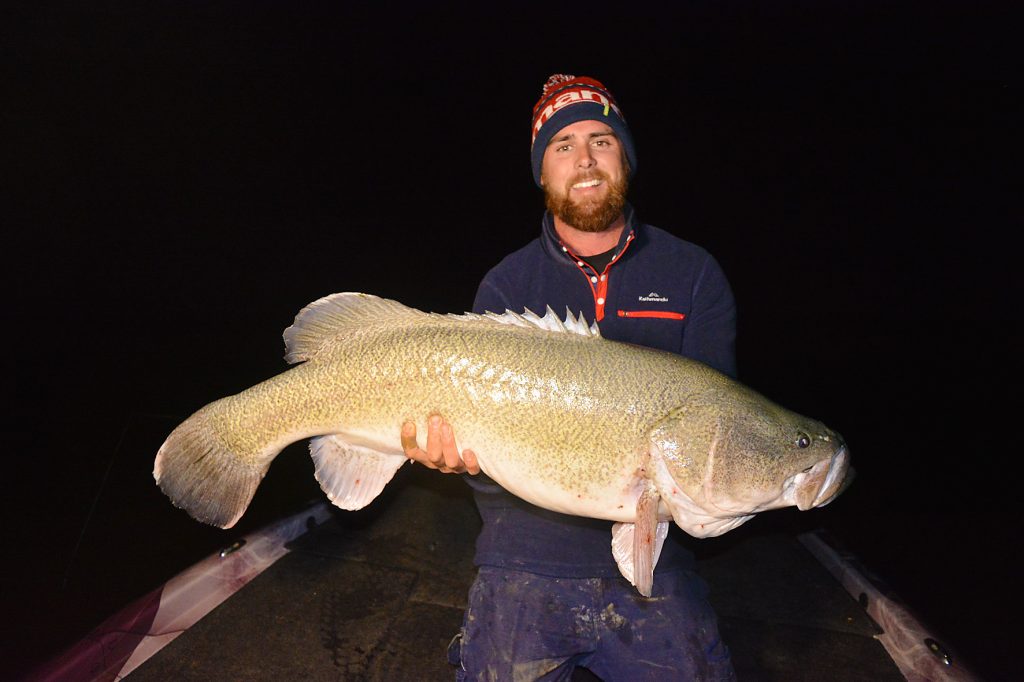 Cold nights and clear skies - A surefire recipe for goodoo. 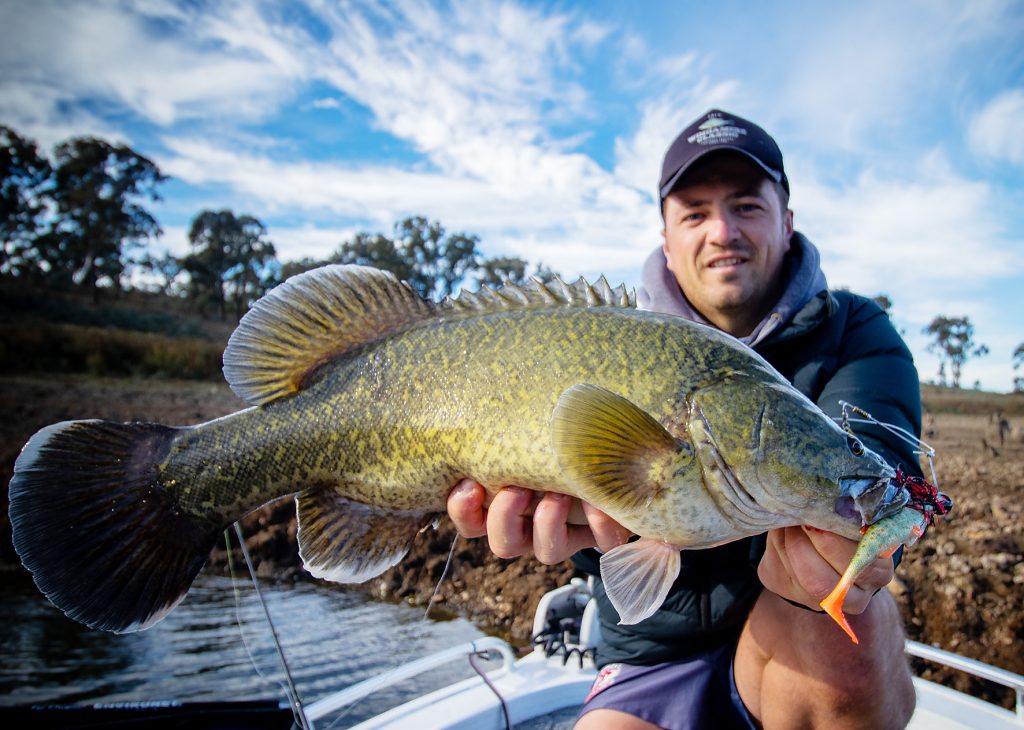 The small ones can give you vital information needed to crack the code. 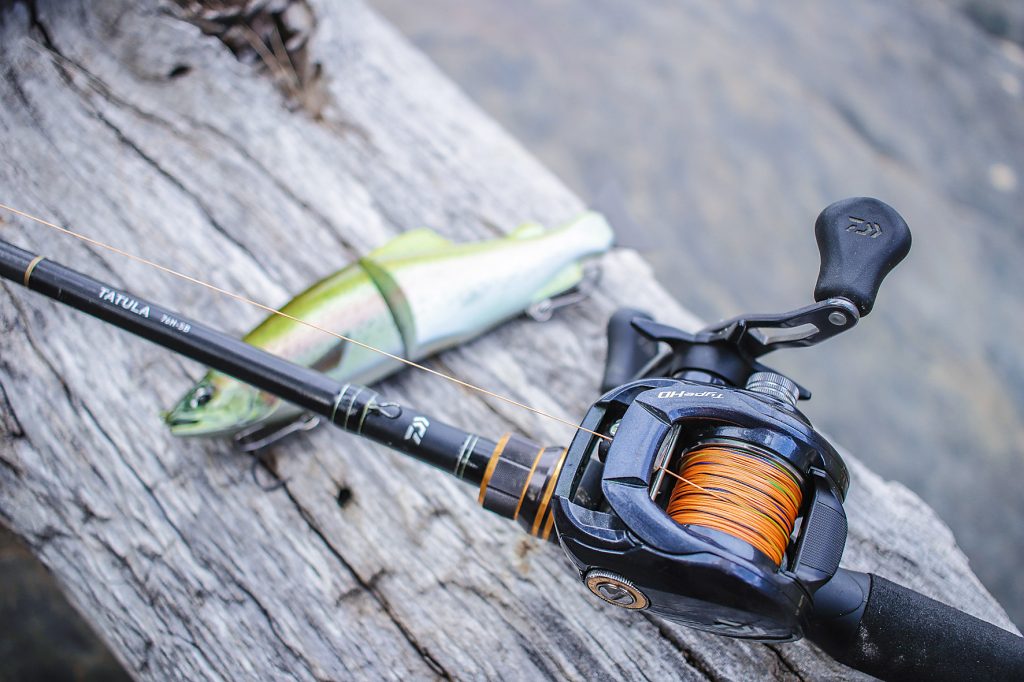 Quality gear will help you win the important battles. 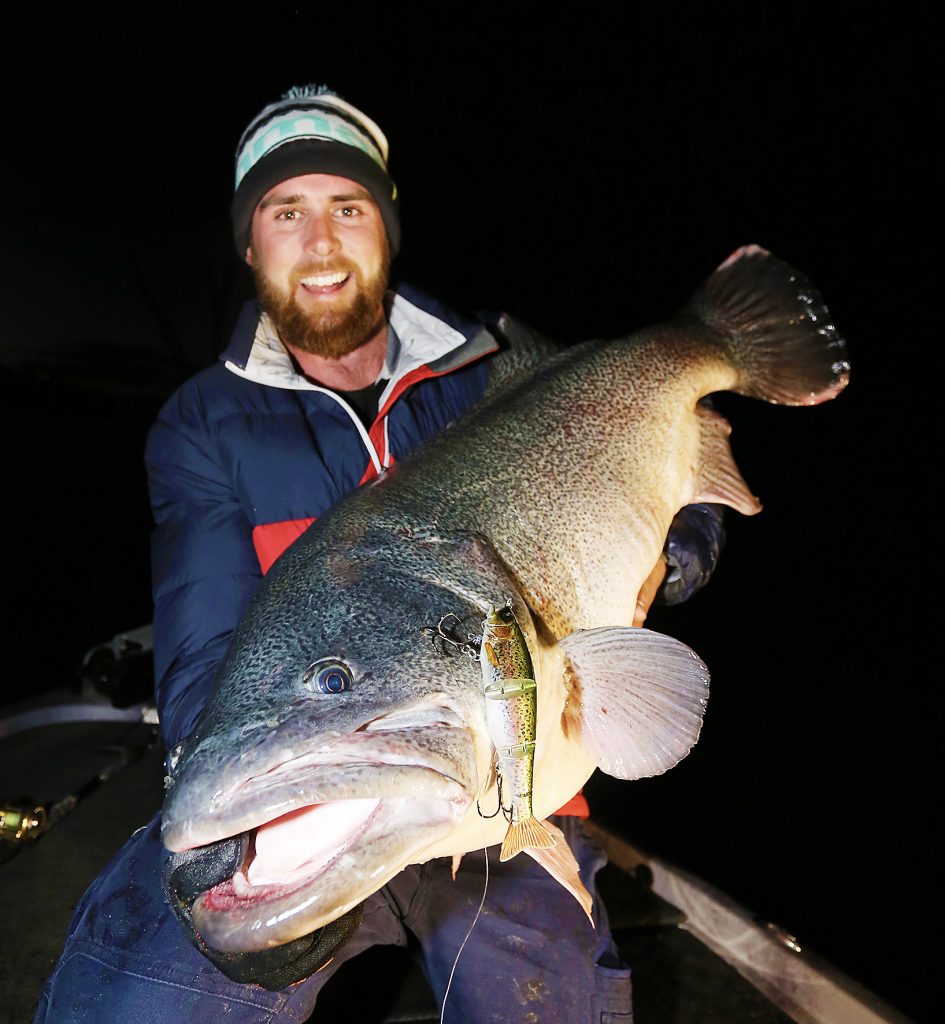 Josh Kopp had a killer season last winter that resulted in numerous metre fish like this one. 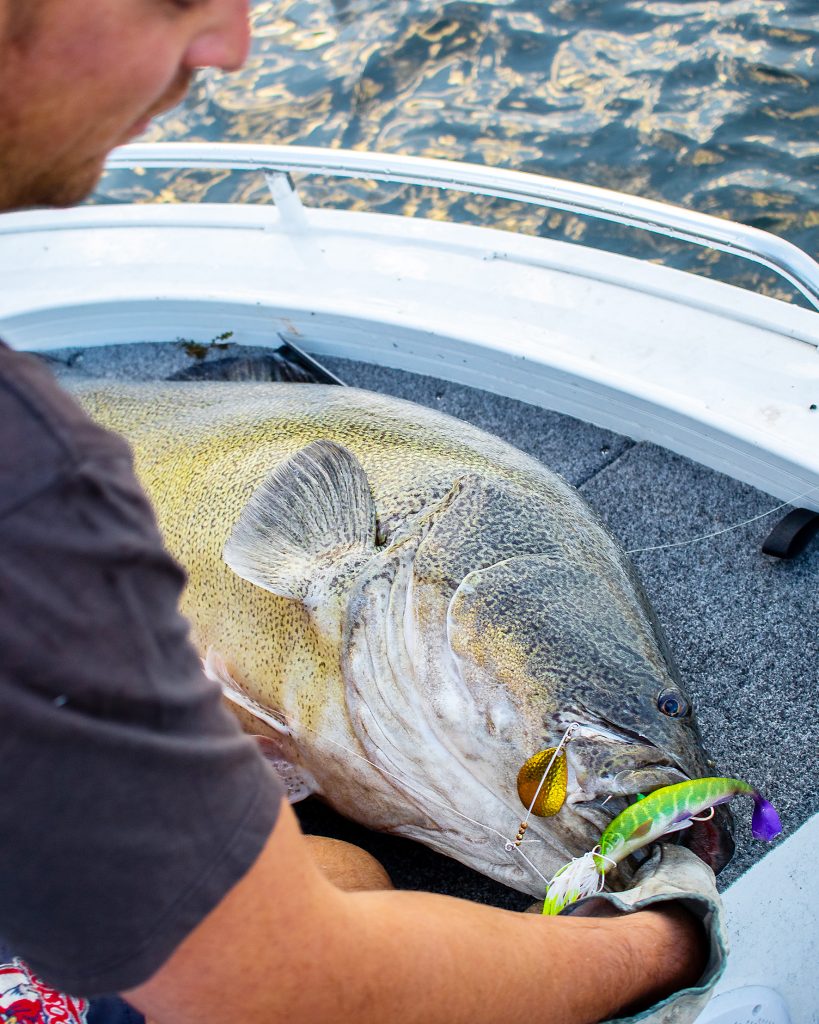 Putting your efforts into the right areas is crucial to success when fishing throughout winter. Bait is the key and finding it is your ticket to success. Using your sounder to scout around and locate congregations of bait is a widely used practice by many seasoned anglers. You don’t necessarily need to find cod on your electronics, as long as you are able to locate bait then it’s a given that the predators won’t be far away.

A good time to scout for bait is during the middle of the day or in periods that aren’t regularly considered ‘prime bite times’ for Murray cod. Bait will be congregated in deeper water under a high sun, but when the light dims down this bait will be pushed up into the shallower margins of the lake by larger predators lurking below. Mark these areas and pinpoint the closest shallow margin to this bait, and it’s here you’ll want to concentrate your efforts when the sun begins to drop.

Of course, Murray cod fishing isn’t restricted to fishing the low light periods and into the night. Often winter is associated with fog, and these low-lying clouds can cover the sun for long periods through the morning, extending the ‘bite window’. When the sun finally breaks through it often means the fish will head a little deeper, following the bait. You can continue to fish the bait in the deep, target fish holding tight to structure or go back to camp, rest up and prepare for another big effort that afternoon.

A common phenomenon in our impoundments is the first light bite and it’s at its most prevalent in winter. It’s all about fishing the shallows, as this is where the bait will congregate during the low light periods for a few reasons.

The main reason is the predation by the larger fish, predominantly cod, pushing them up to the shallower margins. It’s here in the shallowest depths where the bait is somewhat safe from predation during the cover of darkness. It’s when the first light hits the water that the feeding frenzy begins. The baitfish know that they must leave the shallows otherwise birds will smash them, and so they must make a run for it back to the deep. The cod know this and will hold on the outside edge where they are comfortable and pick the bait up as it comes through. You can often see it first hand, and at Copeton I’ve pulled up on banks in the middle of the night, shone my headlight on the water and the amount of spangled perch or bobby cod holding right on the edge is unbelievable.

Often when you find the right areas where the bait is ‘making a run for it’ the surface of the water turns into a ‘bubble bath’ as cod gorge themselves on baitfish just below the surface. It’s in areas like this that your confidence will blow the Richter scale, as it’s only a matter of time until it’s game on.

Having good gear is important when playing the winter cod game, and attention to detail is where most battles are either won or lost.

When you work so hard for sometimes minimal bites, you want to convert them. A good baitcast reel with a strong but smooth drag will be your hero through the commotion following that trademark crunch, and you don’t want to skimp on quality here, it needs to perform.

For the majority of big cod lures these days, a swimbait rod is the stick of choice and with good reason. These rods allow you to throw big baits with more confidence and in turn get many extra metres on your cast. They also give you plenty of persuasion when a big girl doesn’t want to come to the boat. Having a longer cast can be critical in pressured waters where fish have no doubt become aware of the trademark sounds a boat hull emits.

These days the lure market is flooded with plenty of good options. You don’t have to scroll far through your social media feed to see what works well.

Swimbaits are the rage at the moment and for good reason, they replicate a baitfish better than anything else because of their natural presentation. There is a great range of swimbaits available in Australia now, and there’s one out there to tickle every angler’s fancy.

Chatterbaits are another great option for fishing the cold shallow edges of any impoundment. The Bassman Mumbler in the 1/2oz construction is a clear standout in this category, however, like swimbaits there’s plenty of brands out there.

The first light surface bite is a well known cliché in cod fishing these days, so always have a few topwater offerings on hand as well. I believe everyone would agree when I say that you can’t beat catching a big goodoo off the roof.

Lures are important, and some days it’ll be obvious that one style is the only thing they want, but I believe finding the right areas is a lot more important in this game. Cod are an opportunistic feeder and any well-presented lure will often get their attention, however, if you’re in the wrong area and all the cod are three banks down to the right, you’re not going to fool anything there. 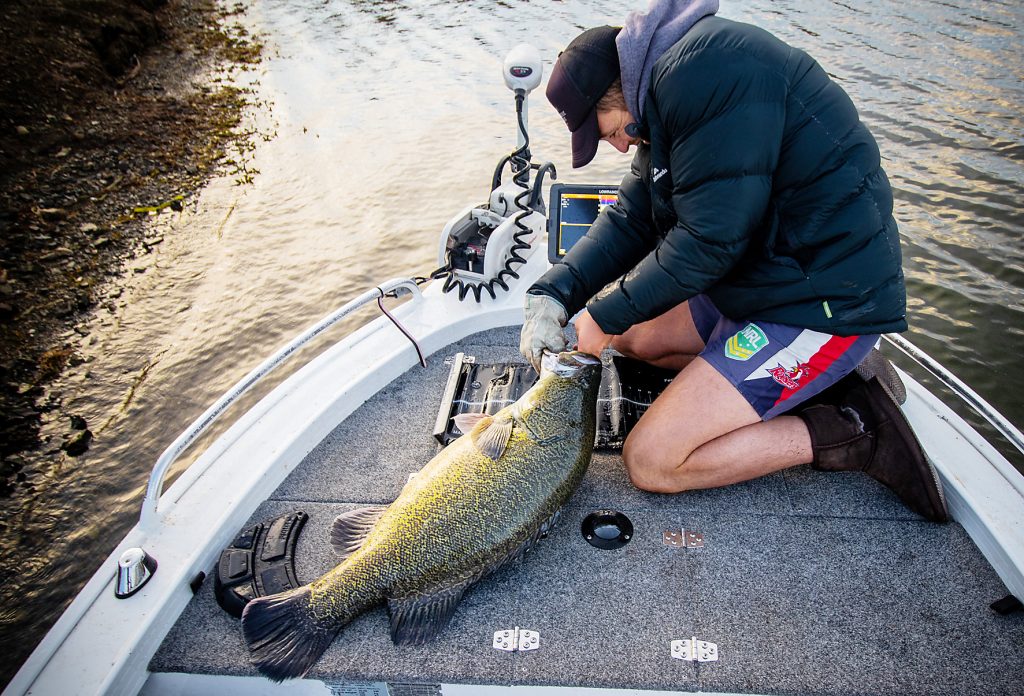 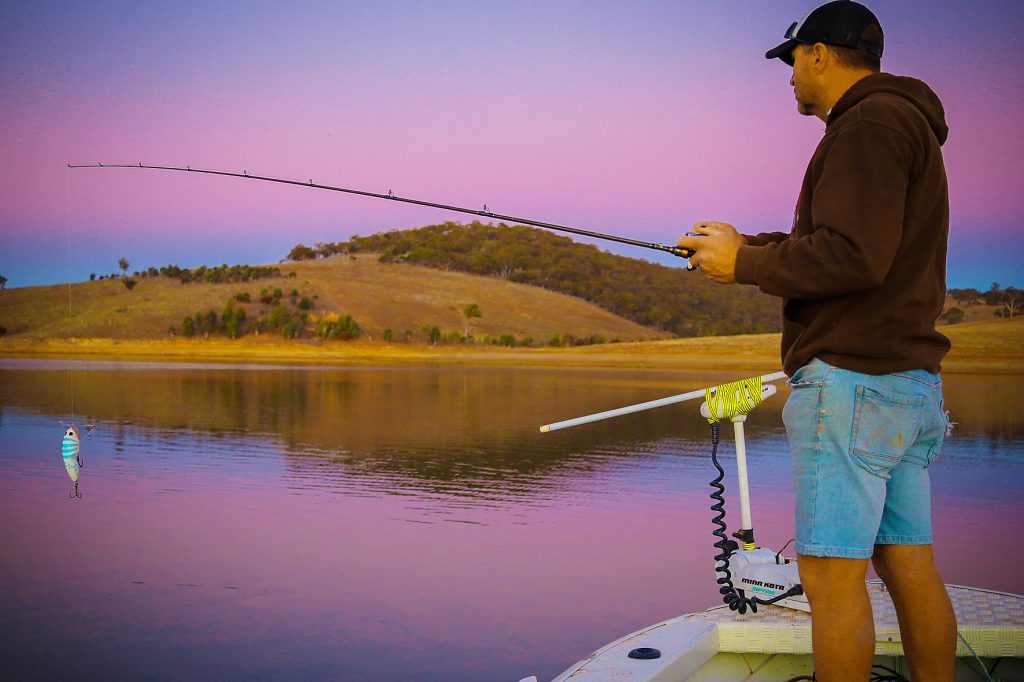 Winter can be a special time to be on the water. 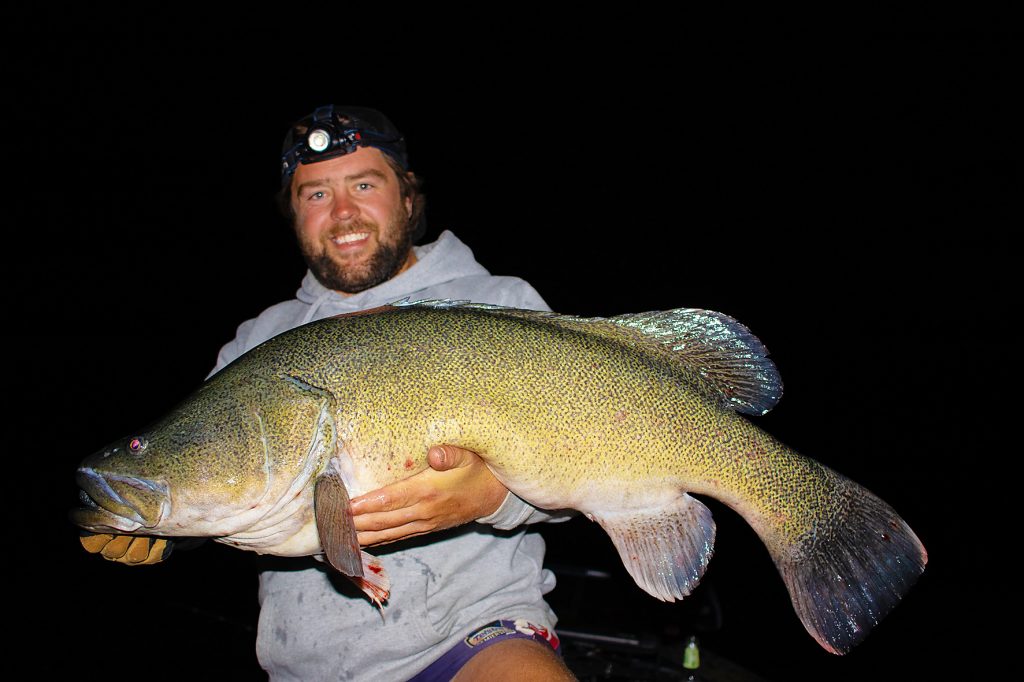 Mark Donnelly with a solid swimbait eater caught at midnight. 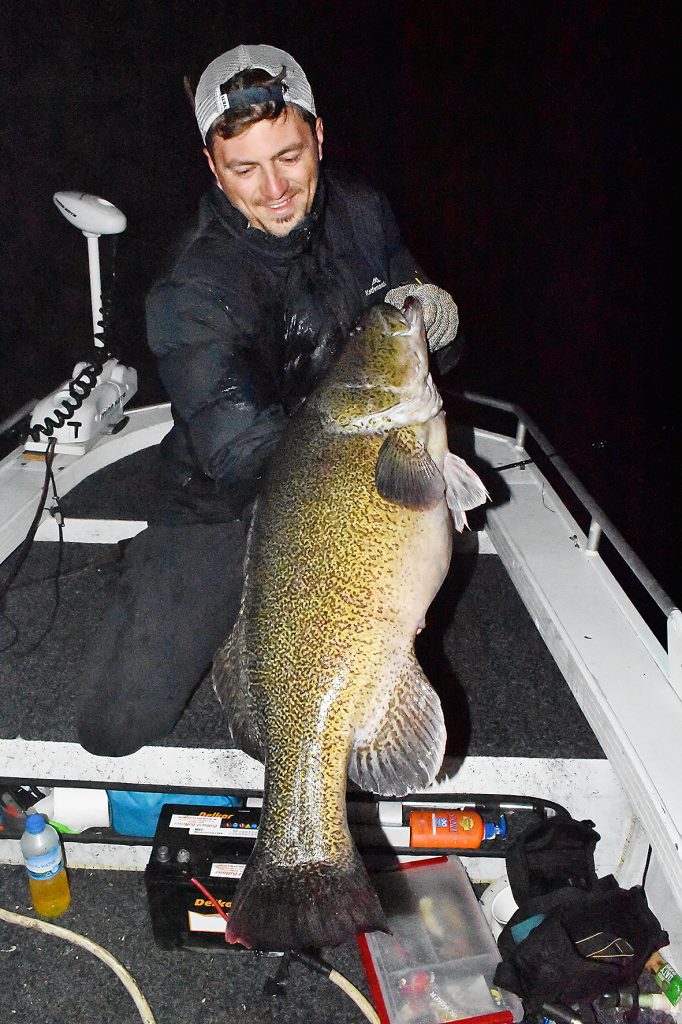 A Copeton cod just before sunrise that ate a chatterbait from a shallow bay that was full of bait.

This isn’t a game for the fainthearted, and it’ll bring an angler to their knees, be that from exhaustion or liberation. Grind, hustle and keep hammerin’. These are all motivation words thrown around by many seasoned anglers who know the rewards they seek.

For me, every trip that results in a duck egg is motivation. I feed off it. I’ve put the effort in and I’ve learnt from another experience on the water. You have to pay to play, as some people say, and it couldn’t be more accurate in this case.

The more time spent out there trying to crack the code, the closer you are to cracking it. Once you do, sometimes the floodgates will open.

Josh Kopp, a very intuitive angler himself, put over 70 Murray cod in his boat last winter from 6 trips, and 11 of these fish were over the magic metre and caught when many other anglers returned home with their tail between their legs. Through the heart of winter Josh was able to locate congregations of bait holding in shallow water and he fished these areas hard for his rewards. Before last winter he hadn’t landed a metery, and this shows that a lot can change when you crack the code.

Keep grinding, find areas that will hold fish, learn from your time on the water, and never give up. There’s no appreciation for something that’s easy. Good luck out there!

by Chris Frith • Golden perch fishing in summer is an iconic Australian pastime. It is synonymous with cool swims to avoid cooking in the heat, and avoiding the midday mercury peaks with shady retreats […]

The changing face of Lake Eildon

by Steve Vidler • Over the last decade or so Lake Eildon has undergone a massive change in regard to angling opportunities. Once the centre of Victorian anglers’ attention for large trout during the cooler […]