On any given day, rain, hail or shine you only have take a glimpse at any pier or jetty around the coastline of the Bay and one, two maybe more anglers will be standing with rod in hand trying their luck at catching something.

Port Phillip Bay is a mecca for land-based anglers, whether it is flicking for bream along a wharf in the CBD, casting for squid at Portsea Pier or flathead on the sand bars at Altona, The Bay has thousands of land-based options on any given day.

Some say fishing is about luck but this is further from the truth. If fishing was easy, we’d call it catching and we’d quickly get board of it.

Although to some fishing might be a challenge, it is best to change your tactic’s and find ways that will bring on success rather than just sitting down, bored, waiting for a bite.

Regardless of where you’re fishing in The Bay, rather than just hoping to catch a fish, pick a particular species and target it. When I write, “target it”, I mean learn about, work out where it lives, where it feeds, what it feed on, how big its mouth is, how big they get, in what water column do they feed etc. All these questions can be answered indirectly by looking at your local fish ID guide and even by looking at pictures of fish.

Take an Australian salmon for example; they have a big mouth (use a 1/0-3/0 hook), they are constantly on the move but like to chase baits into the shallows or around reef (fish off Mordialloc pier, Sorrento pier, Queenscliff pier), they eat baitfish (use blue bait or white bait), they are a schooling fish (use berley to attract them) and they feed throughout all water columns (use a paternoster rig).

With a little research, you can really enhance your fishing rather than not catching anything at all.

With so many land-based options in the bay, your best to pick a targeted species and do the research on where is going to be the best location to catch it and when. 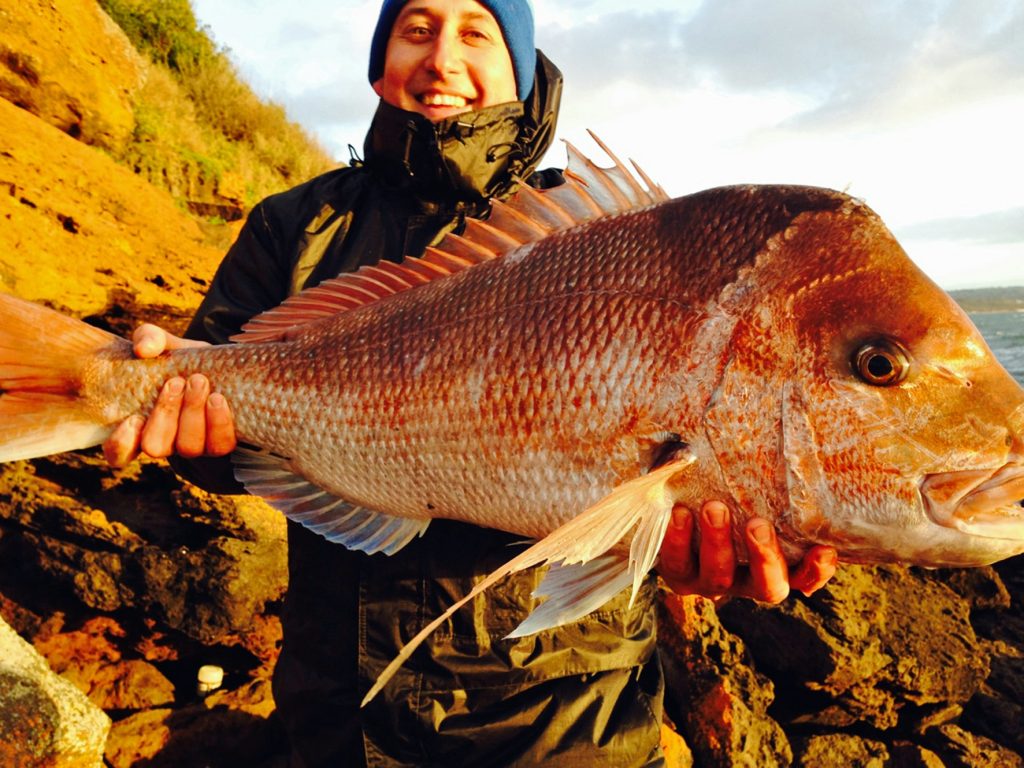 Throughout the winter months, the Mount Martha Rocks are known for producing snapper during a strong westerly blow. Dave with a cracking snapper only dreams are made of. 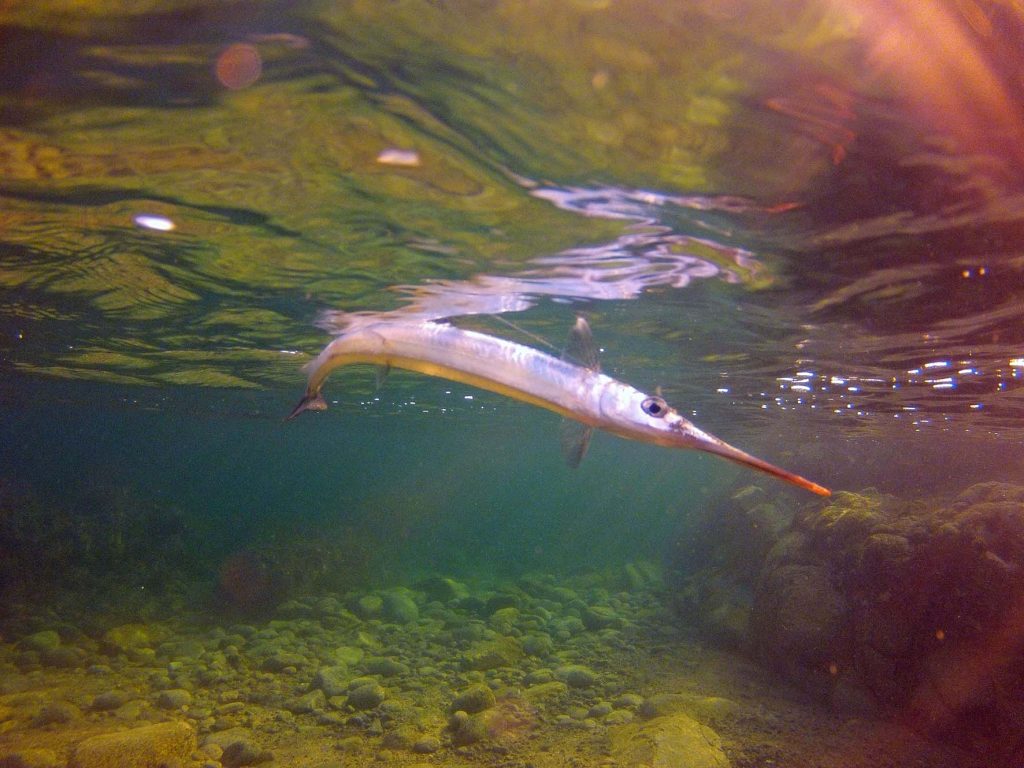 When the weather is good, garfish will never disappoint. 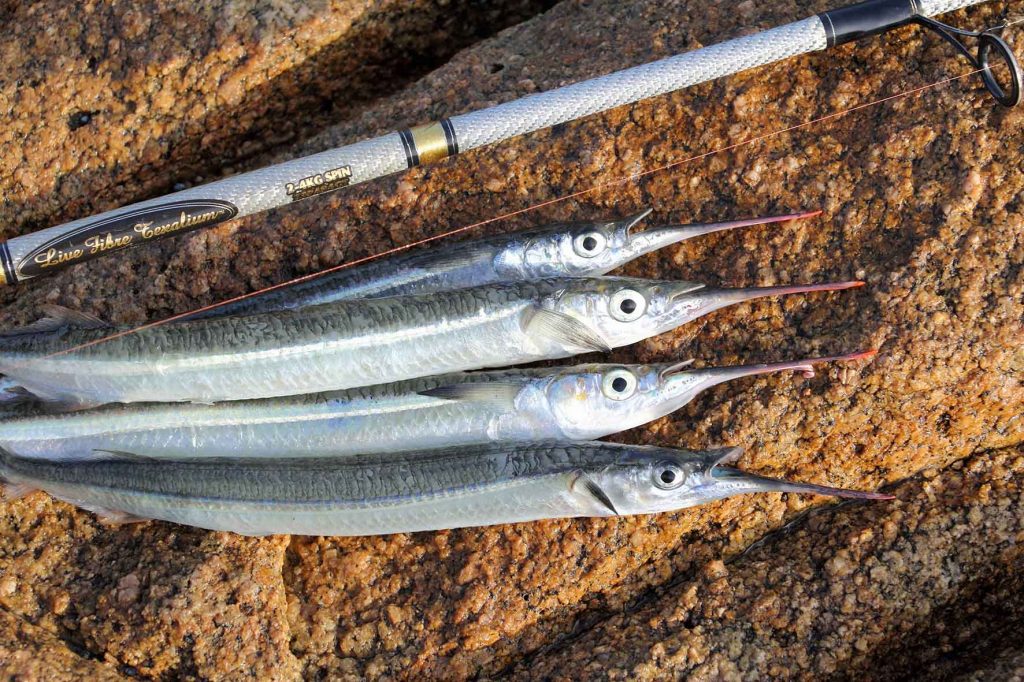 When the sun is out and the tide is high, fishing for garfish from the rocks at Mount Martha is profitable. 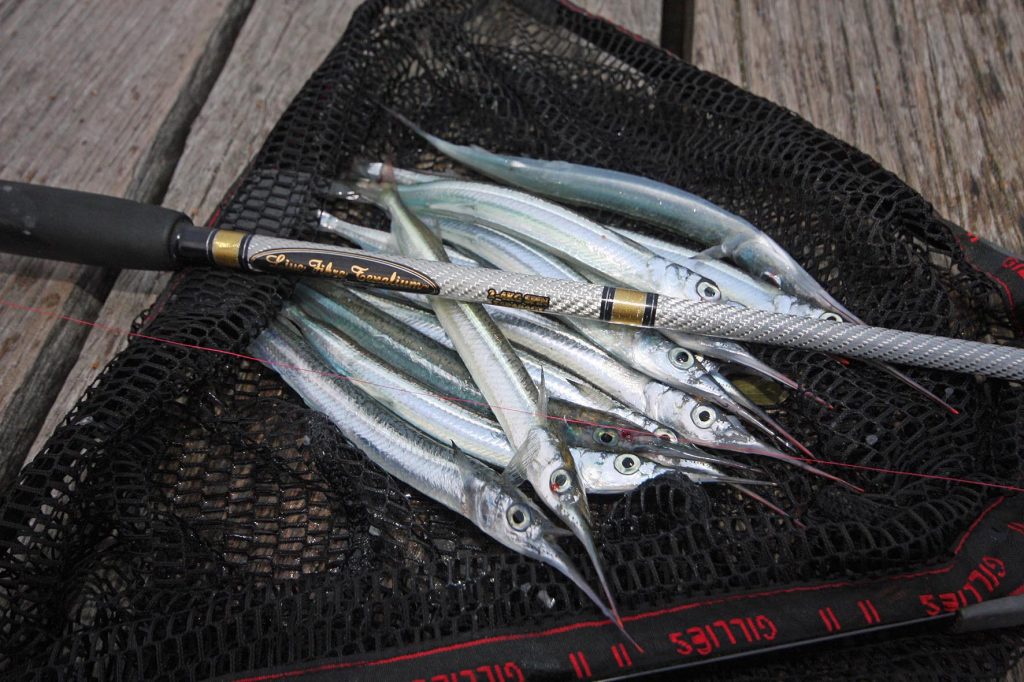 Garfish are also a popular catch during the early morning or late evening. High tide is always the prime time with the Frankston jetty being the hub of activity. 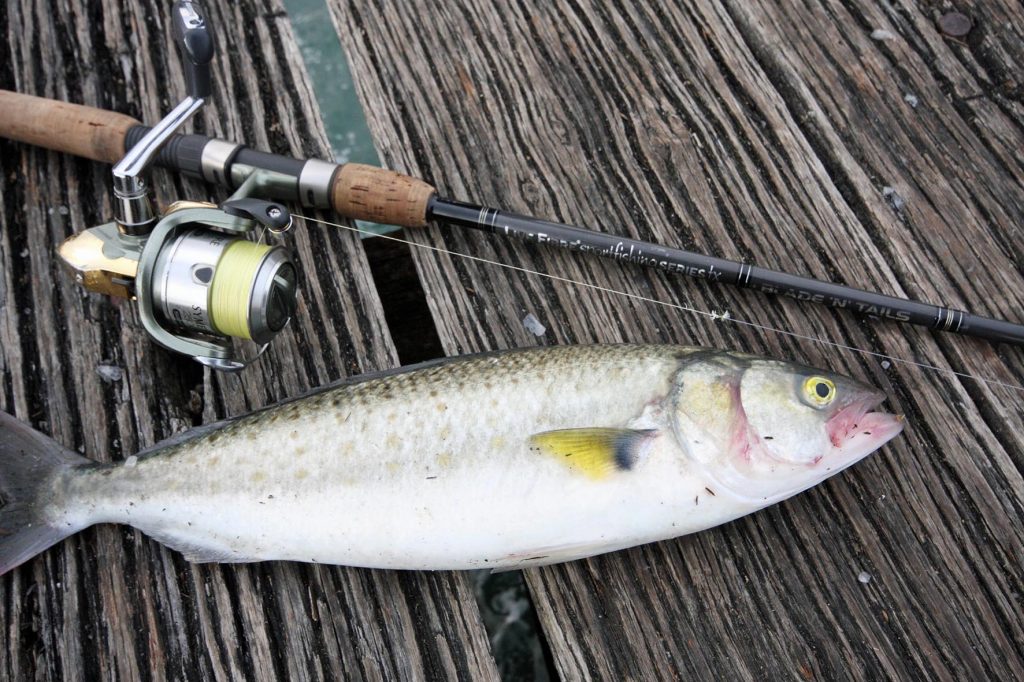 When winter sets in, salmon infiltrate the Bay. During a strong southwest, northwest or westerly wind, salmon will be in plague proportions along the eastern side of the Bay. A little berley will bring them to your fishing location. 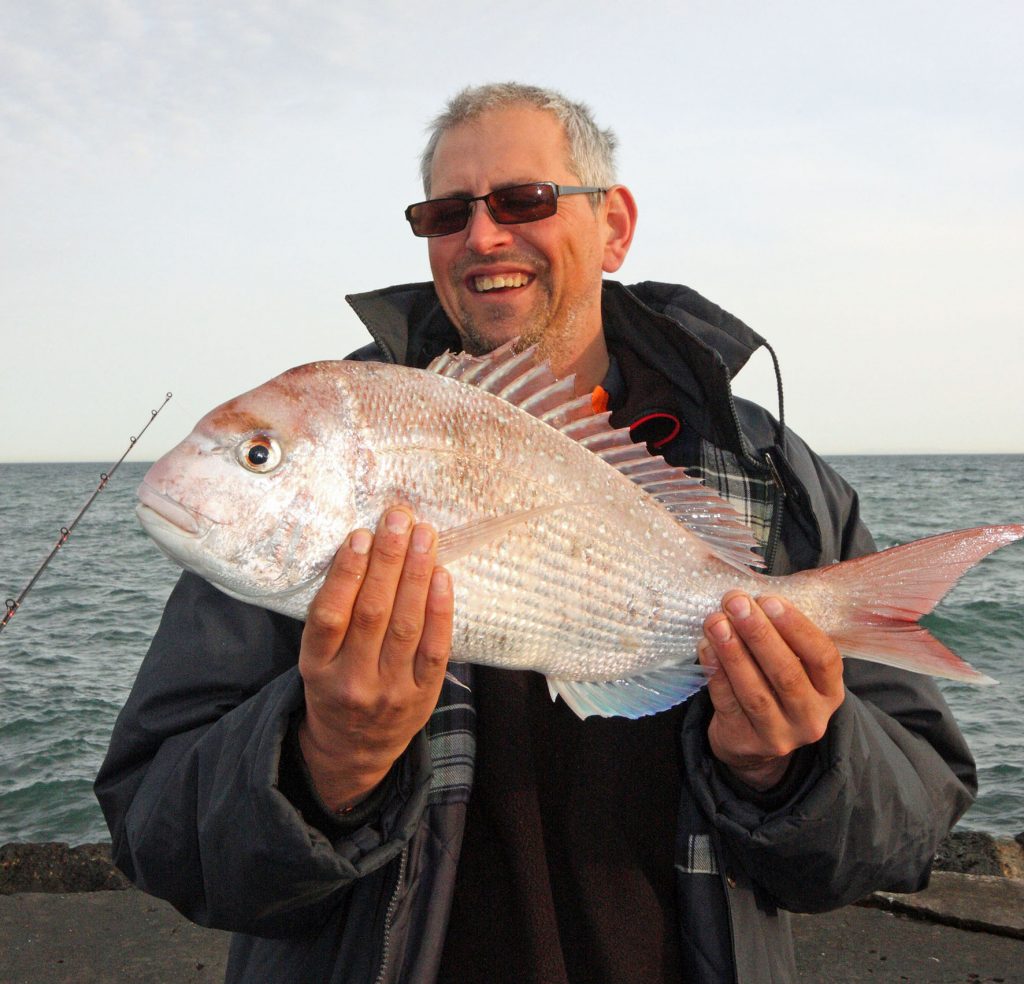 The Morning Pier has a reputation of producing snapper in the warmer months but don’t underestimate a strong westerly blow in winter either.

Snapper are the most highly sought land-based fish around Port Phillip Bay, but, few anglers actually get to hook and land them. That is unless they are in tune with the goings on of where and when they will be at particular locations.

Land-based snapper fishing is as popular as it was back in the 70s and 80s when genuine 20lb reds would plucked from the rocks at Limeburners and Grammar School Lagoon on Port Phillip Bays Western coast. Though these two locations where a hot topic back in the day, Mt Martha Rocks, Mornington Pier, Mordialloc Pier and Beaumaris Bay jetty are today’s standout land-based locations.

From September until the end of November are the peak months but if it is snapper you’re after, don’t even consider fishing in calm weather. In fact, choose the total opposite, a howling westerly or southwesterly wind is when the fish will push in close to the eastern side of the bay. Locations such as Mt Martha rocks and Mornington have good reef structure that abound around the areas and with baitfish and other potential foods getting forced in close, those fishing from the land have a very good chance at catching quality fish.

All of the above locations have the potential of producing 20lb snapper with Mt Martha Rocks producing fish almost that size in 2014.

Fishing for snapper land-based isn’t the easiest of tasks, especially when attempting to cast into a 20-knot head wind. In this situation, opting for an ICON Long Cast Rig is a good option, or alternatively, an elevated running sinker rig.

Bait selection is also critical, as you will usually only get one chance as hooking a solid fish. Pilchards and fresh calamari rings about the best, so if you’re going to pursue a land-based red, use the best baits you can.

Salmon are notorious for rounding up baitfish into the shallows before absolutely destroying them. The mainstay for land-based anglers throughout the year, salmon can be caught both from a pier, beach and from one of the many surf beaches along the coast.

More frequently caught in the surf during the winter months, salmon can be a lot of fun for any age group targeting them. Piers such as Queenscliff, Altona, Sandringham, Mordialloc, Patterson River mouth, Frankston, Mornington, Rye, Blairgowrie, Sorrento and Portsea are the main piers in which to catch salmon regularly.

Though just casting out lone bait might conjure up and odd fish, establishing a berley trail will bring in an entire school.

The ideal rig for salmon is a paternoster rig that can be used either from a pier, beach or in the surf. Bait selection doesn’t have too be too critical, but pipi, blue bait and white bait seem to be the top choices.

Simply place berley pellets into an onion bag and hang over the side of the pier and cast your baits into the trail about 5m out. The salmon will pick up on the smell quickly and hone in, devouring your baits.

Locations such as the Patterson River mouth are a little different than fishing from a pier. Spinning with small 15g metal slugs is the preferred method, but you will have to wait and fish from the rocks in the rough weather. During winter with a 20-knot westerly wind blowing, cast towards the city bringing the lure across the river mouth. Any salmon hiding amongst the wash will set up on the lure very quickly.

Garfish are evidently quite a popular species for land-based anglers. From the piers, particularly Queenscliff, Portsea, Sorrento, Mornington, Seaford, Frankston and Mordialloc they are abundant for most of the year yet and in greater numbers around August, September and October.

There might not me any sport attached to garfish fishing but on the plate, they are a delectable species.

Garfish really aren’t that difficult to catch, but often anglers use too heavy tackle and miss a substantial amount of fish.

A mid to top water feeder, garfish are primarily caught when using a float setup. Not any old float will do though, most tend to use a cheap bobby cork float but with most garfish weighing berley 150g, pilling a bobby cork float beneath the surface won’t happen and you’ll more than likely miss the bite. A pencil or quill float is best offered in this situation.

Garfish also have very small mouths so keep hooks small. In all cases, I have found Mustad’s 4540 1/2 long shank to be the best hook for gars.

Garfish are easily attracted with berley but it must be fine particles otherwise you’ll over feed them and find it more difficult to catch them. Providing you do get the right trail going, small baits such as silverfish, dough and peeled prawn segments make top baits. Just keep them small enough that they can be inhaled rather than picked at.

Some of the better locations tend to be from Safety Beach, Mt Martha rocks and the Mornington Pier where anglers can easily be fishing in 3-4m of water with a simple cast from the sand, rocks or wood. Whiting are quite easily spooked, so fishing early morning, late evening or into the night are the prime times when there is less boat traffic on the water.

Berleying for whiting is a non-event, mainly due to limited tidal flow required to carry the berley vast distances. Instead, casting good baits such as fresh calamari strips, mussel or pipi baits will do the job.

When fishing for land-based whiting you will only get one chance at hooking them and if you miss, you could spook the school. Ideally, use a paternoster rig with two size 1/0 KL circle hooks. That way, the fish hook themselves without your interference and the risk of losing a fish is much lowered than if having to set a hook when using a long shank.

Land-based whiting fishing is certainly a patience game and while a half dozen fish for a session might not seem a lot, it is a very worthy catch when fishing from the shore.

GIVE IT A GO

Land-based fishing, regardless of where you’re fishing in the state, can be a challenge on any given day but it is the research of a species and knowledge of a location that can bring on regular success.

The next time you’re heading out in search of a fish to put on the table, do the research, find out all there is to know and expect to catch it. You’ll be surprised at how your fishing tactics can change and how easy success will become.

by Jason Tanti • Right in the heart of the Melbourne CBD, Albert Park Lake is a unique fishery, and with a diameter of 5km there’s plenty of room to have a fish.       The […]