When Fishing Monthly asked me to be part of the Murray cod feature for the December edition, I must say, I got a little excited. So much of last season’s learning had not had time to exit the pen onto paper and this would be the perfect opportunity to share some of the on water action that made last season so memorable.

Where to begin is I guess the biggest question, as we tried so many new techniques. We ventured down the soft plastic road and smashed home some excellent results landing several very nice cod on a range of different plastics. This was a method I had wanted to try for a while and was very pleased with the new ground and opportunity we had opened.

A short time after, we dragged out the fly and took a sport of gentry and took it into the world of swags, campfires and Murray cod. Several solid Murray cod on fly has fuelled something that I had always perceived to be well beyond my reach, when in truth, it was always there and ready for the taking.

Add to this a range of giant wake baits and surface lures that attract the larger end of the green machine and there’s much to come once the season starts.

I reread my email to see how many words were allocated for my piece and found that my section of the cod yarn was to be done on trolling. So often I brush across things in my haste to get to where I am going that I miss the things I should have seen. So no soft plastics or fly this time, and the wake baits will have to wait. While we were very busy honing new skills last season we did continue to build our knowledge on trolling with some very surprising results that might see you change a few things you try on the water this coming season.

While most of us have the basics of trolling worked out we need to continually push to improve. Last season we were to revisit the art of trolling spinnerbaits with some excellent results. While most native anglers are proficient at casting spinnerbaits, not many take the time to see the effective nature of these lures on the troll.

While single armed models can be trolled, you’d do far better to use either the DT model or the new 4×4 range from Bassman. The arms and blades on these styled spinnerbaits work somewhat like a canopy creating plenty of lift and flash. The canopy effect on these models also helps minimise snagging, which is a real positive when trolling structure. We found the best results on the troll would come from water depths of 3m or less, depending on water clarity. If the water was really clear we would regularly pull fish from a depth of 5m. 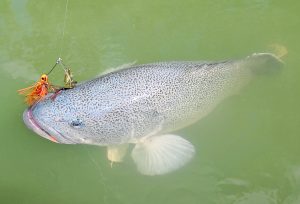 Another plus sized cod taken on the troll using a Bassman 4x4 spinnerbaits. 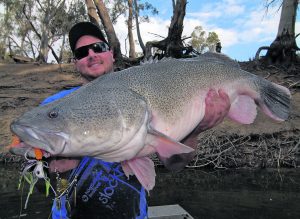 Kris Stiglic trolled this solid cod out of less than 2m of water on a spinnerbait! 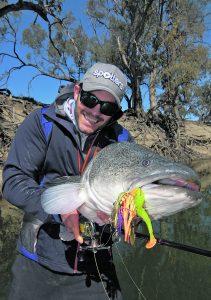 Dean killing it again with this lovely example of a river dwelling Murray cod. 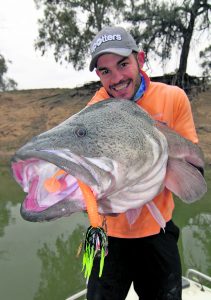 As with all forms of trolling, the real benefit comes from presenting your lure to hidden snags that are otherwise not fished. This past season we trolled some honking cod on spinnerbaits from seemingly barren stretches of river that most other anglers roared across in search of greener pastures. Many of these fish were caught in less than 2m of water in areas that we too had passed over at one time or another. The best fishing practises, regardless of your level, are to slow down and take it all in.

While you can troll with a petrol motor, the results fall well short of the stealth like presentations associated with the use of a good electric motor. While an electric motor is so much quieter than a petrol, they also provide you the luxury of being able to drop the speed down so the lure holds depth. Remember, with several rotating blades caching water the spinnerbait will want to climb if you are traveling too quickly.

Trolling spinnerbaits is the opposite of hardbodied lures in that you don’t pause when you bump up against a snag, instead you grind your way through the timber keeping the spinnerbait upright and moving forward. If you pause and allow the spinnerbait to fall over you will spend all day going backwards to retrieve you lure off the snags and believe me, this is no fun and incredibly frustrating to say the least.

We still run a stinger soft plastic trailer when trolling as it vastly improves the hook-up rate.

If you have never thought about trolling spinnerbaits, why not give it a run this coming cod season, as you may be pleasantly surprised by the opportunities this style of fishing provides.

by Kasper Lenigas • Spanish mackerel and wahoo are by far one of the most targeted and sought-after pelagic species offshore during our summer pelagic season. Not only do they taste great, they’re also excellent […]

by Stephen Worley • Here’s a story that’s not only for the snapper anglers looking for something new, but will hopefully also inspire other anglers to explore new ways to freshen up their fishing. A […]

Back to Basics: Prepare for a wild bass chase