As commercial net fishing winds up in Port Phillip, the prospects of a flathead of 5kg or more are rising. Yank or southern bluespotted flathead can grow to 90cm and 8kg, and it’s not long ago that 5kg and 6kg yanks were weighed in at a local fishing tournament. Encouragingly, a national record for a speared 4.2kg yank from the bay was confirmed just months ago.

Flathead of such calibre are the ‘hook’ for much of the regionally important tourism industry in East Gippsland where dusky flathead lure Melbourne anglers to plan their holidays around waters 450km away, as far as Mallacoota, or even further up the East Coast. On Tasmania’s north coast, what started as a ‘niche’ fishery for large – flathead, mainly among local lure anglers, has grown to the point of being a popular, well regulated recreational fishery.

Now there’s a real prospect of flathead fishing that goes well beyond ‘frogs’ and into ‘crocs’ territory, right here in the Bay. 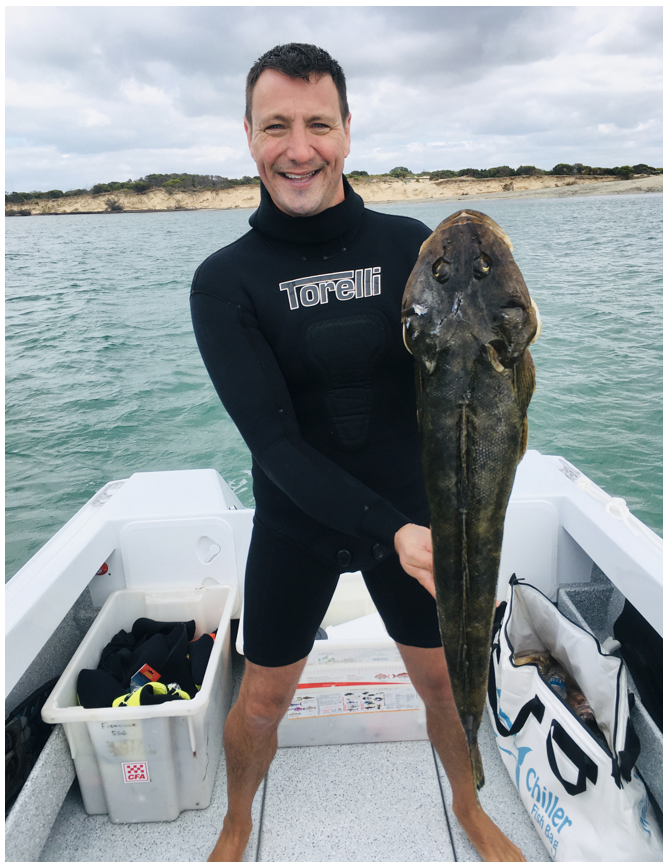 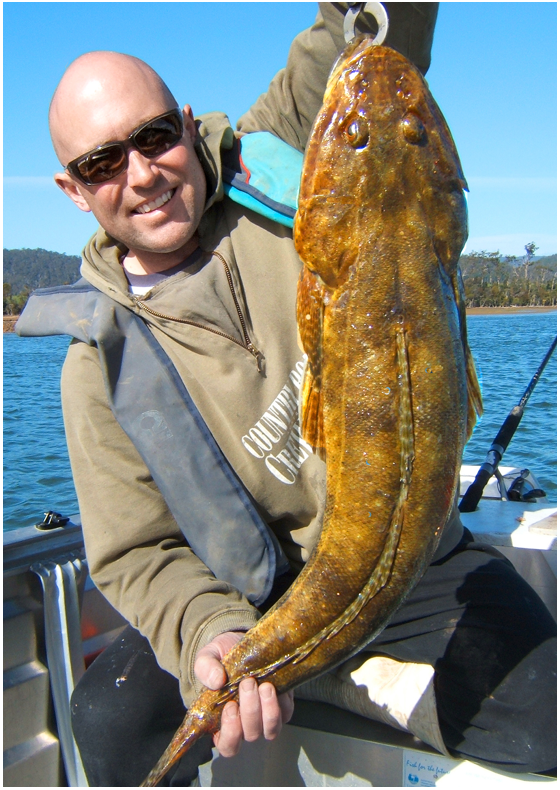 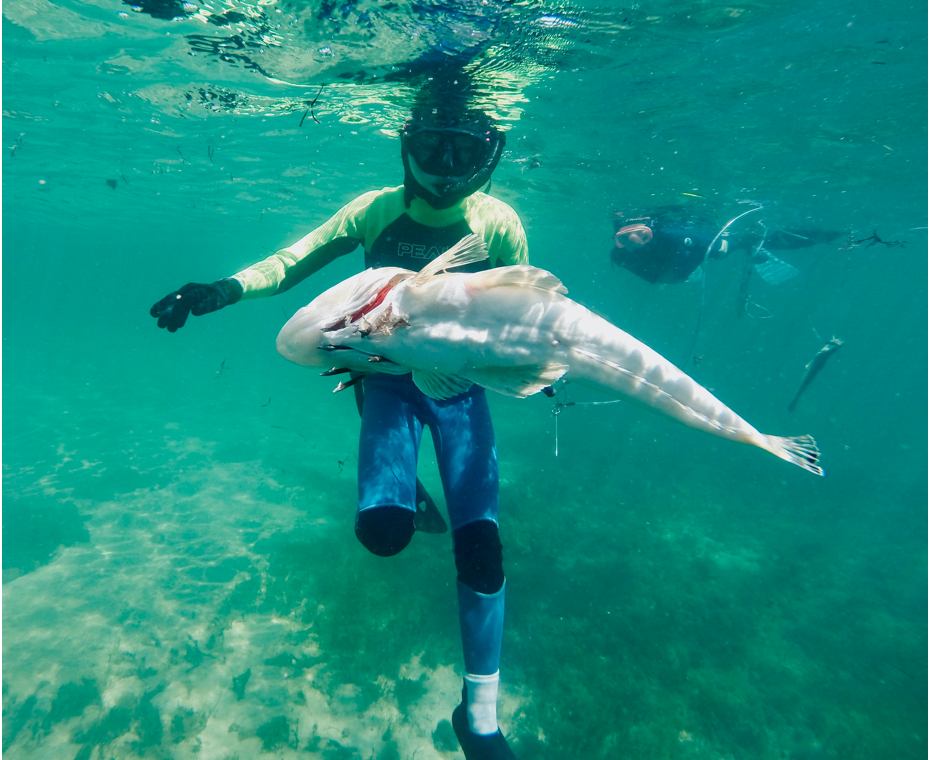 Recreational catch limits should allow for a young spearo like Darcy Hill to keep one large yank (photo courtesy of Jordan Hill). 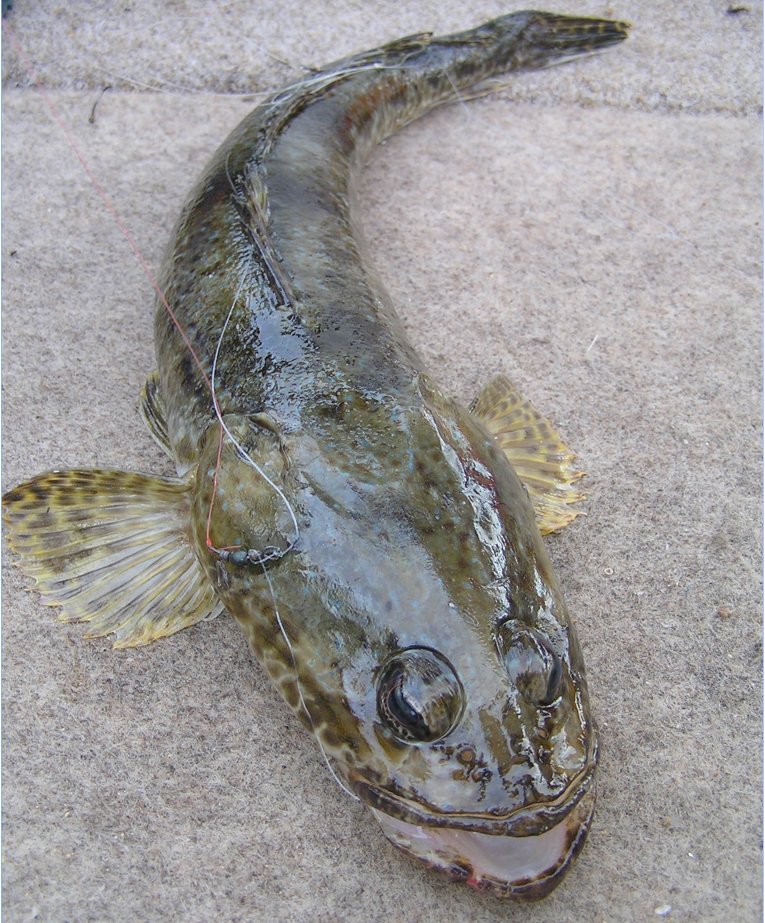 There's a real prospect of yank flathead growing beyond 40-60cm frogs, on to 70-90cm crocs in Port Phillip Bay. 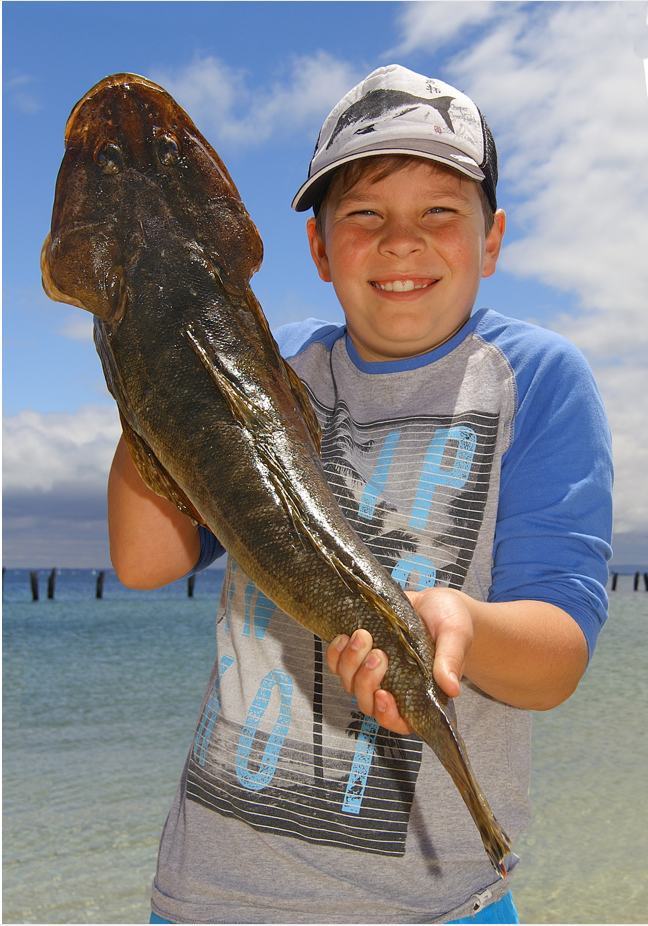 A 2.2 kg yank from the Bay will put a smile on any kid's face (photo courtesy of Geoff Wilson).

Decades of fishing pressure in the bay have thinned out the ranks of 60+cm yanks. Fig.1 shows the lengths of 732 yanks caught under the Victorian Fisheries Authority’s Angler Diary program. Most were between 30-50cm long, which a Tasmanian study suggests are 2-7 years old. Keeping in mind yanks’ potential to reach 80cm, the lack of fish above 60cm long and the steep slope of the right hand side of the graph reflect the high death or mortality rate due, in part, to the impact of fishing.

The 20-year wind-down and, now, the complete removal of a commercial net fishery taking 15-20 tonnes of yanks annually, will help to build this stock overall, and creates the opportunity to rebuild the numbers of 5-8kg fish. This promises to add an exciting dimension to fishing in the Bay. Even at sizes of 40-60cm, yanks have long been a welcome bonus to any angler’s catch and a regular target for spearfishers.

Yank flathead occur from southern WA to eastern Bass Strait, including northern Tasmania. In Victoria, they are mainly taken by angling in Port Phillip and Western Port bays, and Corner Inlet, where they are mainly caught on light reef, seagrass and sandy bottom. Studies in Tasmania and WA indicate that their main spawning period is spring/summer in marine bays and coastal waters.

A Tasmanian University study shows that, initially, yanks grow rapidly, with both sexes reaching 30-40cm in three years. At that stage male growth begins to plateau with few exceeding 50cm and 1kg, while females can reach 90cm and 8kg. They begin to mature when around 35cm, at ages 2-3 years. Almost all yanks are sexually mature at 40cm and four years of age. The management implications of the rapid early growth is that both sexes can be taken before they have had a chance to spawn. A 40cm minimum size would be needed to allow most yanks to reproduce at least once before being taken.

Judging from the lengths shown in the graph, most yanks caught in the bay are less than five years old, although both sexes can live beyond 16 years. Large older mature females are extremely scarce.

In Victorian bays there is no evidence of problems with yanks in terms of sustainability. As they are now virtually a recreational species in Port Phillip and Western Port bays, what’s in question is whether anglers are content to view them as a larger version of sand flathead, rarely exceeding 1kg in size. Or, while continuing to take them under lower catch limits, are anglers prepared to ‘invest’ in building the stock of 2-8kg fish?

The yank stock in the bay has sustained the combined pressure of commercial and recreational fishing for more than a century, but at the cost of the larger fish. So, to accelerate the rate of recovery, there are some lessons to be learned from elsewhere.

For example, despite the removal of commercial fishing from Mallacoota Inlet in 2004, the advent of year-round targeting by TV show-inspired soft plastics anglers seems to have slowed the build-up of large dusky flathead there. While duskies have the potential to grow to 15kg, fewer than 1% of those caught there by anglers exceed the upper slot size, 55cm. In Lake Tyers fortunately, the recent increase in the numbers of duskies of above 55cm suggests that the combination of the slot size and 5/day limit are succeeding in allowing more fish to survive longer to reach larger sizes.

These Mallacoota and Lake Tyers observations point to the need for effective management of fishing pressure on fish within the keepable size range, to enable enough numbers to survive to reach larger sizes.

For another example, on Tasmania’s north coast, a lure-based ‘niche fishery’ for yank and rock flathead has developed in the past 10 years. The rising and effective targeting of super-sized fish prompted concerns about rapid depletion of the limited resource, leading anglers to ask Tasmanian authorities to intervene. A rapid research response from the University of Tasmania aided a solution that looks like a promising model for yanks in Victorian waters: a minimum length of 40cm and a daily bag limit of five of which only one can exceed 60cm, for yank and rock flathead combined.

After more than 10 years of recreational-only fishing in Lake Tyers and Mallacoota Inlet, the VFA’s 2018 survey of angler satisfaction with catches of dusky flathead above the upper slot length, 55cm, found widely contrasting results. In Mallacoota Inlet where few duskies still exceed the upper slot size, 53% of anglers recorded dissatisfaction with catch rates. But in Lake Tyers, where a much larger proportion exceed 55cm, 88% of anglers who mainly fished there reported positive satisfaction levels.

The lesson here is that to build anglers’ satisfaction and support for a ‘big-yank’ fishery in the bays will require a decisive change to the catch limits, in contrast to the decade-long incremental changes to dusky flathead limits in East Gippsland.

Consistency between catch limits for dusky flathead and yank flathead is desirable for the sake of simplicity of regulations, while managing the take of these big flathead species. However, there is one more thing to be considered – spear fishing. A rigid upper slot limit poses an unreasonable challenge for spearfishers and flounder spearers for whom yanks are a popular target species: it’s just not possible to judge which side of the limit a big fish is before spearing it.

Tasmania’s yank flathead catch limit offers a good solution by specifying a bag limit of 5/day of which one may be larger than the upper slot size. In specifying a combined catch limit for yank and rock flathead, Tasmania’s approach is also worth considering for Victoria.

LET’S DO IT FOR YANKS

The same flathead allure and overfishing risk factors that prompted anglers and the VFA to tighten dusky catch limits, also apply to yanks. In East Gippsland, of the 8,700 dusky flathead measured by ‘diary anglers’ during the past 20 years, most were between two and five years old. The sparse distribution of older fish – up to 16 years old – highlighted the work to be done to restore a pool of large breeding females and photo-trophy sized fish.

In response, Victoria has gradually tightened regulations to conserve the larger dusky flathead in East Gippsland. Until 2003, we could take 30 flathead (all species) above 25cm, including two above 60cm. In December 2003, the catch limit for duskies changed to 5/day of which one could be above 60cm. From 2012, the size limit changed to a strict 30-55cm slot. All this was largely driven by the VFA’s and anglers’ shared concerns about the angling pressure on very large females – the major egg producers.

There is a 20-year history of angler volunteers and researchers working together to bring the management of dusky fishing to this point. The same factors critical to developing the dusky flathead fishery apply equally to yank flathead:

• vulnerability to targeted angling; and

Following from the third point is the need to protect the resource from targeted angling for illegal sale. Recently, the numbers of yanks are said to have decreased markedly along the bay shore, between Beaumaris and St Kilda, allegedly as the result of systematic targeting-for-sale. The illegal market for yank flathead will only increase once commercial net fishing ceases in 2022.

There is some evidence that seems to confirm the continuing fish-down of fish in the 60-80cm range. Most of the Australian National Sportfishing Association’s national records for yank flathead are held by members of the Bellarine Light Game and Sport Fishing Club. The average weight of more than 250 yanks recorded by the Club since 1988 is 1.57kg, with eight weighing between 3.03 and 4.25kg. However, despite continued largely catch-and-release fishing in recent years, the Club hasn’t recorded a yank heavier than 3kg since 2007.

Under the present do-nothing approach it will take more than a decade to rebuild the stock of large yanks. If Victorian anglers wish to see a trophy-size yank flathead stock built up, there is no reason to delay action on regulations that offer far greater protection than we have at present.

There is a close parallel between how Victorian and Tasmanian fisheries authorities have responded to targeted angling’s threats to the stocks of large flathead.

In northern Tasmania about ten years ago, catch-and keep targeting of large yank and rock flathead by lure fishers was increasing under the liberal catch limits at the time. Working with local anglers, Tasmanian researchers and fisheries authorities responded to the challenge.

In both Tasmania and Victoria, where yank and rock flathead are taken by spearfishers and flounder spearers, strict slot limits could present a real compliance challenge: how can a spear fisher gauge which side of the upper limit is the fish they are about to spear? Tasmania largely avoided this by allowing one fish – either a yank or a rock flathead – of above 60cm to be taken per day.

In Tasmania, the key compliance issue to be overcome was anglers’ difficulties in distinguishing between yank and sand flathead. If Victoria was to follow Tasmania’s lead, setting a minimum length of 40cm, we would avoid such a problem, as a 40cm sand flathead is extremely rare in our bays. Any flathead larger than 40cm in our bays and inlets is 99% certain to be either a yank, a rock or a dusky flathead.

In both states, anglers have come to regard a bag of 5/day of fish like large flathead as a very acceptable day’s take.

Now that yank flathead are virtually a recreational-only species in the bays, wouldn’t most anglers agree that allowing the continued catch of up to 20 yanks/day, as small as 27cm, is crazy? It’s time to see how increasing the prospect of a 5kg+ yank flathead appeals to Victorian anglers.

by Ross Winstanley • In the post-Millennium Drought period since 2010, no Victorian impoundment has attracted more scrutiny by anglers and been the subject of more fishing-related political attention than Toolondo Reservoir. While the struggle […]