Melbourne Marine Centre loves pimping up Stacer hulls. We tested one a while back when Andrew Stephen and the guys optioned up a Nomad to within an inch of its life. It was a build that focused on practicality, with plenty of exposed checkerplate amongst the creature comforts.

This build, however (a Stacer Crossfire 509), adds a little more luxury to the options. Its owner – affectionately nicknamed Hodor thanks to his likeness to the Game of Thrones’ burly doorman – decided that it was the time in his life to treat himself to the best Stacer that money could buy. And he pretty much got it spot on.

With its front casting deck transformed and elongated with the drop-in platform centrepiece, the casting angler has access to the 24V MotorGuide and the Garmin 7407 with Front Vu – ample information for any lure angler. 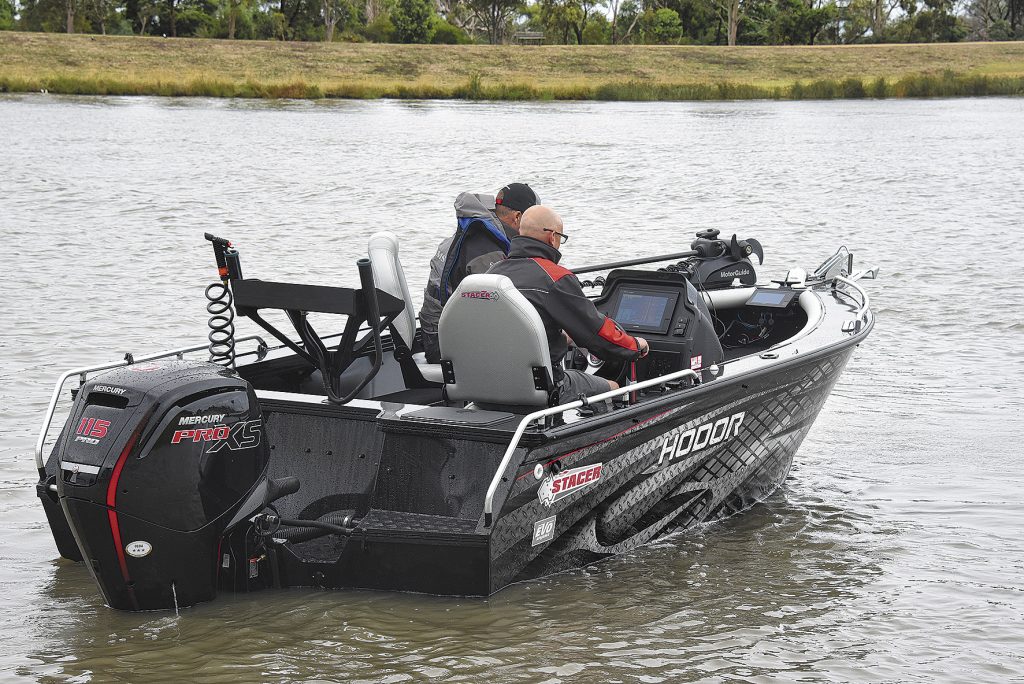 Gale force winds on Port Phillip Bay confined the testing to the National Watersports Centre on the upper Patterson River. 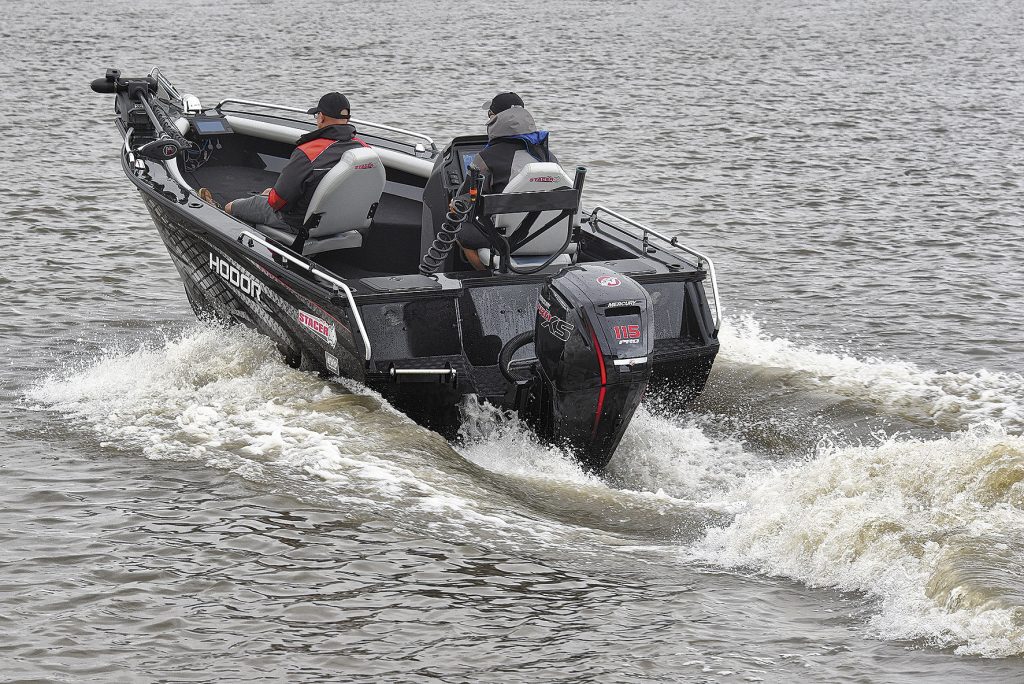 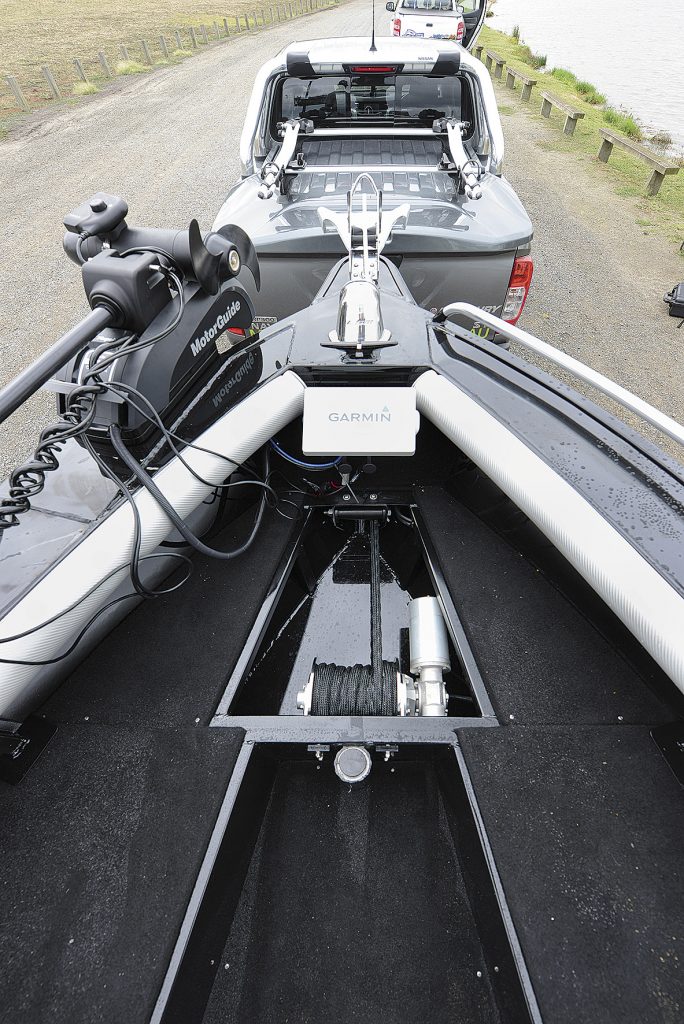 How’s the sneaky anchor winch under the casting deck? With automatic anchoring and electric motor options, Hodor is ready to catch anything on offer in Victoria’s freshwater or inshore waters. 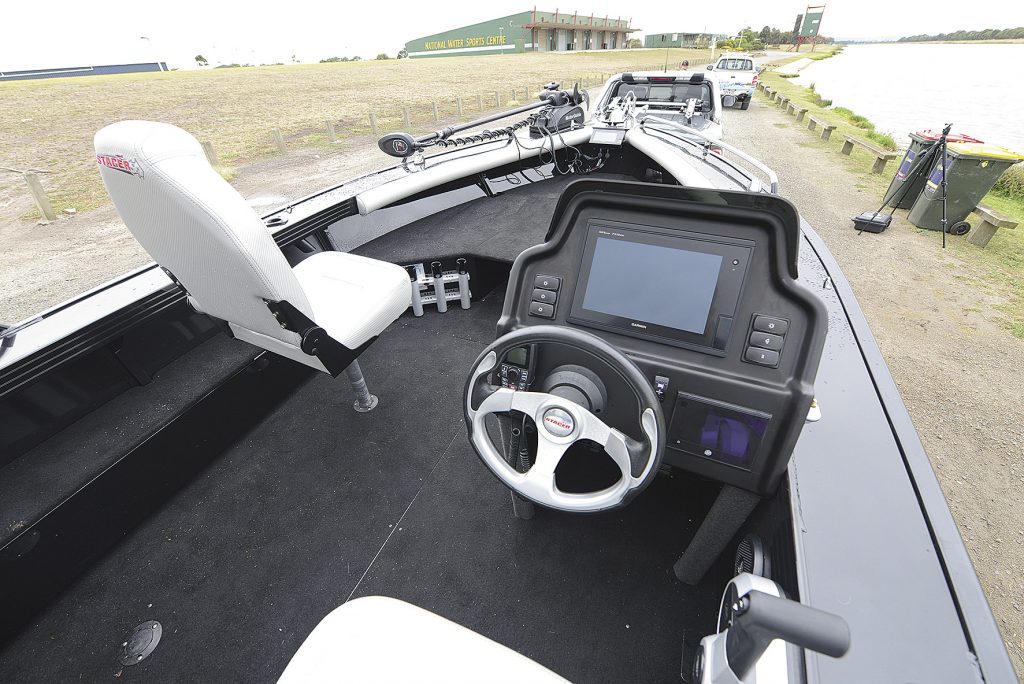 For the amount of accessories, the console is quite clean. Flush-mounted screens always look great, whether they’re on a tinny or a 200 footer. 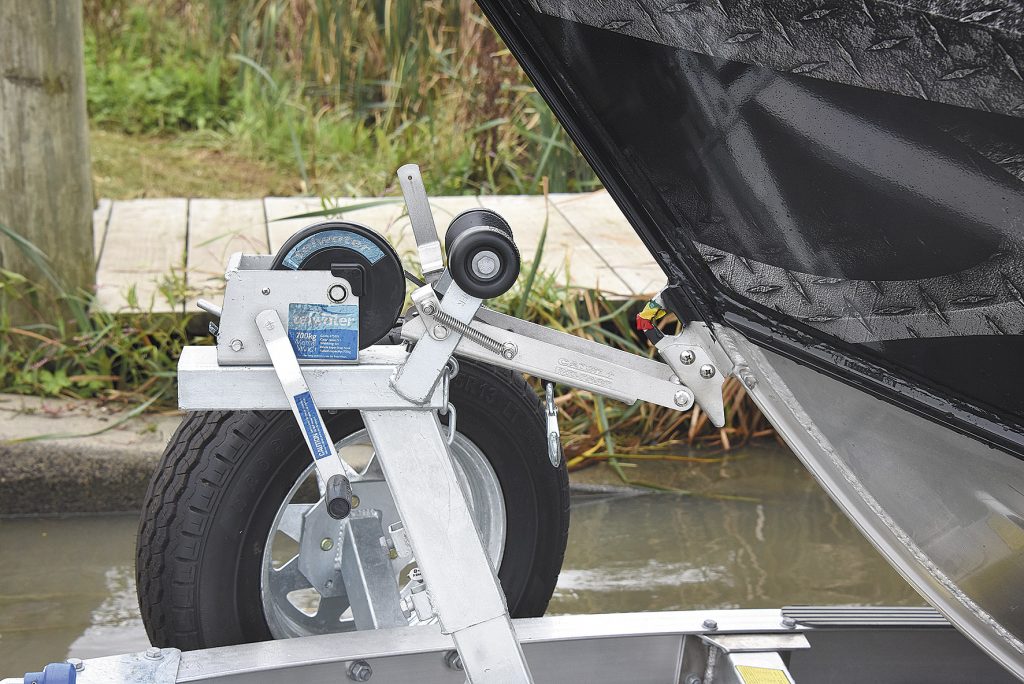 Telwater’s Catch and Release bracket makes launch and retrieve easy with one person. 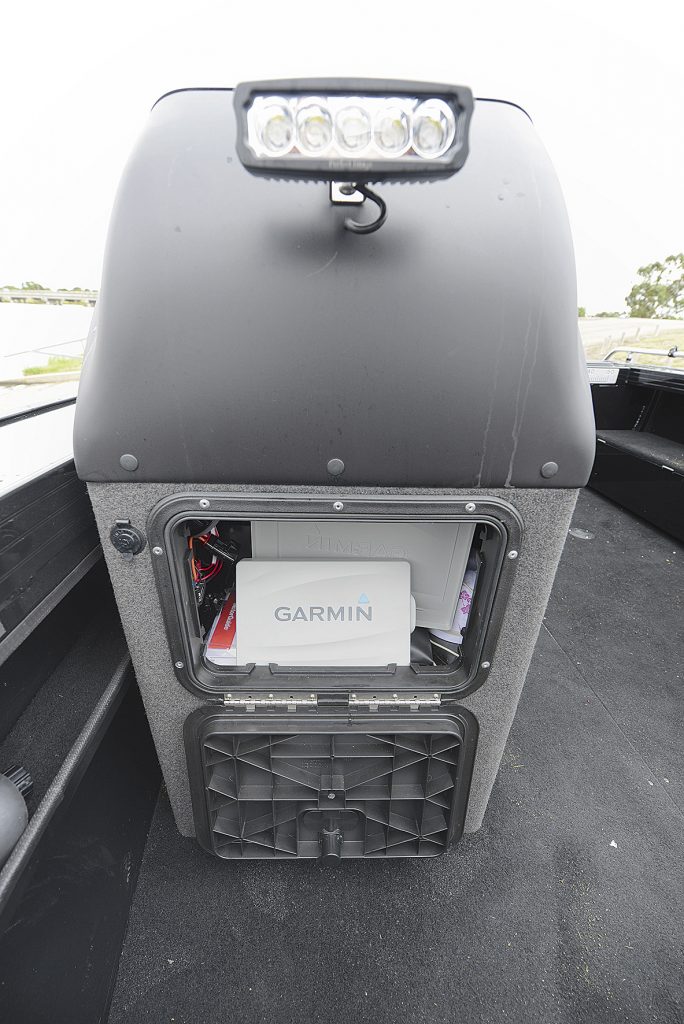 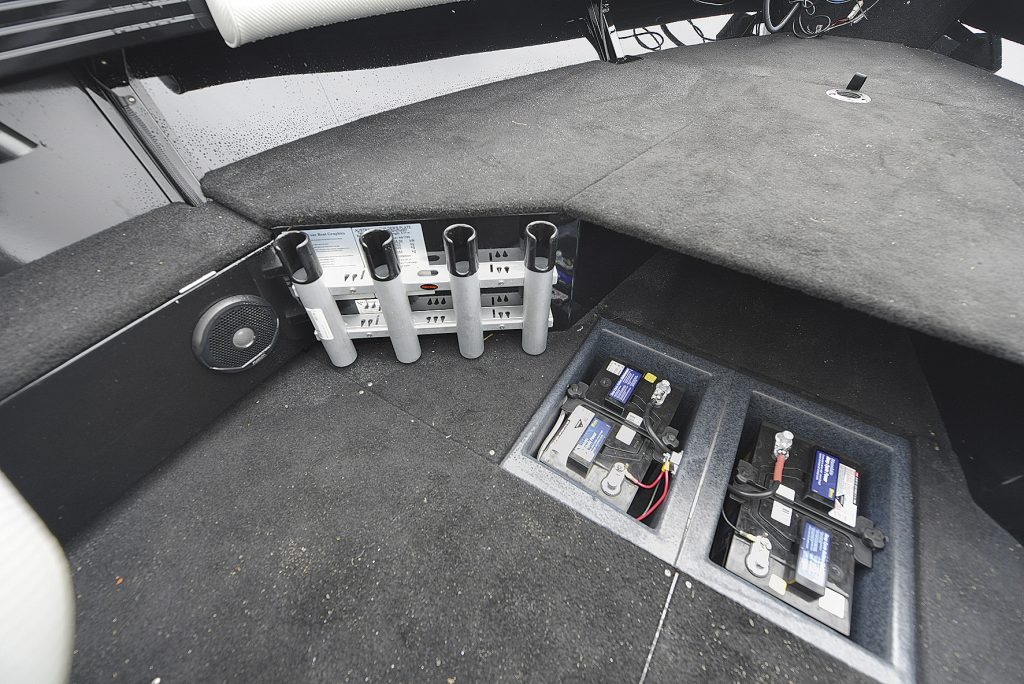 With the main bulk of batteries for the 24V Motorguide amidships, Hodor is quick onto the plane, yet still keeps its bow up. 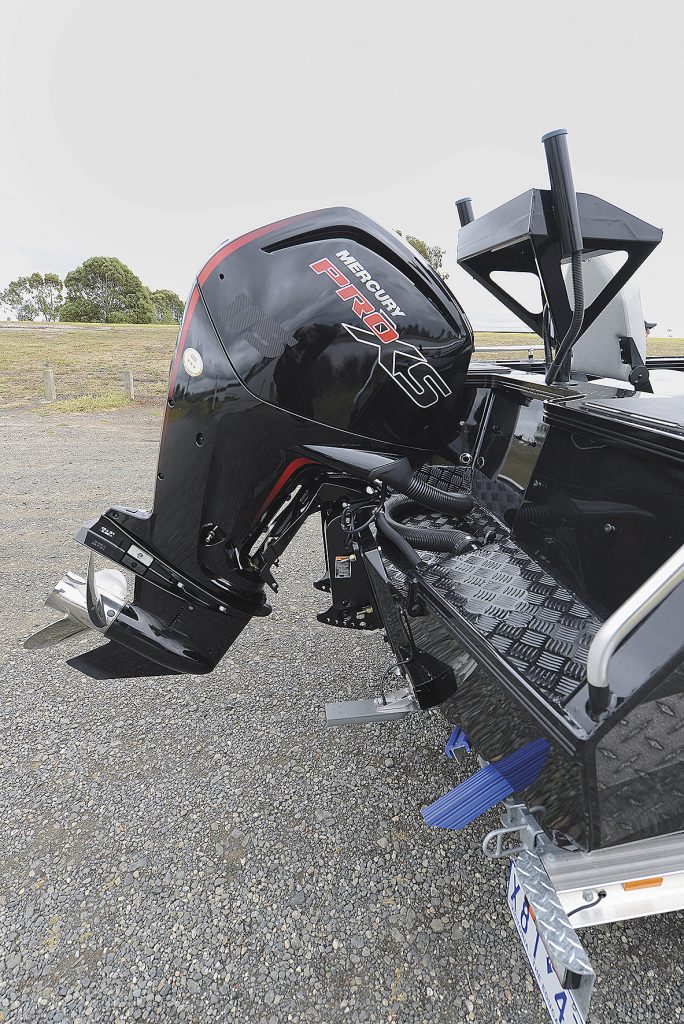 There was no other choice – of course Hodor had to be powered by the superlative Mercury 2.1L 115hp ProXS. It delivers a top-end speed of 72km/h. 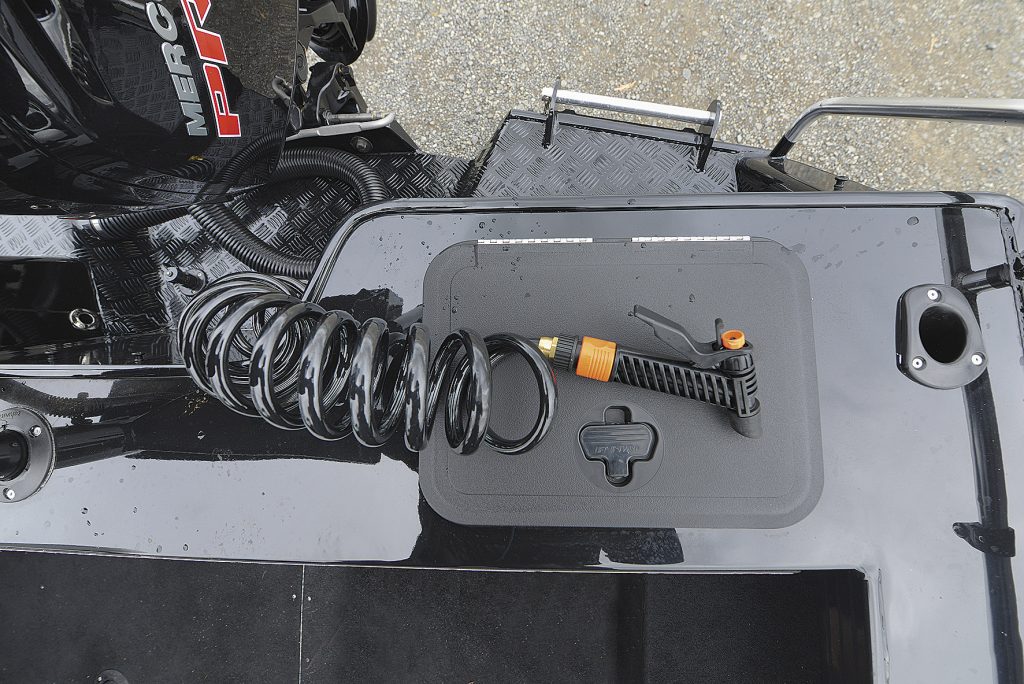 Although a little limited in use with a carpeted floor, there’s a deck wash that lets you keep the bait board in mint condition. 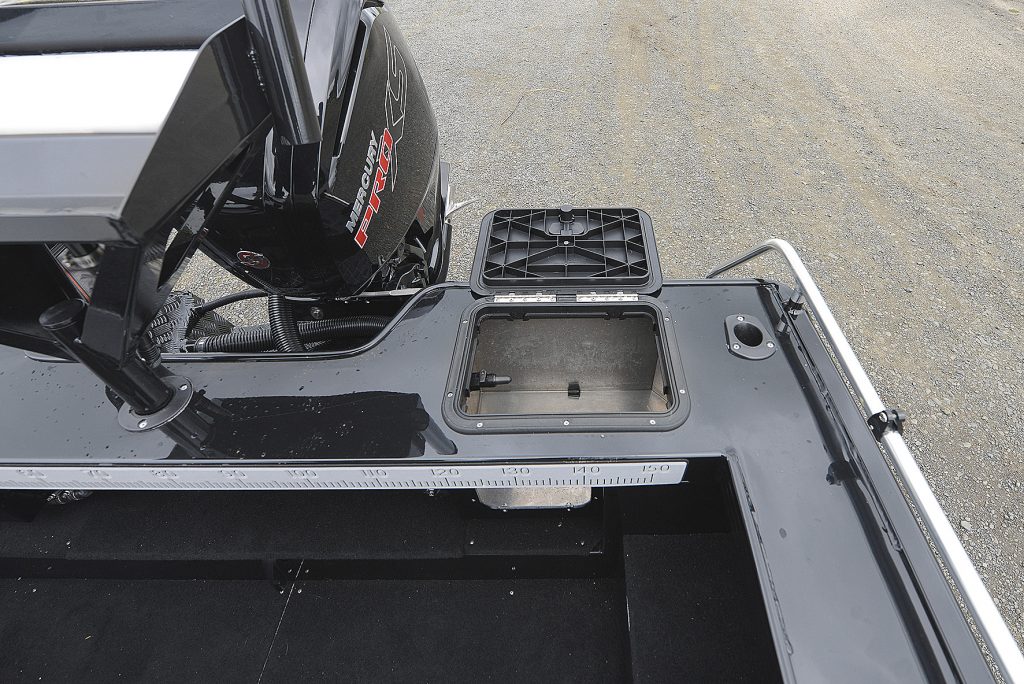 Even the bung and spray nozzle are colour matched! 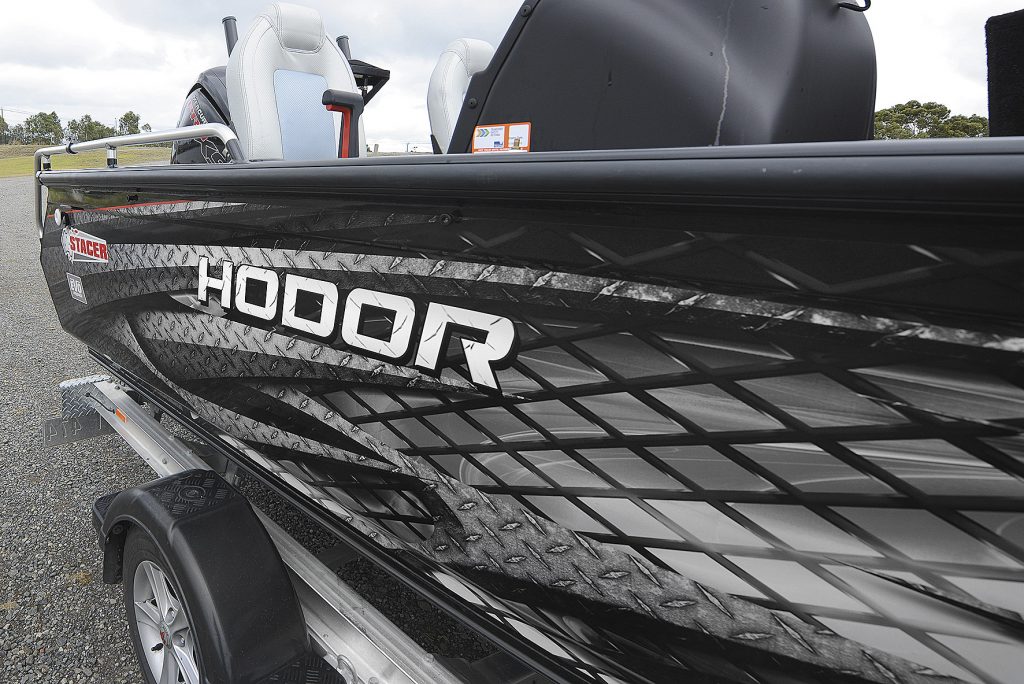 The name was inspired by the burly door-man in Game of Thrones. 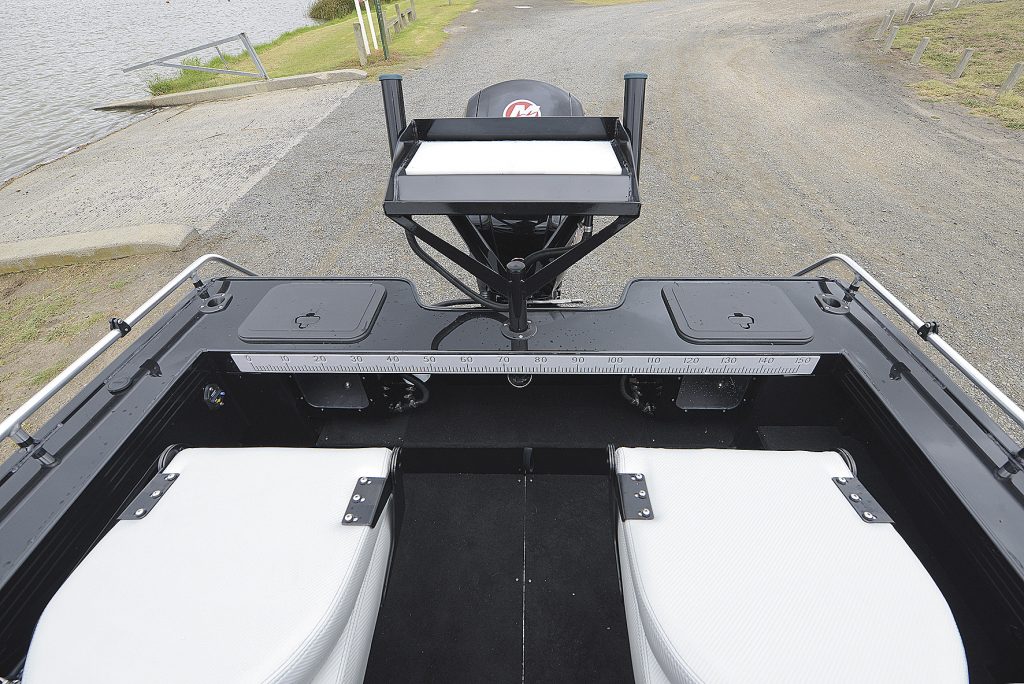 Dual live bait tanks are an aftermarket accessory fitted by MMC. The bait board is colour matched and practical. 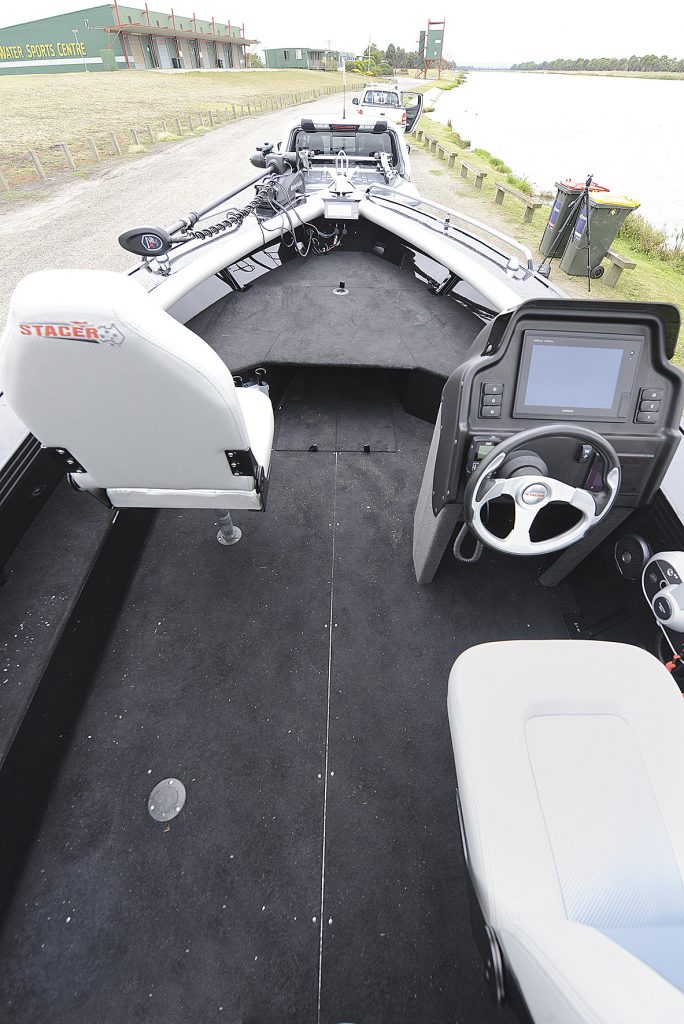 The passenger seat can fit in several base mounts – next to the driver, for’ard in the cockpit or on the casting deck. 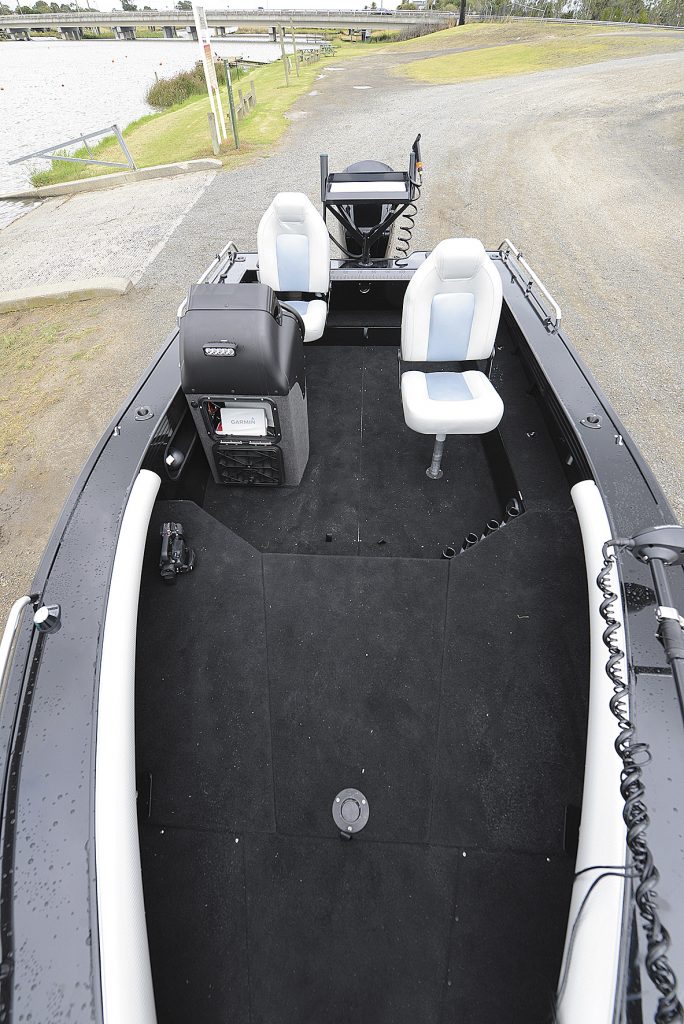 The Crossfire features a drop-in deck segment for the bow rider configuration. You can see the padding around the inside of the front gunwale that protects the back while bowriding. 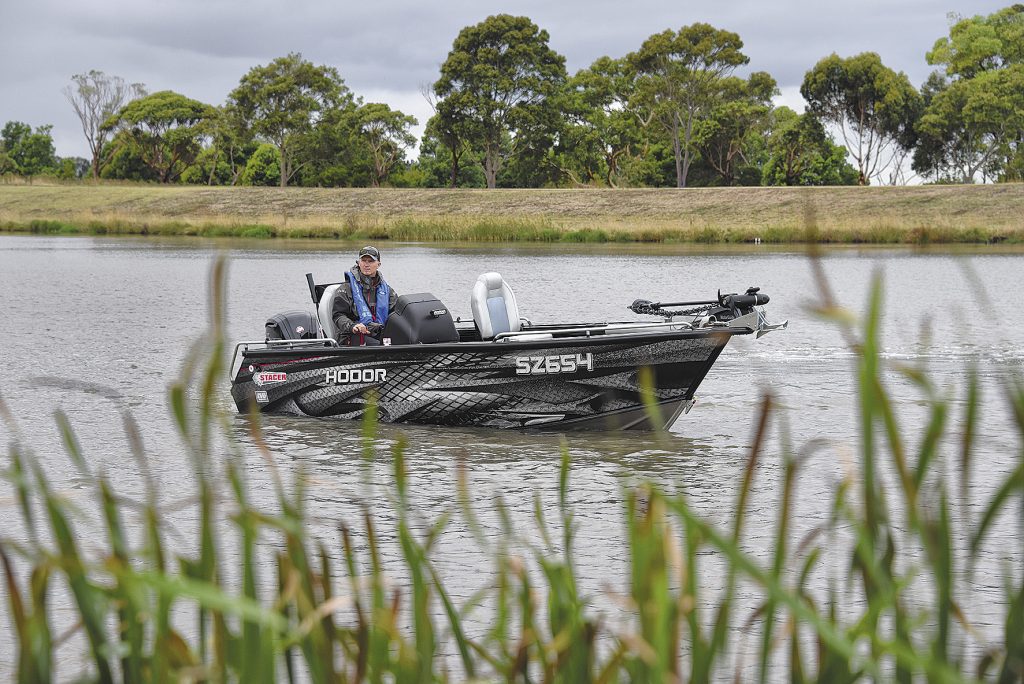 : Gale force winds on Port Phillip Bay confined the testing to the National Watersports Centre on the upper Patterson River. 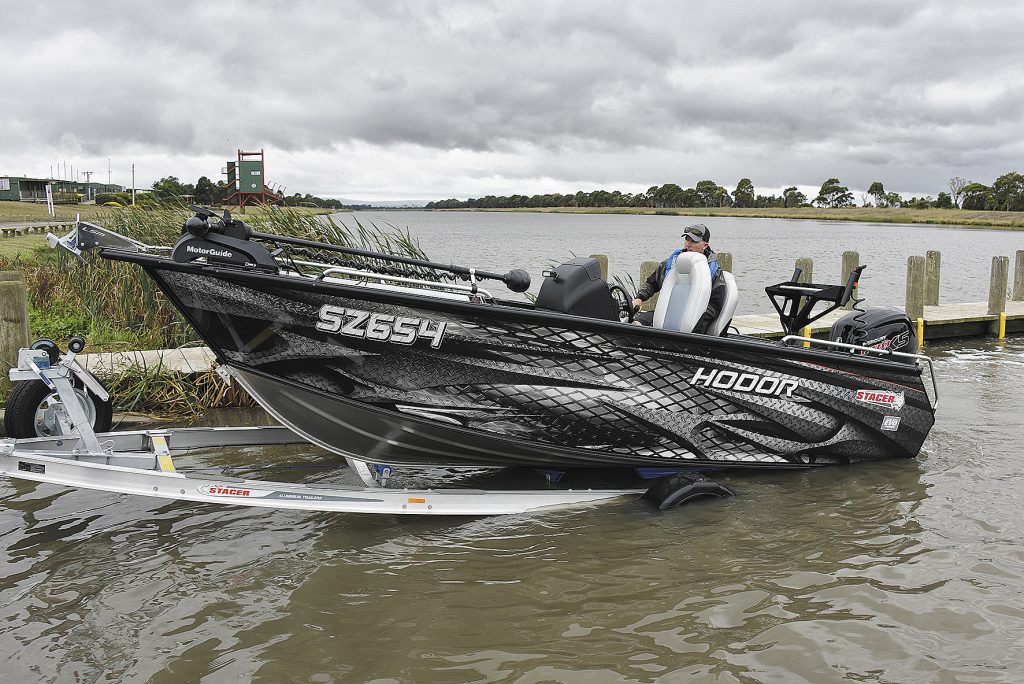 Slide off/drive on. It’s how trailers should be. Hodor is supplied with a Stacer I-beam model with all of the bells and whistles. 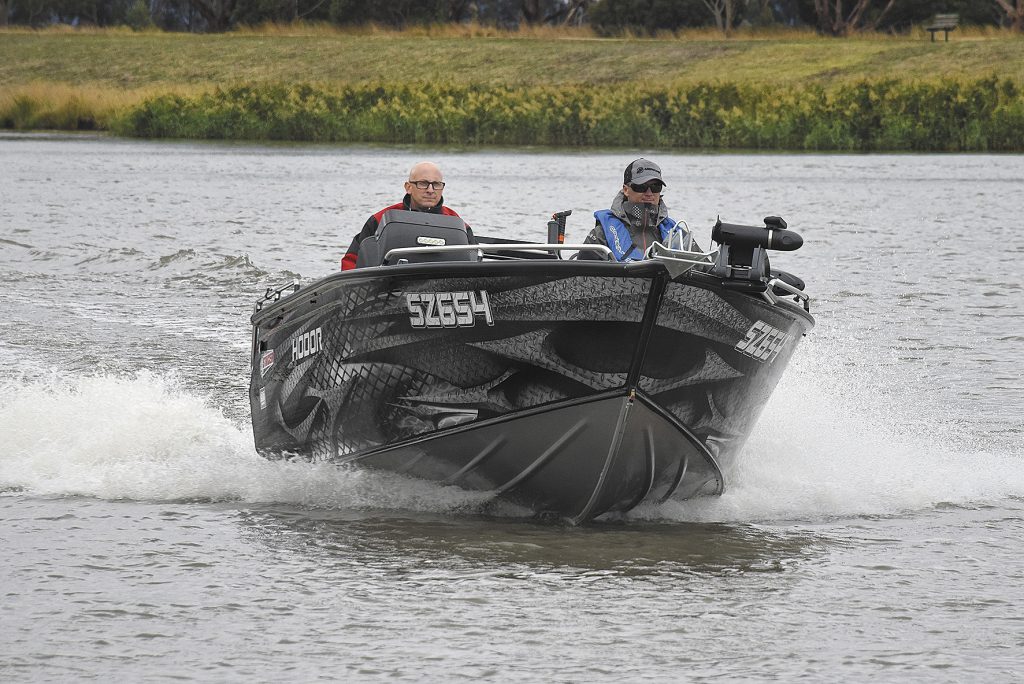 It doesn’t matter what angle you look at it from, this boat turns heads. On the water, at the ramp, at the servo when you’re getting a pie before the boat test. Everywhere.

Drop the anchor with the concealed Lone Star winch – which is cleverly concealed under the front deck – and you can spin around the pedestal seats to lay out some baits for snapper.

The helm-mounted Garmin 7410SV has a full Panoptix transducer to give the angler a full, live view of what’s swimming around under the transom.

And Hodor is just as impressive after dark as it is in the daytime. While at the helm, you have full control of the lighting options, which include under-gunwale light strips and double transom LEDs to attract squid and baitfish while fishing at night.

In the transom itself, there’s a pair of locally fabricated, windowed live bait tanks which are a hallmark of a MMC customisation.

Supplied on a drive-on/drive-off Stacer I-beam trailer, the winch post is fitted with Telwater’s Catch and Release system to allow true, single person operation. We’d expect nothing less from a rig with all of the options boxes ticked.

From a performance angle, Mercury’s Superlative 2.1L 4-stroke ProXS shoots Hodor up onto the plane in less than four seconds. It’s propped to rev hard to 6400rpm while delivering a top speed on 72km/h. The best economy was at 4000rpm, where it delivered a surprisingly generous 2.6km per litre of fuel burned, although it was hard to hold to that speed. This rig just likes to run fast!

It’s the little things that make this boat a pleasure to use. Personally, I loved the modular LED headlights that were mounted to the front of the console. It’s one of the simplest solutions to an age-old problem. I’d be interested to see if there were any problems with reflection from this mounting position when used after dark.

All up, it’s rare that we get to test a customer’s boat that’s as well appointed as this Stacer/Mercury combo. Thanks, Hodor, for letting us take a ride!

For more information about the build, contact Melbourne Marine Centre or visit www.melbournemarine.com.au.

by Peter Jung • It’s always nice to go and test a boat brand that you’ve not seen or heard of before. Your sense of anticipation prior to doing the test in heightened and there […]

by Steve Morgan • If there’s one thing Andrew Stephen and his team from Melbourne Marine Centre are good at, it’s attention to detail. Every time we test a boat from MMC, it’s impeccably presented […]

by Peter Jung •The Anglapro Sniper range consists of seven models, of which the 554 Elite is the largest. They are a deep vee side console design that covers not only the waterways already mentioned, […]