by Steve Morgan •
At Fishing Monthly, we like getting the first look at new ranges of boats. Horizon Plate is a new line-up from Horizon Aluminium Boats, sister brand to Stessl, which is built in the same, growing factory in Coomera, South East Queensland.

The two brands have merged together nicely under the management of Scott James. Incidentally, they also build boats for other brands and plenty of commercial workboats. It’s a busy factory that’s already spreading into their second block of land next door.

Horizon boats have been built for years, specialising in a range of affordable runabouts that have been historically built with pressed aluminium. And you would assume correctly if you thought that Horizon Plate boats were a similar line-up of craft – built with plate aluminium.

“The Horizon Plate boats feature a Grid Core underfloor construction,” said Brand Manager, Mark Johnson, “They have full height bulkheads in both directions under the floor which give an extremely solid build – just what you would expect from a plate boat.” 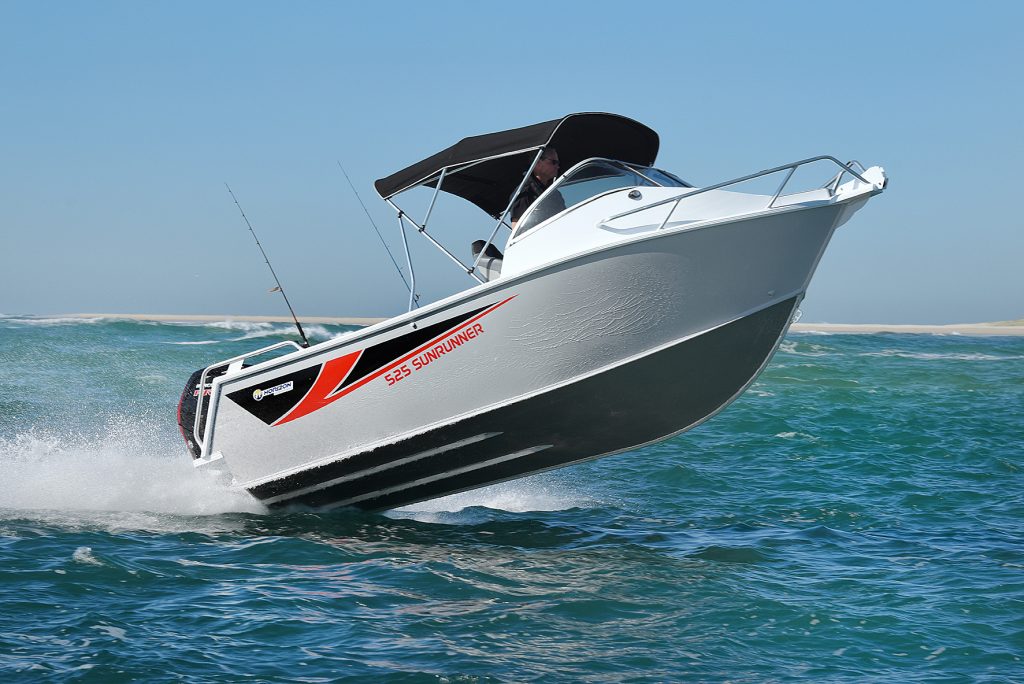 What better way to show you what the bottom of the hull looks like than to go on a run through the Pin bar. 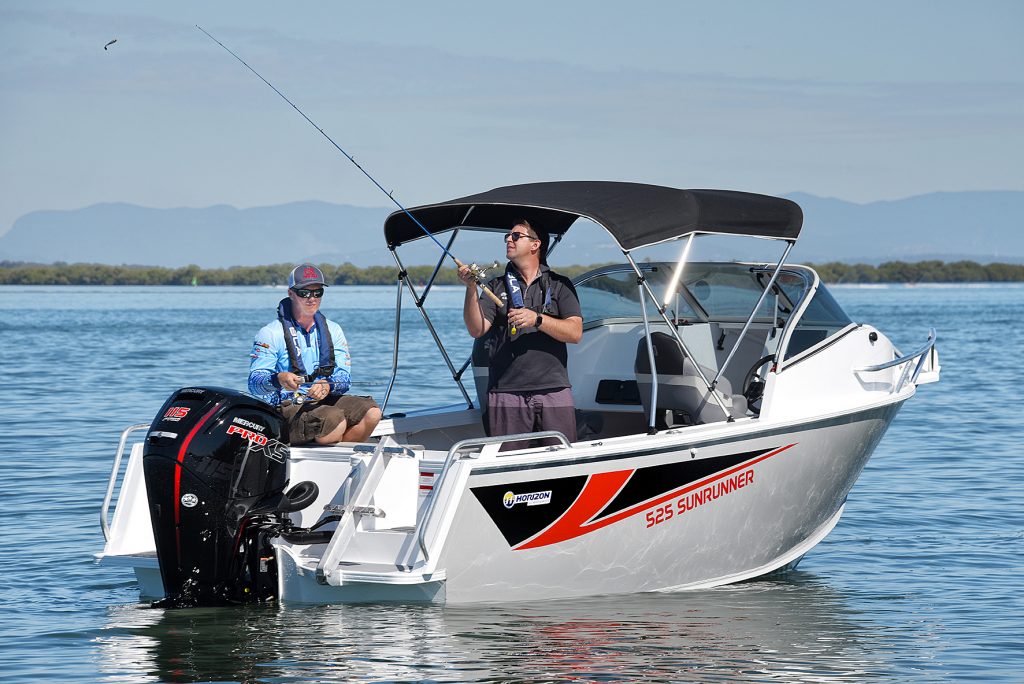 For someone coming up from a basic tinnie, the Horizon runabouts offer shade, comfort and a mountain of deck space to enjoy a day on the water. 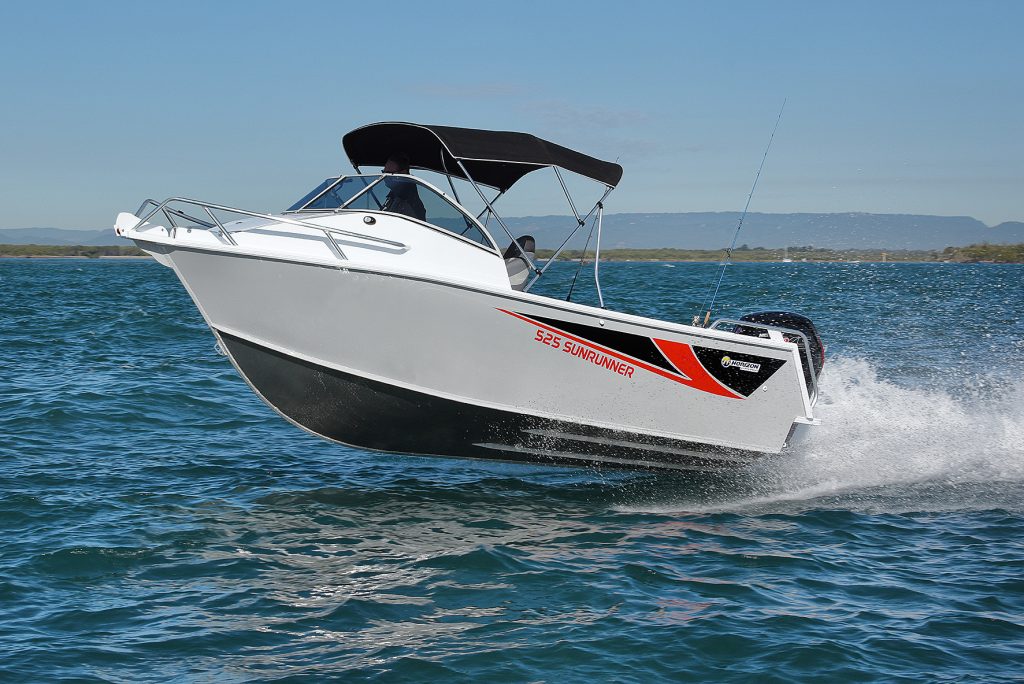 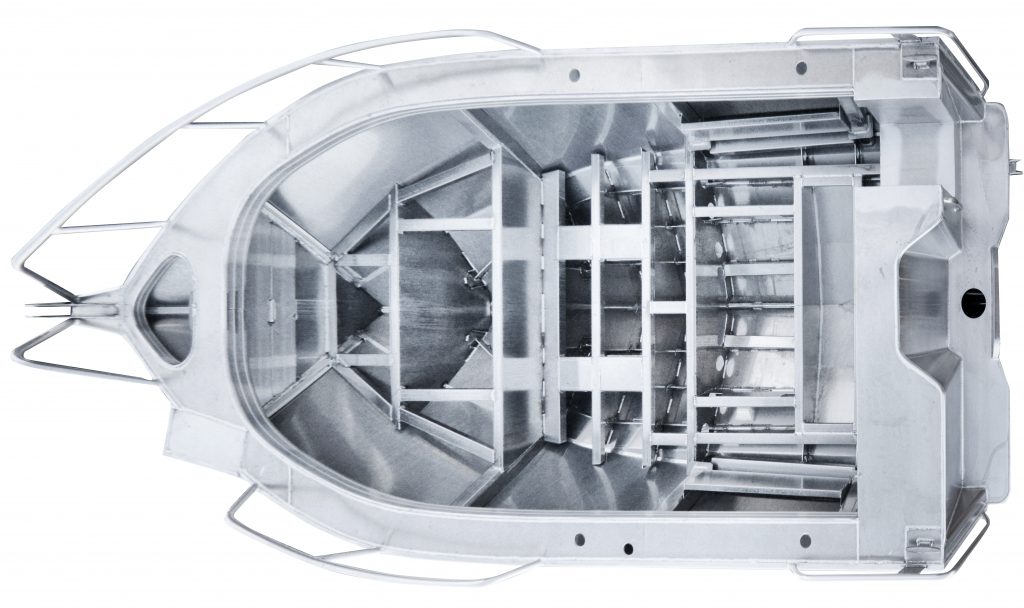 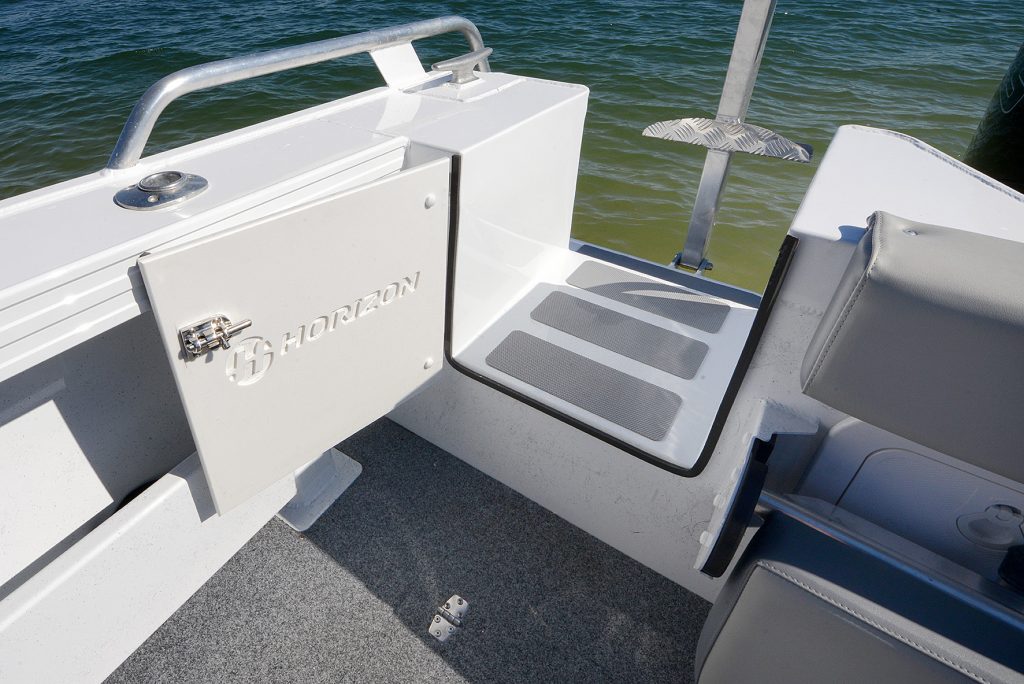 The transom door is a standard feature in all Horizon Plate boats and is a necessity for getting in and out while both on the trailer and on the water. 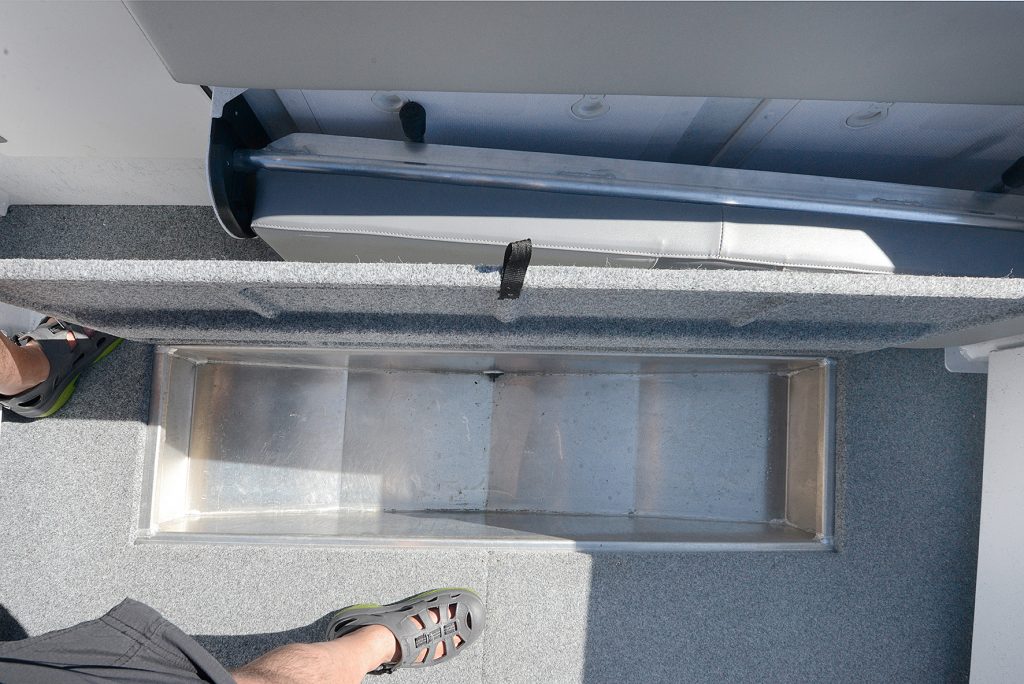 We didn’t expect to have an underfloor fish box, but there’s one back near the transom. 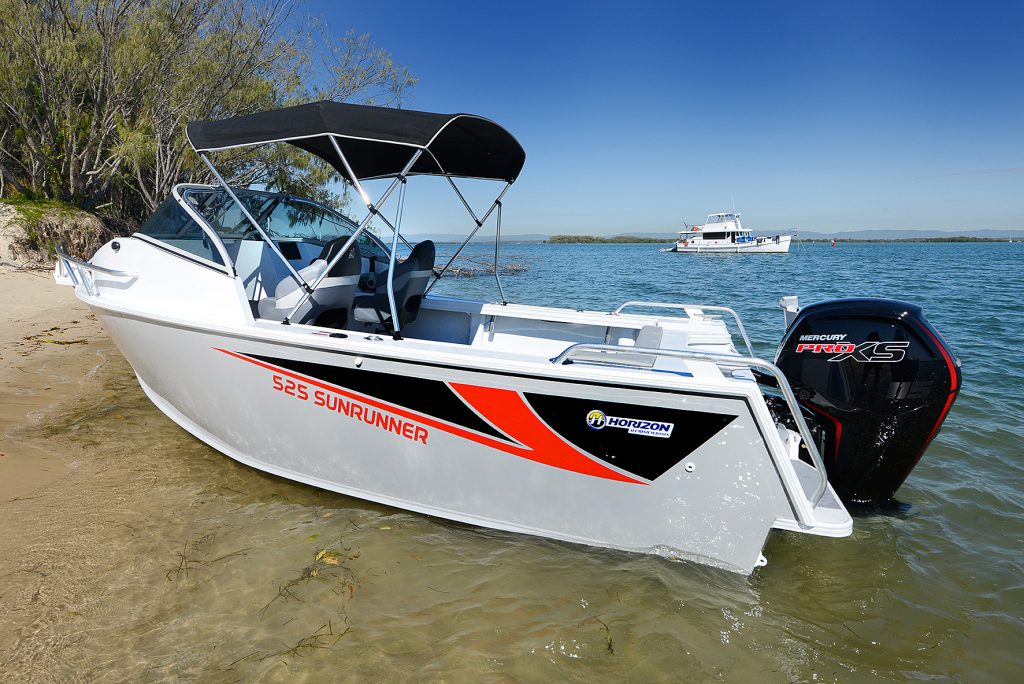 There’s no denying that the new Horizon Plate boats look the part. This one has graphics matching the Mercury 115 Pro-XS 4-stroke. 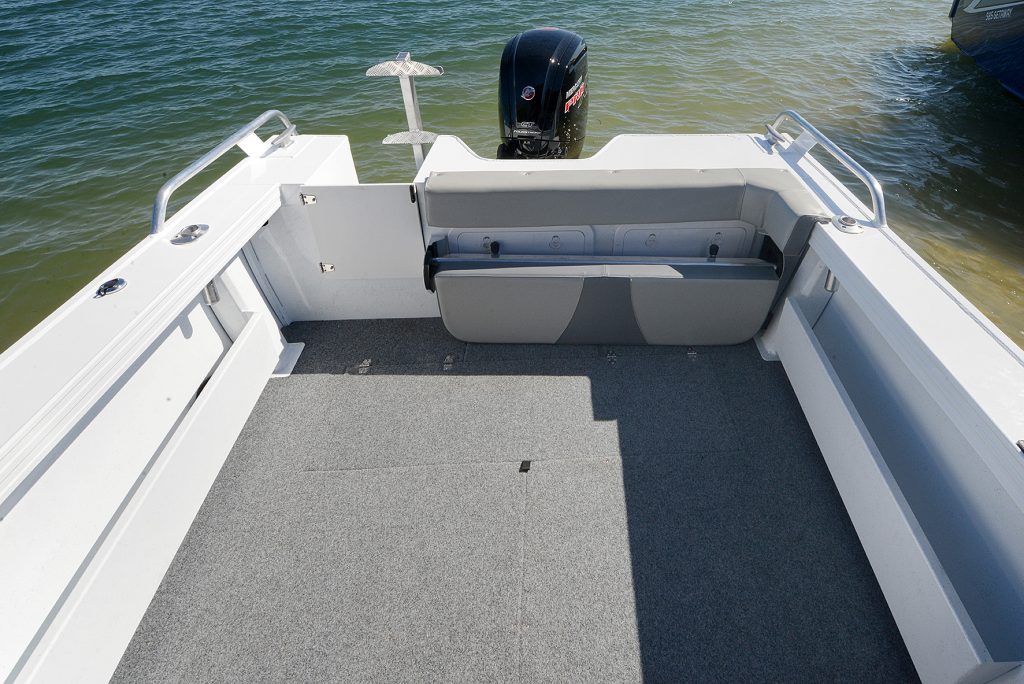 The small, fold-away lounge seat can seat an additional two people while underway. When folded away, there’s a mountain of room back there. 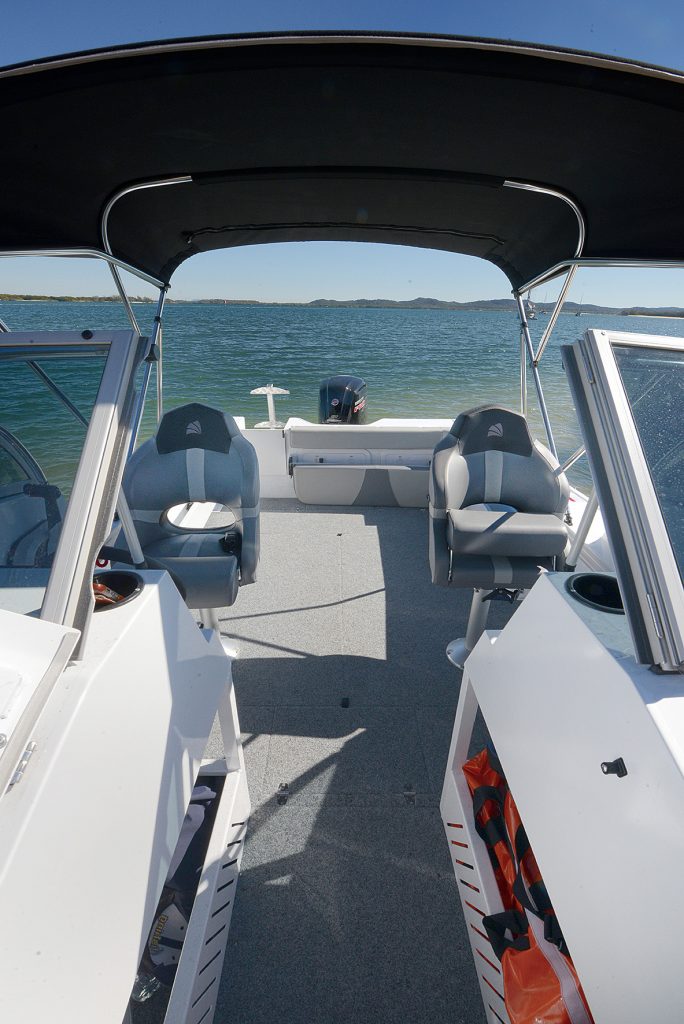 Looking back from the bow, you can see the massive amount of cockpit space in this rig. This is a 5.25 metre boat! 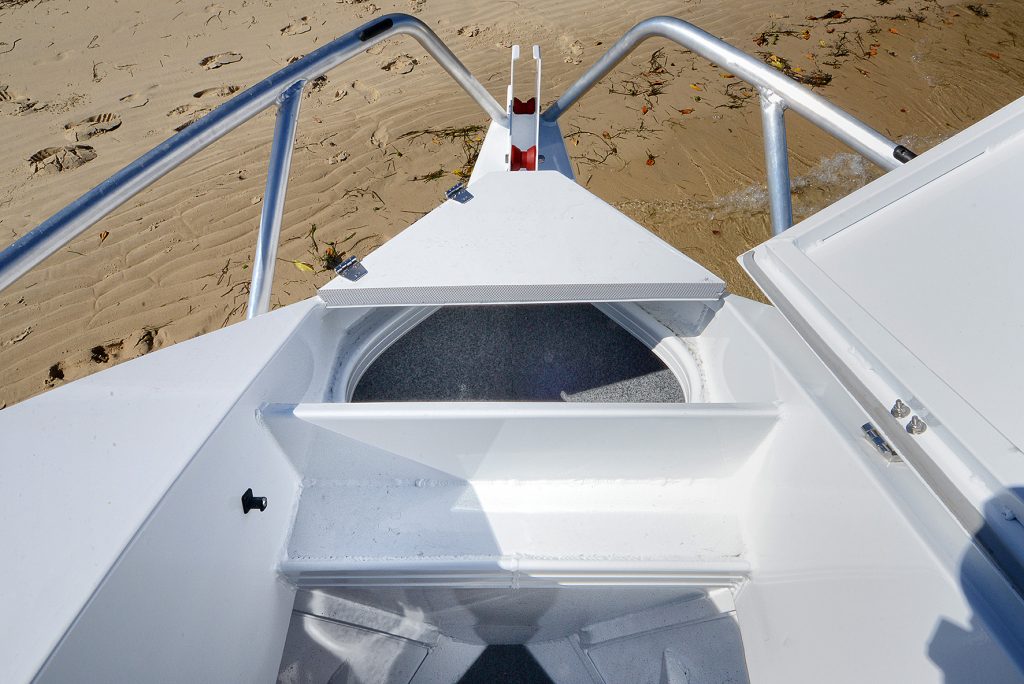 From the inside, here’s the access to the anchor well. The front flap folds away as well to let you anchor with ease. 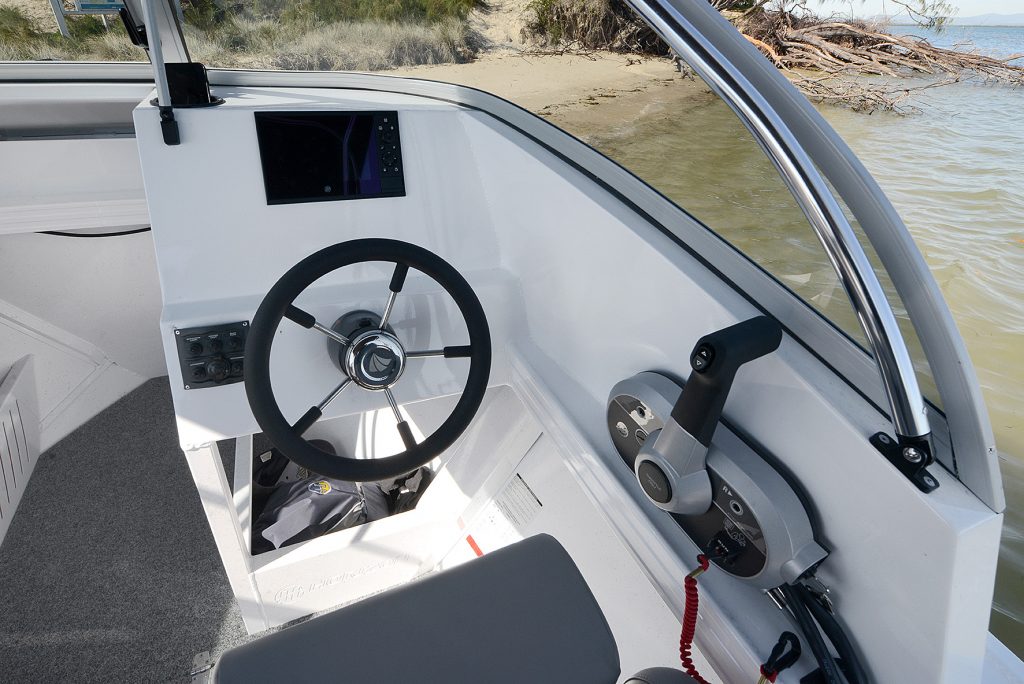 The helm is simple and can hold large electronics flush-mounted. It would have been nice for somewhere to rest your arm while adjusting the throttle. 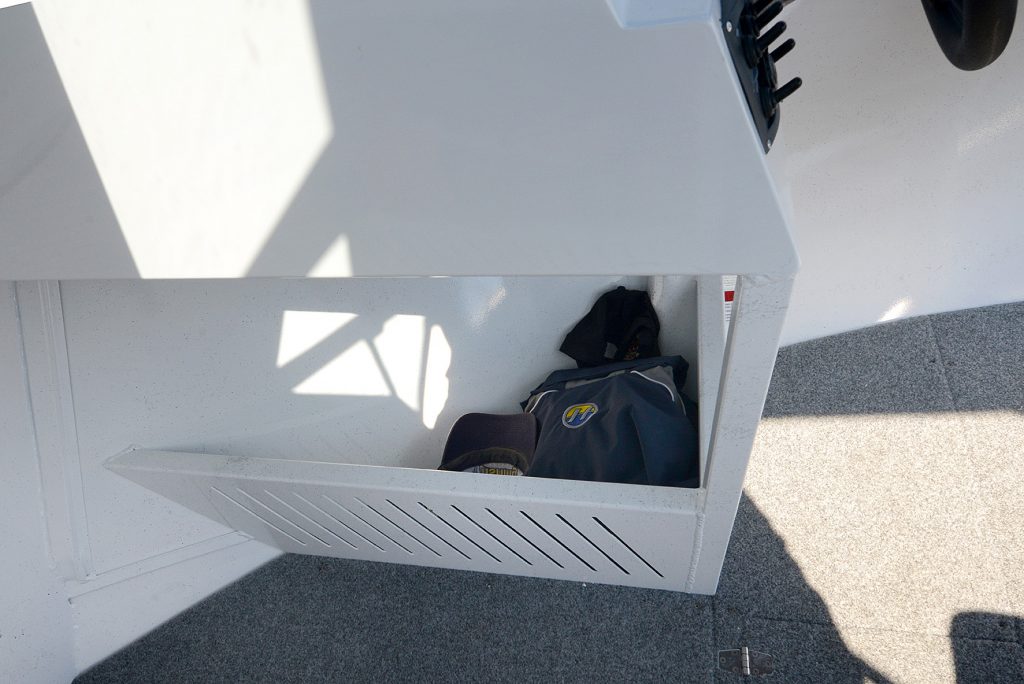 A small area up for’ard holds your gear in place. 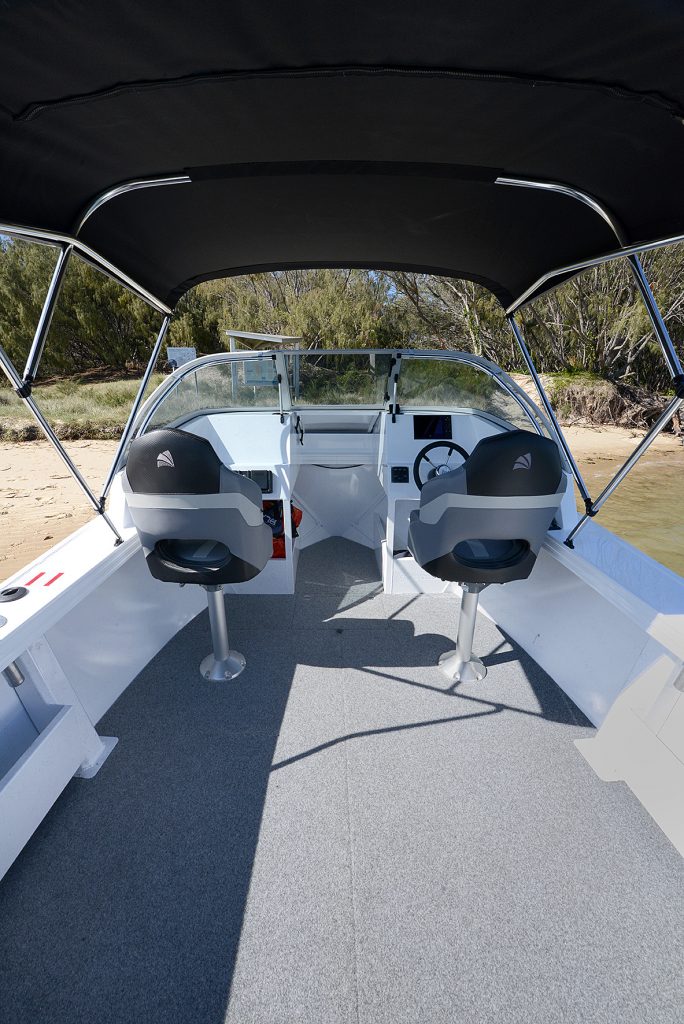 The internal layout of the Sunrunner is pretty simple - a couple of seats, some bars to hold back your gear and a pathway up to the anchor. The rest is cockpit space. 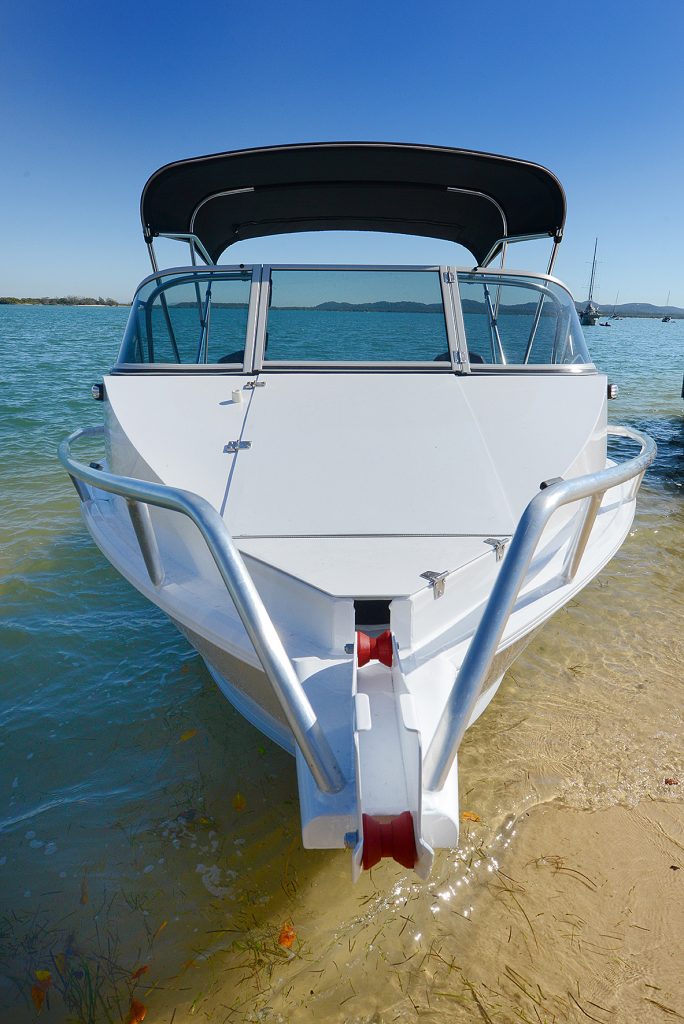 There have been plenty of solutions to the “how do we build a pathway to the bow” issue for runabouts over the years. This solution is pretty neat. 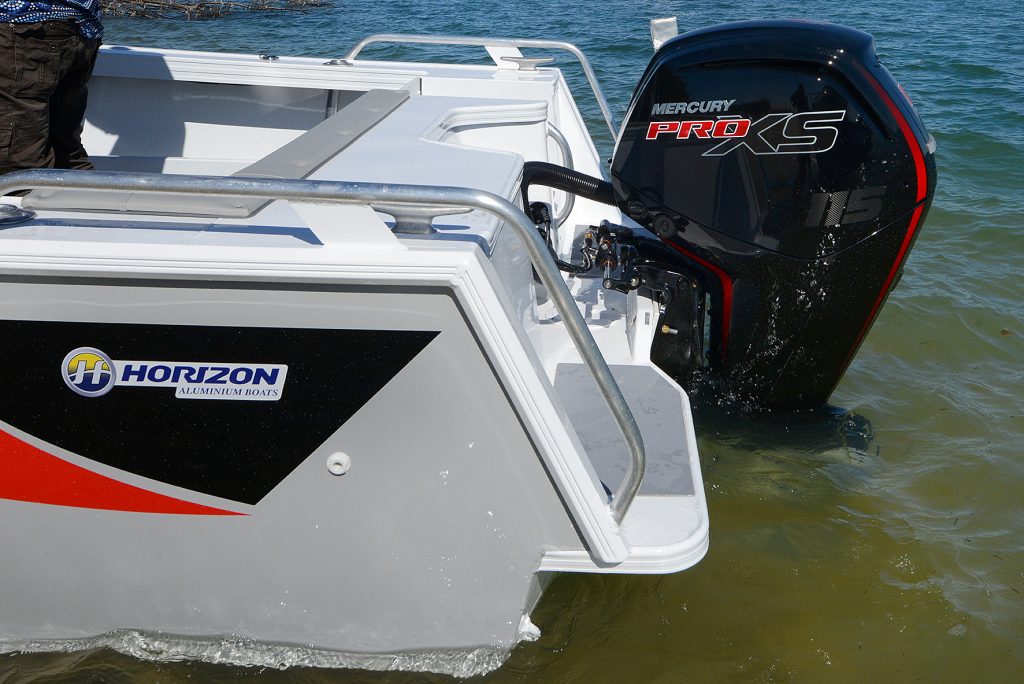 There’s broad duckboards either side of the outboard that give the kids somewhere to climb on when the boat isn’t running. 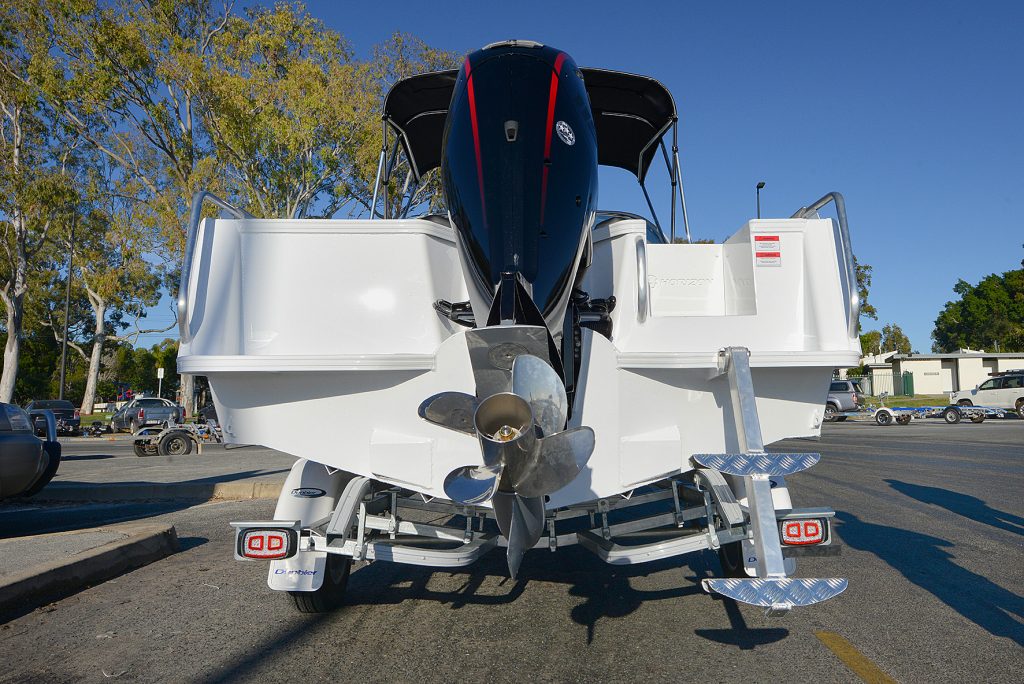 With a broad beam, the hull sits above the guards when it’s loaded on the single axle trailer. This means that a solid boarding ladder and transom door are important. Both are standard features.

And if you think that the upgrade costs an arm and a leg, you’d be pleasantly surprised. Depending on the model, it’s a ‘couple of grand’ and you can find out exactly the difference at your local Horizon dealer.

The 525 tested is a true, basic runabout configuration. There’s easy access to the anchor well up front, a couple of comfortable helm seats, some simple dividers to keep your gear stashed under the front and then a mountain of cockpit space from there back.

The way the anchor well access has been built is a great treatment of the access to the bow.

There is a small, two-person foldable lounge along the transom, but this easily stows when not underway to maximise fishing room.

Also on the transom is a (standard) transom door that leads out to the boarding ladder. Both on the water and on the trailer these features are a must. Because the hull sits over the top of the wheel guards, you’ll need to climb in and out of the boat through here.

Powered by a 115hp, 2.1L Mercury Pro-XS 4-stroke outboard, this was always going to be a responsive package. Top speed was 66km/h at wide open throttle, where it reached 6,300rpm and yielded 1.5km/L. Drop the stick back to 3,500rpm and economy jumped to 2.4km/L while cruising at 32km/h.

Remember that if you haven’t driven runabouts before, they can be a little weight-sensitive while underway. Understandably it didn’t like all three of us on the starboard side while trying to film running shots while underway. Move a person to port, however, and the problem is solved.

There’s a neat bimini top that sits over the helm and this is essential no matter what part of Australia you are from. You can fold it down to squeeze into certain garage situations, however, I’d suggest that this boat wouldn’t fit into a standard suburban garage.

Overall, the ride of this boat feels solid. You can see the rig in action on the video boat test that’s available by scanning the QR code on the main pic of this article or be searching for the test on the Fishing Monthly Magazines YouTube channel.

There are around 30 Horizon Boats dealers nationwide. They can help you get a quote for YOUR ultimate Horizon Plate rig. As tested, this rig came in at $49,990.

by Peter Jung • It’s always nice to go and test a boat brand that you’ve not seen or heard of before. Your sense of anticipation prior to doing the test in heightened and there […]

• by Wayne Kampe If there’s a better place in South East Queensland to review a boat than the Southport Broadwater, I’m yet to find it. The launching is easy thanks to several sheltered ramps, […]

by Steve Morgan • Melbourne Marine Centre loves pimping up Stacer hulls. We tested one a while back when Andrew Stephen and the guys optioned up a Nomad to within an inch of its life. […]