Snapper are as good an eating fish as you will find in Moreton Bay and, depending on what gear you’re using, they are a great fighting fish as well.

Those of you who read my weekly fishing reports would know that I love catching squire (juvenile snapper) in the bay. I get a lot of questions from readers asking for advice, so I decided to write an article to help all the local snapper hopefuls out there. Follow these tips and you should be on the path to success!

I started catching snapper in the 1960s with my dad, fishing in the very fast running tides in the entrance to Port Philip Bay in Victoria. We used lead the size of a small Coke bottle and a 30-40ft trace, with smashed up blobs of squid for bait, or alternatively fresh barracouta (with the bones broken) or salted pilchards. During snapper season there were plenty of big fish around 20lb, although my dad loved eating the smaller 20-30cm ‘pinky snapper’, which we Queenslanders call ‘squire’. The author with a quality summer snapper. 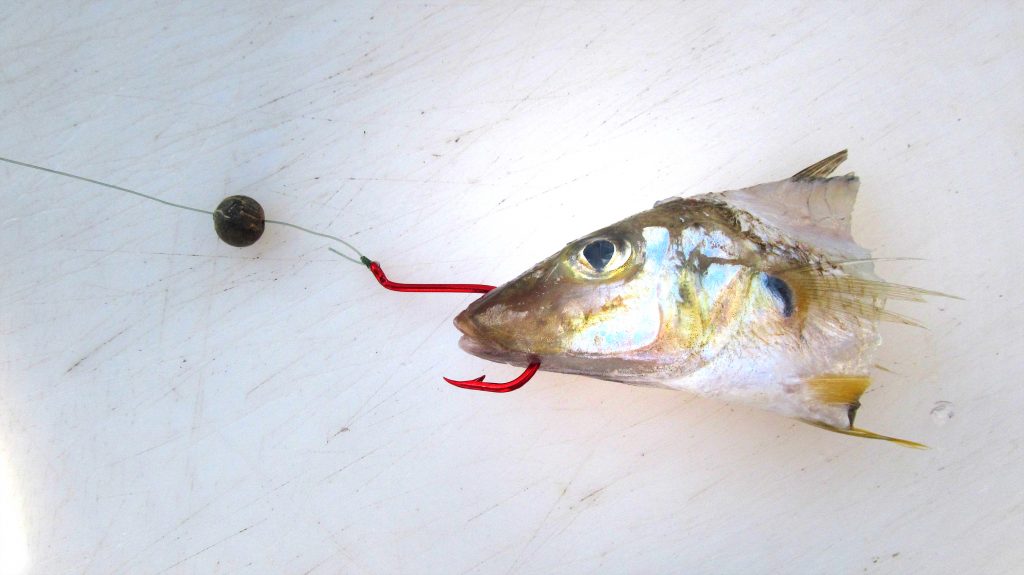 The perfect bait: a whiting head rigged with a running sinker down to the hook, or above a swivel on a 2ft trace. 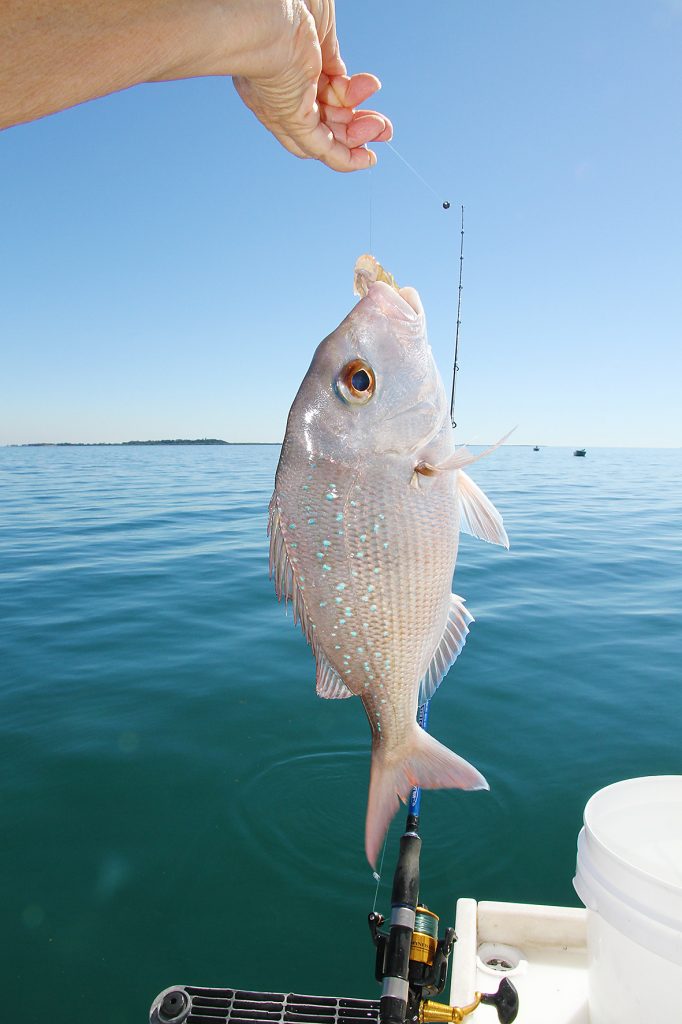 It's great to be able to enjoy good squire fishing so close to home. 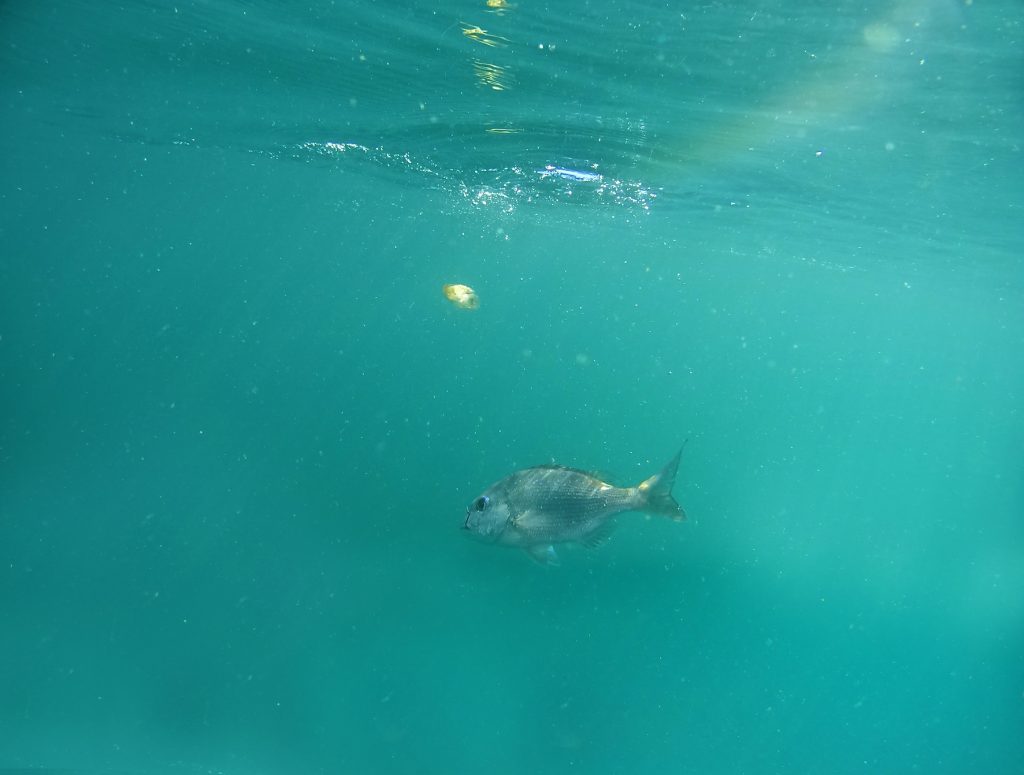 This fish took a whiting head that had withstood repeated attacks from pickers. 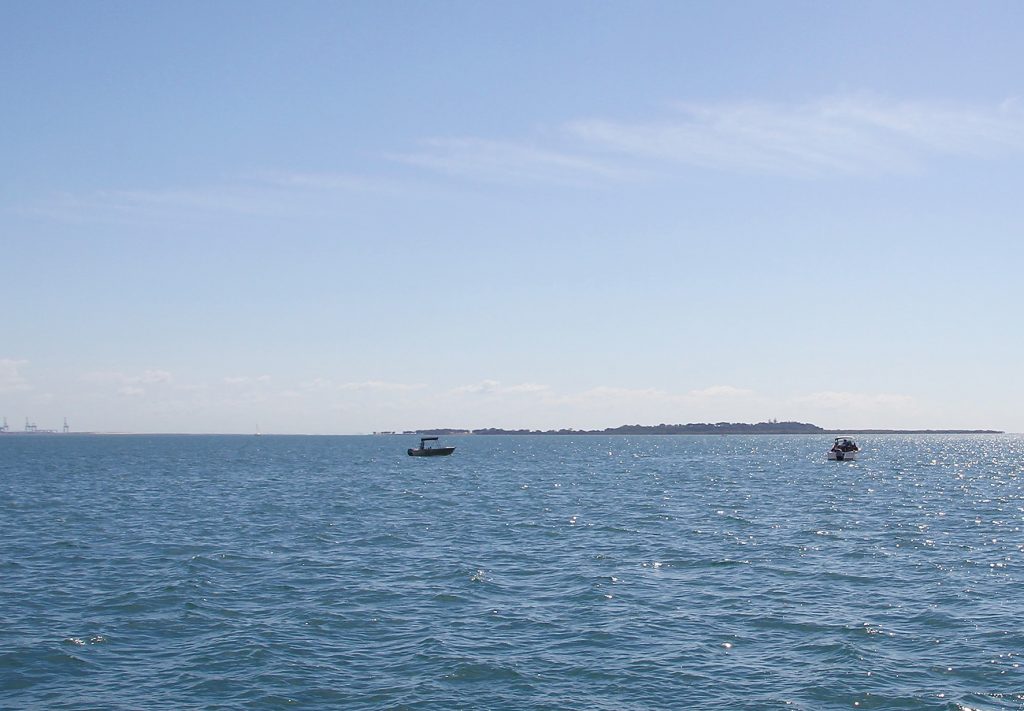 Some anglers head home when the sun gets high, but the smart ones know that it’s the tide that matters, not the time. 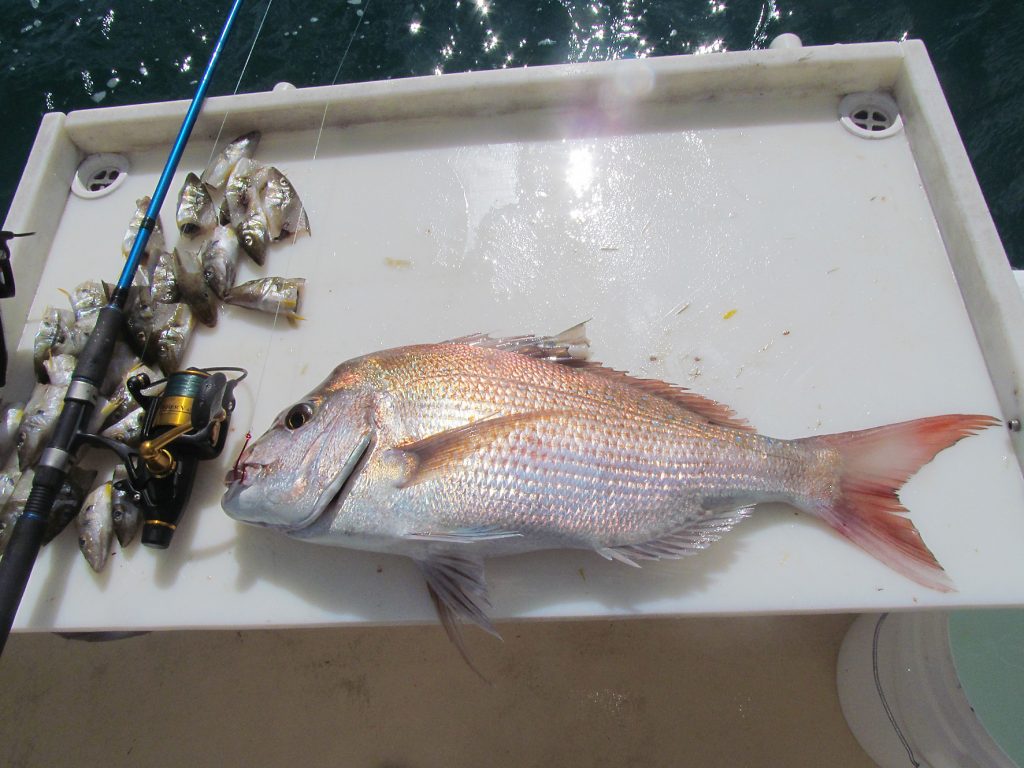 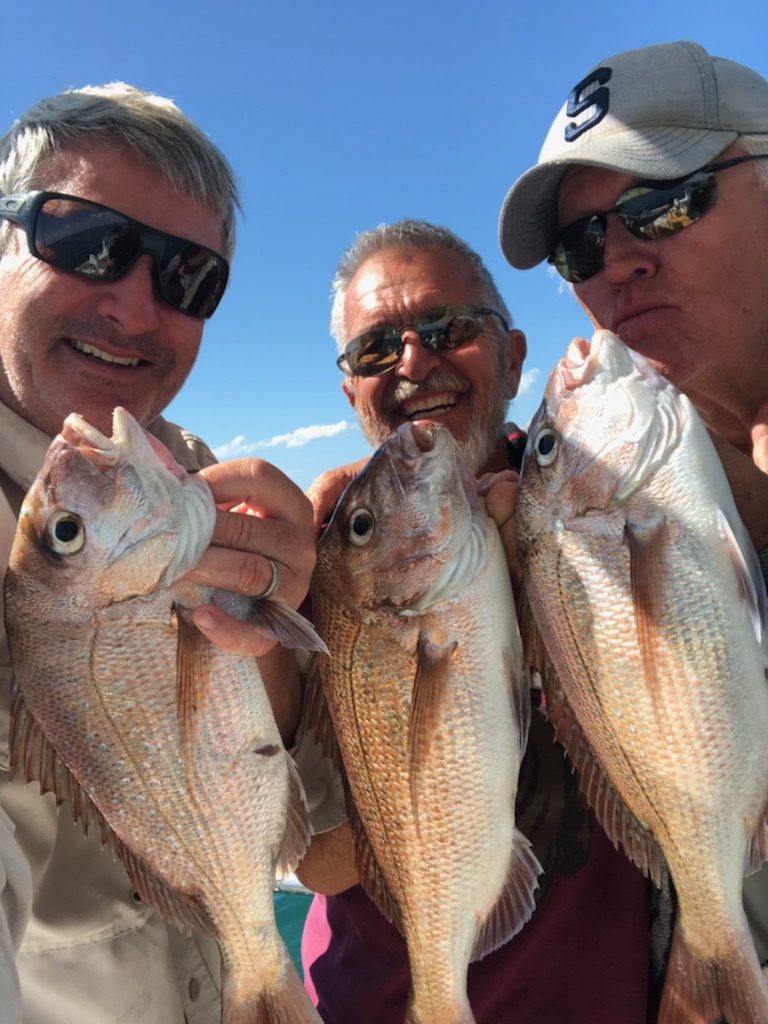 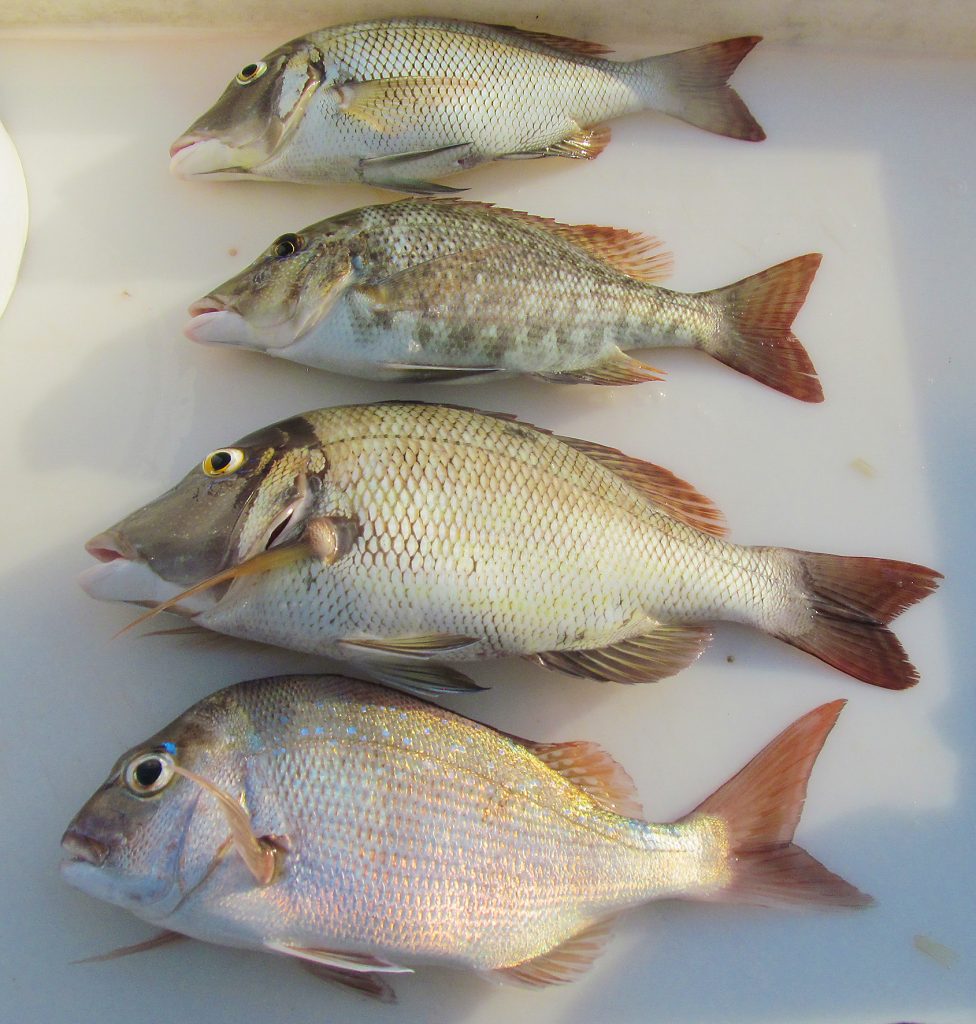 When targeting snapper you can get a welcome bycatch of sweetlip.

The author and his godson in the early days at Peel Island. Catches nowadays aren’t as good as they were then, but you can still catch a feed when you know how.

When I moved to Brisbane 42 years ago, I discovered that it wasn’t the same as fishing for them in Victoria – especially the type of baits and rigs to use. I remember sitting at the Harry Atkinson Artificial Reef for months on end when there were only a handful of boats, even on weekends, and I caught hardly anything – just a small fish every blue moon. And yet, a lovely old fisherman would turn up, anchor 50ft from me and within an hour (depending on the tide) he would have two or three huge snapper in the boat. All I could do was sit and stare, wishing I knew what he was doing.

After a while he must have felt sorry for me, because one day, after catching his snapper, he came over and said, “I see you’re not getting very many.” He proceeded to let me know how and when to target them, and what was and wasn’t the best bait for snapper in the bay.

On my next trip I went back to the same spot on a grey and drizzly summers day, with a bucket of whiting for bait, and I caught 11 snapper in an afternoon session. Four or five of them were over the 15lb mark, and I couldn’t believe what I was seeing! Everything changed from that day on.

Some 40 years later, we obviously don’t have the numbers that we did then. However, it’s not all that hard to catch a keeper if you put the time and effort in, and the weather and tides are on your side. Moreton Bay has plenty of fish for all, and snapper are one of the best eating fish there is. You can also pick up a tasty bycatch of grassy sweetlip while you’re at it.

Whiting is my first choice of bait. Live whiting are best, but whole dead ones are excellent too. Even just the whiting heads are good baits, with a hook through the nose and the frame cut up for berley.

Over the years I have found other baits that are extremely good are garfish, pike, razor pillies, small horse mackerel, cuttlefish, small octopus and whole squid. If you’re running low you can also try grinner fillets, if you can put up with the stink.

In the past I have also used mullet strips and pillies, but I’ve found that the small picker fish rapidly demolish soft baits, so most of the time you are sitting there with an empty hook, waiting in vain for a fish to bite. Yes, there’s a chance you may catch a big fish on a pilly, but for me whiting is the safest bet. This tough bait will resist the pickers for a long time, giving bigger fish a chance to home in on it.

Another thing I strongly recommend is to always berley when you’re fishing for snapper. I can’t believe the number of times I’ve found heaps of my berley in their stomachs. You can berley with just about anything, including mashed up fish frames, old bait, prawn shells, cat food, livestock pellets with added tuna oil, or just pre-made berley from a tackle shop. However, my preference is to simply berley with whatever you are using for bait.

You should deploy small pieces of berley (no larger than 2cm) and keep a steady stream going. Add a bit more every 3-5 minutes. People worry about overfeeding the snapper, but with the amount they can hold in their stomachs, and the sheer number of small fish around, I don’t think you can overfeed your quarry. Berleying does attract unwanted species like gummy sharks, stingrays and such, but I don’t really mind because that just means the berley is working!

When fishing for squire, I find baitrunner-style reels to be by far the best. As well as the original Shimano Baitrunner, I use similar style reels from Penn and Daiwa in 450 and 550 sizes.

The rods I prefer are around 7ft with a fairly solid body and a lighter tip, rated to around 8-20lb. My favourites are Wilson Blue Steel and Penn Regiment rods.

The hooks I use are Mustad Big Red suicide hooks in 4/0, 5/0 and 6/0 sizes. Using larger hooks minimises unwanted by-catch. If you use smaller hooks you’ll catch all the little fish like bream, Moses perch, baby snapper and sweetlip, and of course, those spiky happy moments.

When it comes to the rig, I have traded in my old Victorian deep sea paternoster rig for a running sinker in the shallow reefs around the islands in Moreton Bay. However, I have kept the long traces (up to 30ft) with a running sinker where the tides are strong in the deeper waters, like the artificial reefs and Cowan reefs. Everywhere else I use a 2ft trace on a small ball sinker, or the small sinker on the hook. You should use just enough lead to get you on or close to the bottom, which of course is dependent on how fast the tide run is. I love fishing with no sinker when possible.

When you are considering where and when to fish, remember that it all comes down to the winds and tides. I prefer the outgoing tides in the shallow grounds of Green, St Helena, Mud and Peel islands, especially with the wind in the same direction. I find afternoon tides to be the best, but I have also caught many fish in the middle of the day. Cloudy days are best.

My two favourite spots for squire are the eastern side of Green Island in about 16-20ft of water, and the Lazaret Gutter at Peel Island, only a couple of hundred feet into the gutter. The place to target these fish in the bay is not on the top of the shallow grounds, but on the drop-offs, as that’s where the fish will end up as the tide recedes. This is the reason I like the outgoing tide the best. I have found that as the tide grows the fish move up to the shallows to feed, and trying to fish there in between the coral and rocks is just too hard with bait. If you hook up to a good fish there, you’ll usually get broken off.

So what time of year is best? I have caught snapper all year round, both big and small, but in the cooler months the catches do improve quite a bit. Even so, I prefer fishing for them in the warmth of summer!

The size of snapper in Moreton Bay varies a lot. On some days every fish you catch will be squire-size, around the 25-30cm mark, while on other days the fish are 35cm+. The bigger fish seem to be more solitary than the smaller ones. You’ll usually catch only one larger snapper; you’d be lucky to get two.

The fight put up by these fish is quite distinctive. They have a great first run and then a steady fight with plenty of head shakes. Just remember that the fight is never over until that snapper is netted and in the boat, so don’t be too quick to assume you’re home and hosed – especially when you’re hooked up to a good one.

There are many ways to cook these fish. You can bake them whole (the cheeks are delicious), or fry or grill the fillets. I love frying snapper fillets in tempura batter. You can also boil the head and body to make the best fish stock ever!

I hope this article helps you to get a Moreton Bay snapper on the table. Good fishing!

Winter whiting in the bay

by Spero Kartanos • The humble little whiting is the very first fish that most of us catch. You can spend untold amounts of money on the latest rods and reels to catch big fish, […]

by Spero Kartanos • Any Fishing Monthly readers who read my weekly Moreton Bay reports, would know I’m definitely an old school fisherman. A lot of us old schoolers find it hard to change the […]

by Paul Lennon • On the mid-north coast of NSW live baiting the inshore reefs, islands and headlands is an extremely good way to get connected to some serious fish. Kings, black marlin, longtail tuna, […]