A few years ago, if someone asked if you had heard of the Fitzroy River, you would be forgiven for assuming that they were talking about the river located up in the northern region of Australia. Up until a few years ago the Fitzroy River in Rockhampton was somewhat of a hidden gem for barra anglers. However, in recent times the implementation of Net Free Zones in Queensland (including the Fitzroy River) has really highlighted the venue as a viable place for travelling anglers to come and get their barra fix.

Previously high-profile venues – like the Northern Territory or the dams around the Mackay, Bundaberg and Gladstone areas – have attracted the attention of southern Queensland and NSW anglers making the trip north to target barramundi. The floods that caused Awoonga, Monduran and Lenthalls dams to overflow shut these dams out of the equation and caused them to lose favour with many of these travelling anglers. The introduction of Net Free Zones had social media sites quickly turning the spotlight on the Fitzroy River.

The river itself is located in Central Queensland. Its catchment covers an area of 142,665km2, making it the largest river catchment flowing to the eastern coast of Australia. It is a massive system stretching a length of 480km. It links into another system in its lower reaches, which itself links up to the waterways adjacent to the town of Gladstone. In essence, you could launch your boat in the town reaches of Rockhampton and, picking your tides, could then travel via water all the way to the town reaches of Gladstone. The enormity of the Fitzroy River and its associated systems can be quite daunting to the travelling angler and local knowledge is a huge help for those wanting to navigate the system safely.

The Fitzroy and Port Alma systems are about as close as you can get to a Northern Territory barra fishery. Mile upon mile of mangrove-lined mud banks can give the impression that you are in a remote and isolated creek, when in fact you are only a short distance from the town reaches of Rockhampton or Gladstone.

There is a closed season for barramundi on the east coast of Queensland. This closed season runs from midday on 1 November and ends on midday on 1 February. It offers the barra some respite from local fishing, however, the closed season also coincides with the regions wet season and its opening date can quite often occur in conjunction with the flooding of the river.

The large catchment in the upper reaches of the river can mean that inland rain could cause the river in the Rockhampton town reaches to flood for up to two weeks after the rain falls. The barra open on 1 February is one of the most anticipated dates on the Central Queensland calendar. Fishers like myself who have major issues regarding barra (or the lack of being able to catch barra during the closed season) are again let loose on the system and can finally scratch the barra itch. 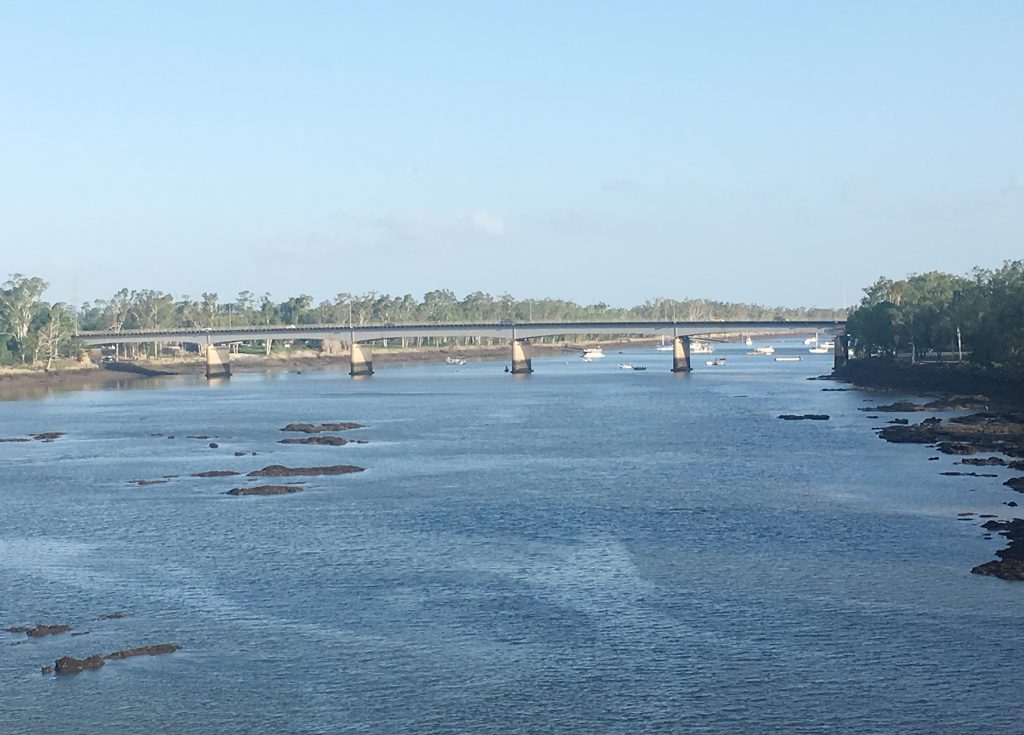 The rocks exposed in the town reaches of the Fitzroy River. 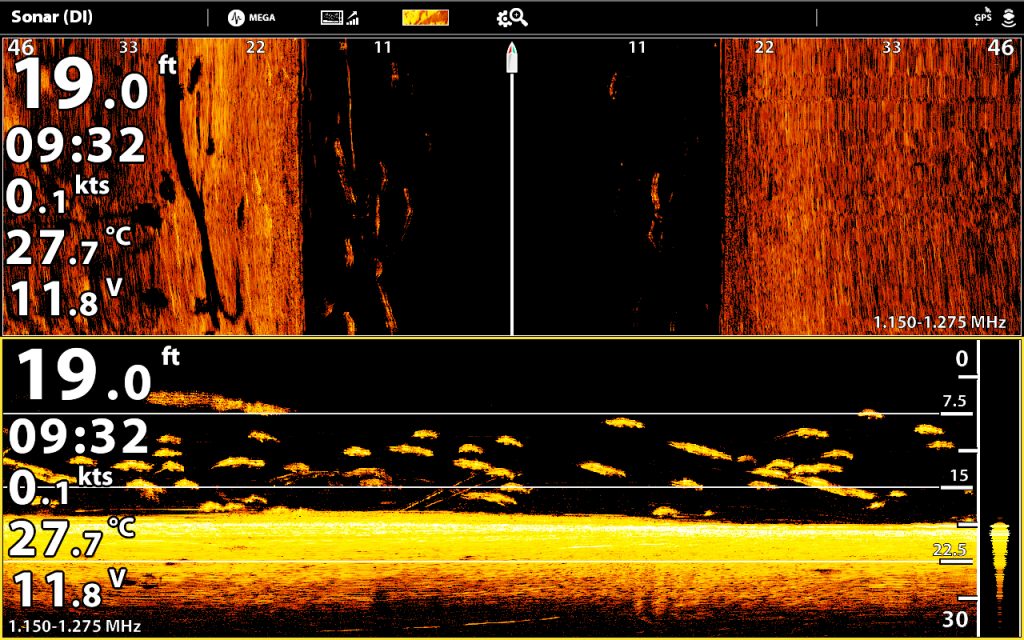 A large school of barra the author sounded up in Awoonga Dam, showing how well the numbers are coming back. 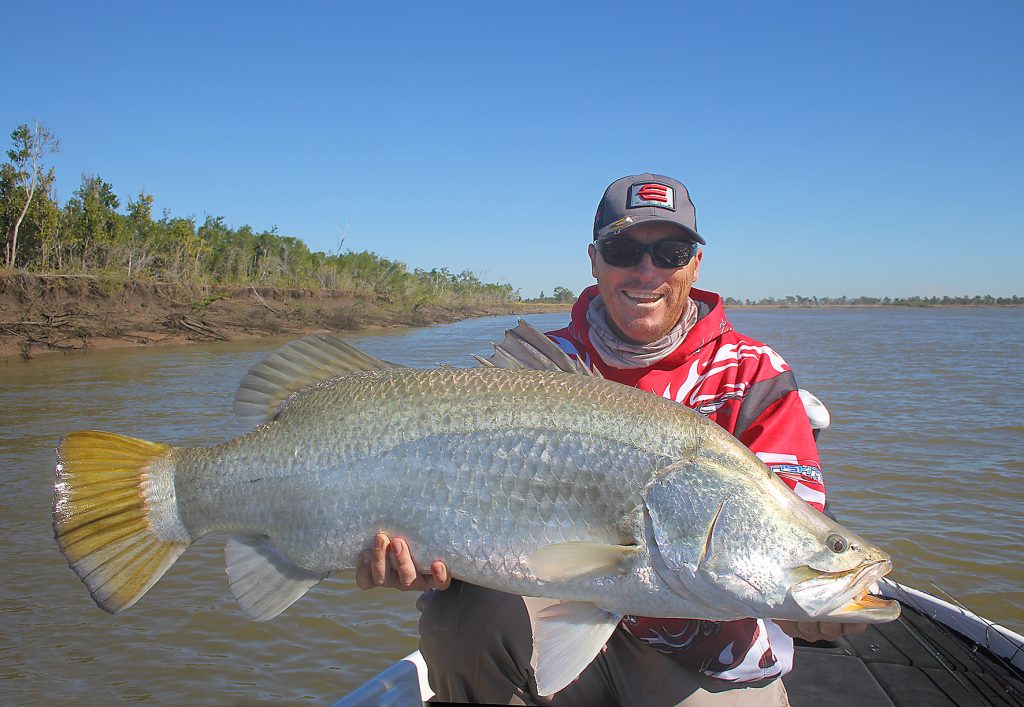 The author with over a metre of Fitzroy River barra caught in winter. 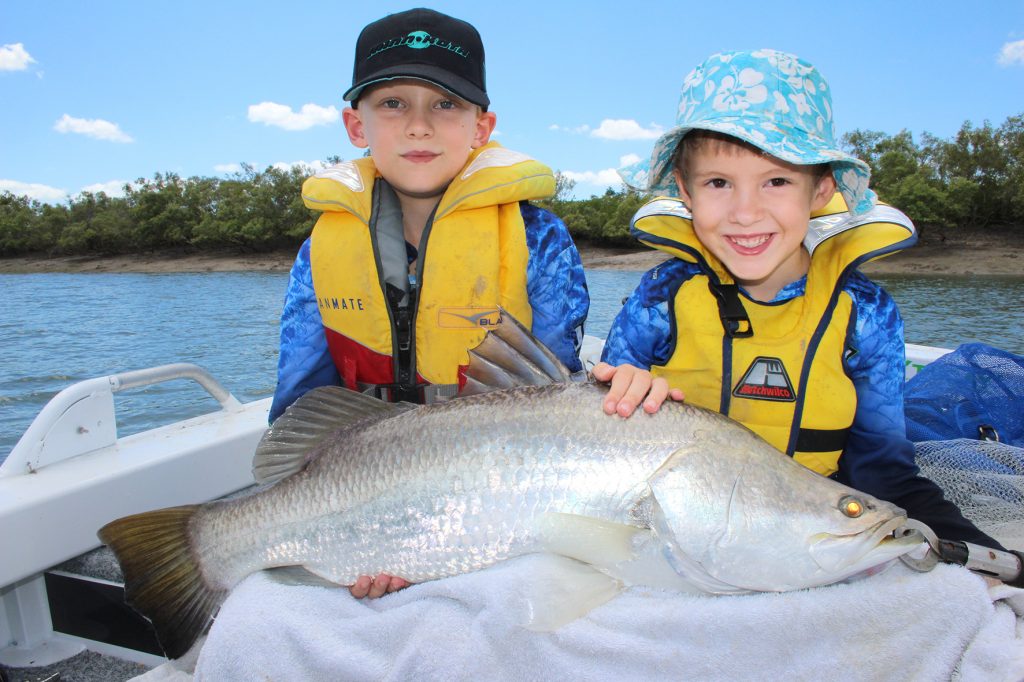 Barra are a great target species for the kids to get into- this one ate a live mullet and the kids loved it. 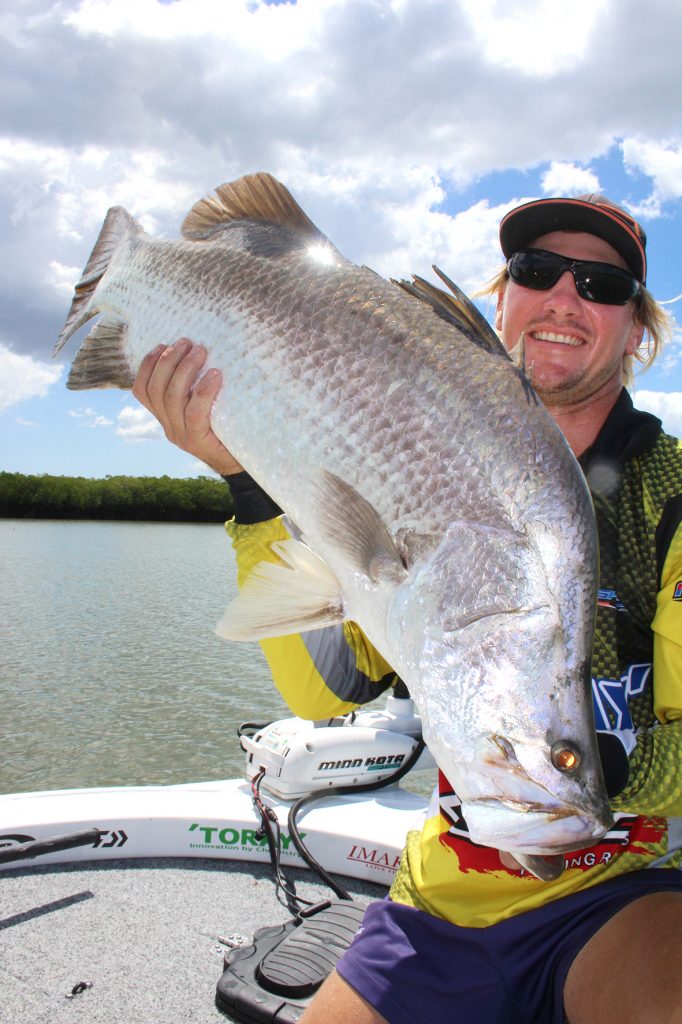 It’s barra like this that keep people coming back. 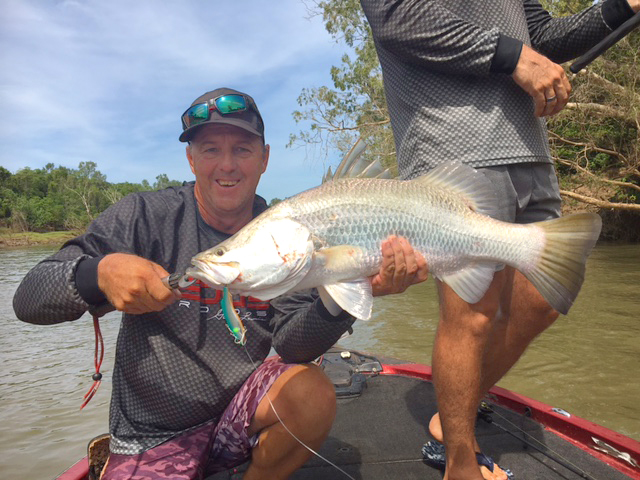 This class of barra is a good average size for the Fitzroy River. Vibe style lures like this Madness Vibe account for large numbers of barra throughout the system. 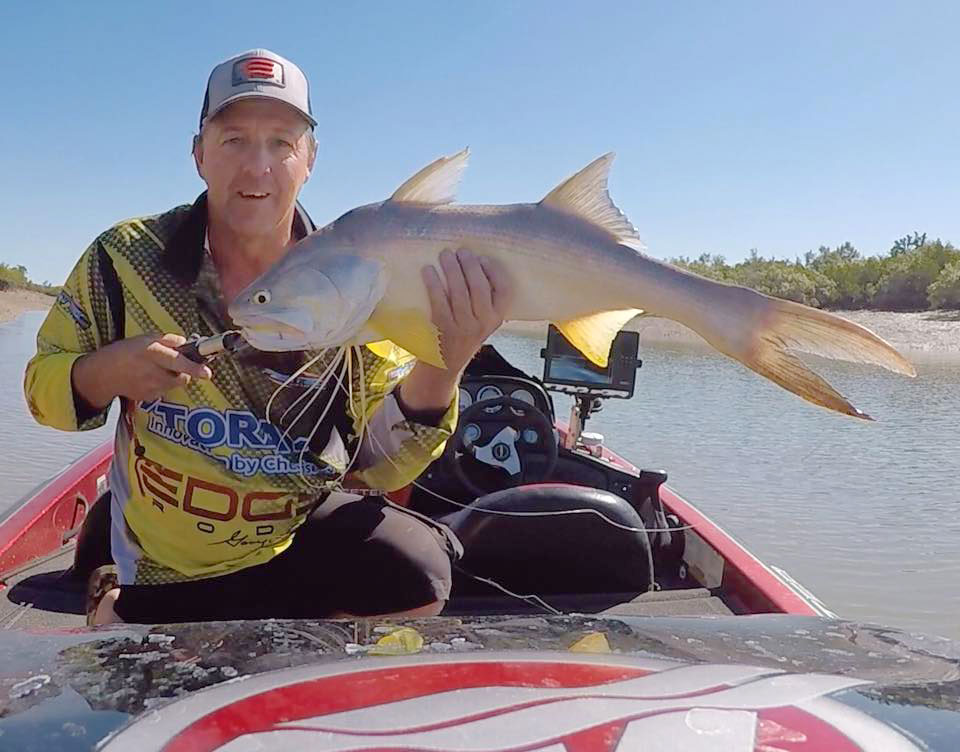 Threadfin salmon or ‘king’ as they are often called, are a great by-catch when targeting barra. They are also a viable target species in the river during the barra closed season.

The good news story for barra fishers is that Monduran and Awoonga dams, after great work from the stocking groups, have made a resurgence. Good numbers of barra are now spread throughout the dams with anglers reporting regular captures of fish in that 650-850cm size range. Recaptures of tagged fish have indicated exceptionally fast growth rates, so the expectations are that they will go from strength to strength. The plus side is that while the salt is out of bounds for barra the dams are fast becoming another viable option.

The town reaches of the river feature large rock bars that offer prime fish holding structure. These rock bars need to be navigated with caution. On a high tide the area looks deceptively safe, but as the water level drops the rocks become visible. The area is well sheltered and provides anglers with the opportunity to fish out of relatively small boats a short distance from ramps. There are boat ramps on either side of the river giving locals and travelling anglers easy access.

Tide sizes or heights are probably the biggest influence that affects how you approach the system. These tides affect water clarity, where the fish position themselves in the system, or more accurately, where the water forces the fish to hold. A basic rule of thumb is that the water clarity is cleaner over the smaller tides and when there is less water flow.

Other issues like trending winds, flood events or time of year can all throw a bit of curve ball at you. Working out these subtleties takes time on the water and astute observations of what tides produce fish at specific locations.

As you head out of the town reaches and make your way further downstream the river becomes more exposed to wind and suffers more from the effects of the tide. The rock bars of the town reaches give way to sand bars that require astute negotiation. As bad as the sand bars can be, there is a navigational hazard that is more of a concern. Many years ago, a large percentage of the river was bordered by man-made rock walls and as the river has subsequently pounded by flood events, the inherent direction of the rivers flow has been diverted as its banks collapsed and shifted. Some of these rock walls are still visible but many are not. They have remained in position, but the river’s banks have moved and left the rocks in places that are often exposed on the lower tides. Although they can be a hazard to navigation some of them have been named ‘the rockpiles ‘and can hold good numbers of both barra and Threadfin Salmon. If you are travelling up or down the river, take special care of these and other hazards.

Probably one of the biggest advantages of the Fitzroy River is that the barra don’t shut down through the winter months, in fact the catch rates can increase as the water cools. Large numbers of barra and threadfin make their way up into the town reaches as the rest of the river cools. They are not only accessible to boating anglers, but impressive catches are also made from people fishing off the banks and pontoons around the boat ramps. Cast netting mullet and prawns then using them as live baits is the go to technique and you can often observe bank fishers casting lures while waiting for a bite on their bait rods.

Barra in the Fitzroy River are no different to others and the standard techniques work for them. If you are a lure fisher the stand out lures are the standard paddle-tail soft plastics, soft vibe lures and shallow and deep diving hardbodies. Cast and retrieve techniques as well as trolling produces consistent numbers of barra and threadfin.               Bait fishers are not left behind and the river is a healthy system with plenty of bait. Mullets, live and dead prawns fished on weighted rigs or under floats can be just as successful. The river also produces good numbers of grunter mixed in with the other two species. Downsizing your lures will often result in an increased number of grunter being caught.

If you travel up from one of the southern systems don’t be disheartened if the water looks a tad dirty, the river is not known for its impeccable clarity and the fish don’t have any issues finding your lures. Just fish it as you would any other barra fishery. Local knowledge is a big help and if you are visiting the system for the first time, pop in to one of the local tackle stores for some helpful tips. You could also enlist the services of one of the guides that work on the river if you wanted a good starting point.

The Fitzroy River is fast becoming known as a very accessible barra fishery and you have to admit that there are not many places that you can fly into an airport and be fishing for barra almost as quick as you can change your clothes.

Out of Season Barra Etiquette

by Dan Kaggelis • Another barramundi open season has come and gone and for many anglers it has been a tough one. The severe lack of monsoonal activity and consequent flooding rains across the state […]

by Gordon Macdonald • As the Murray cod season has been open for over a month and with the barramundi season due to re-open on 1 February at midday, I thought I would tie a […]