None of us particularly enjoy paying taxes, but when those levies take the form of a prize catch stolen from our lines by a hungry predator, the pain is real!

“I’ve been sharked!” If you’ve done much offshore fishing, especially (but not exclusively) in our northern waters, that’s likely to be a frantic call you’ve heard, or an unpleasant event you’ve experienced first-hand. 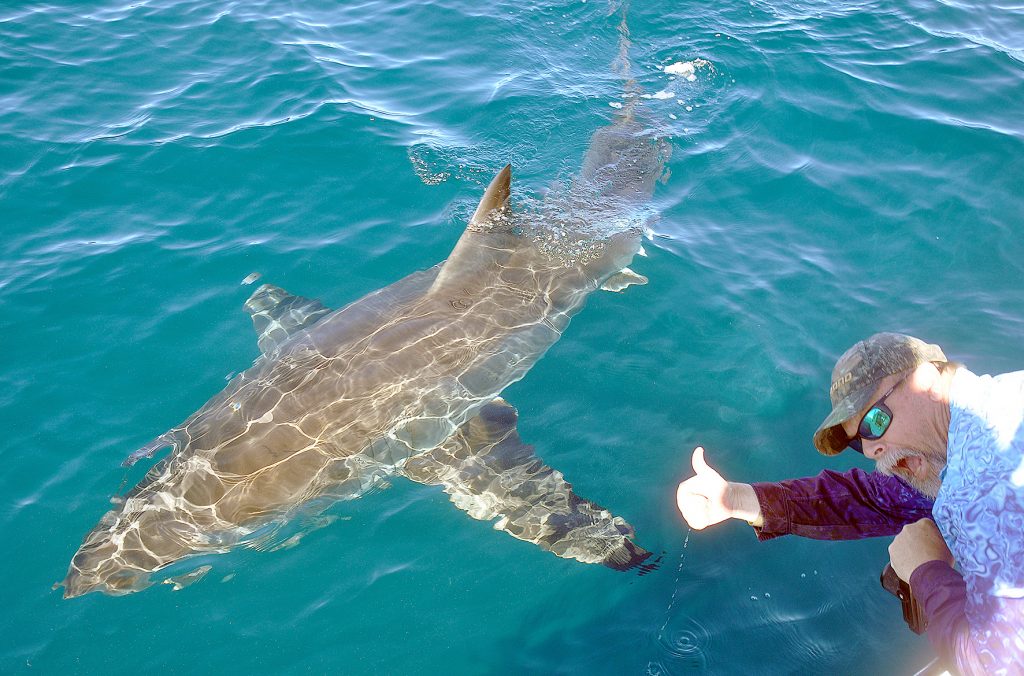 Sometimes, you’re better off pulling your lines in and simply enjoying the experience when you receive an unexpected visit like this at sea. 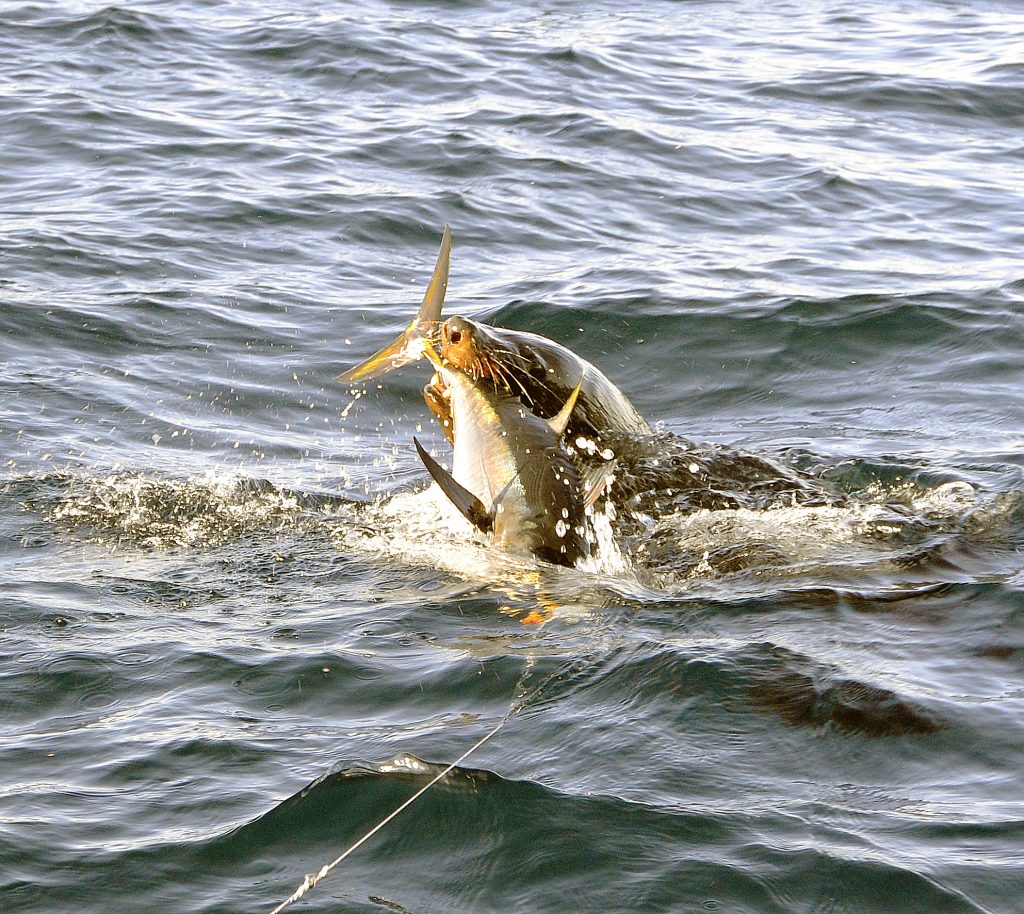 This is what happens when Sammy the seal decides he needs your tuna more than you do! 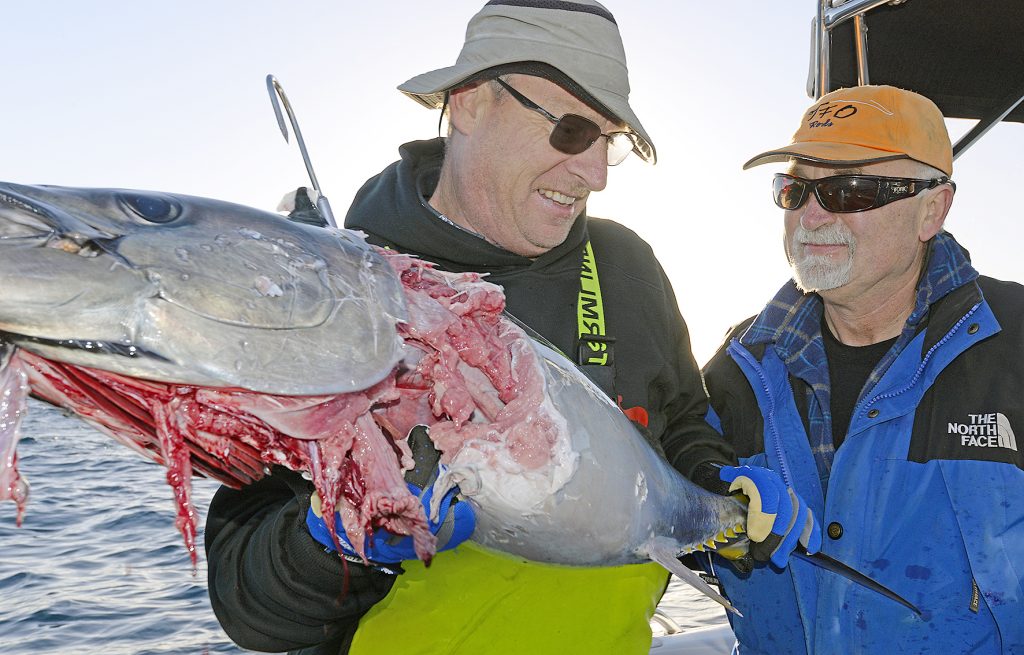 Oh dear… The aftermath of a seal attack on a hooked southern bluefin tuna in Tasmanian waters. There’s still plenty of good meat left on the back end of this fish, and it has certainly been well bled-out! But avoid eating any flesh that has been in direct contact with the seal’s mouth (especially raw!) as these marine mammals potentially carry some nasty pathogens. 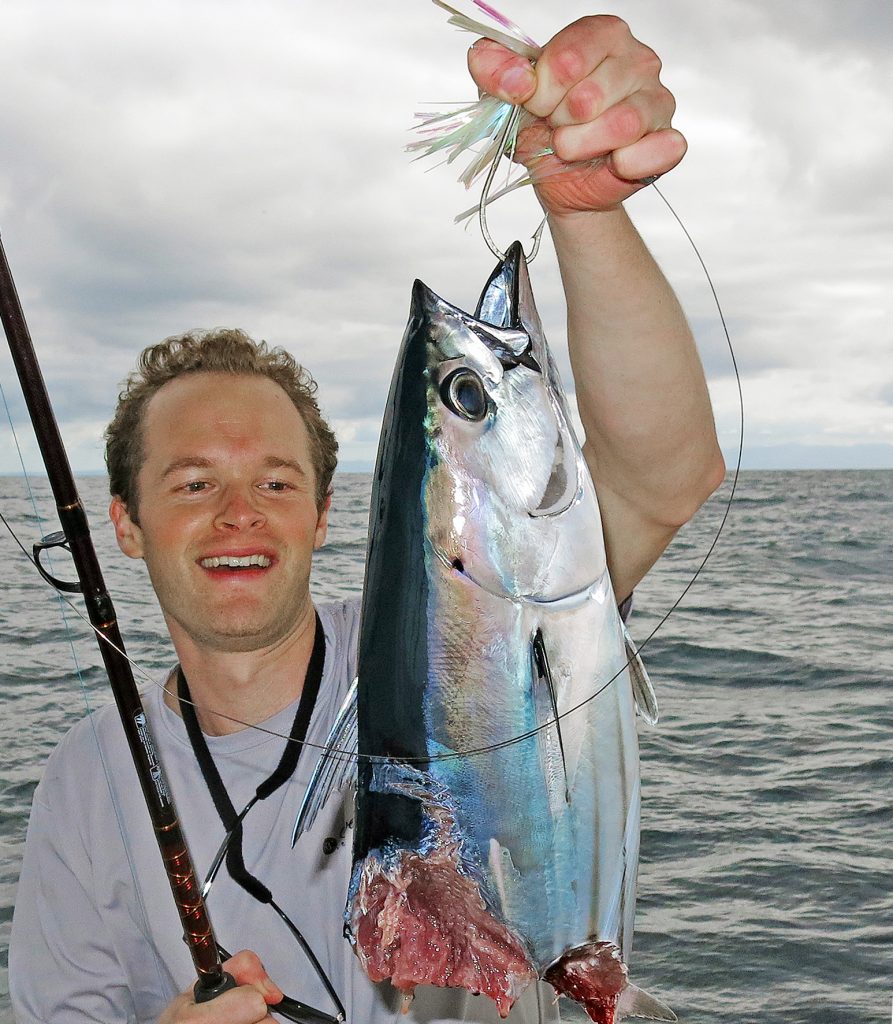 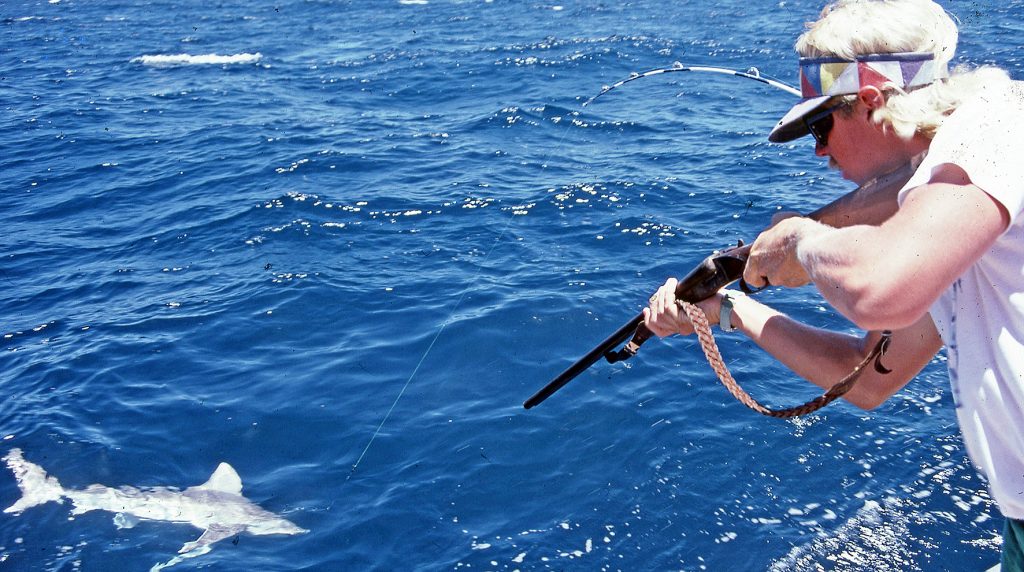 Well, that’s one way of dealing with the men in grey coats… although it’s not a highly recommended one!

It’s a fact of life that the struggles of a hooked fish can sometimes attract the unwanted attentions of larger predators. Sharks of various types are the most obvious candidates in the role of nature’s unforgiving ‘tax men’, but predation of hooked fish can come from other sources, too.

Seals, dolphins, killer whales, barracuda, big cod and groper and even birds such as pelicans and sea eagles have all been known to nab a hooked fish from time to time. Where I live, on the far south coast of NSW, there are plenty of accounts of giant flathead grabbing smaller flatties, whiting or bream as they’re being reeled in. Sometimes, these big lizards hang on long enough to be netted, photographed and released. More often than not, they manage to spit out their intended meal. While a little less common, the same thing happens from time to time with Murray cod in freshwater, and I’ve even had giant eels try to grab my hooked trout in New Zealand’s rivers!

While many of these encounters are unusual, one-off events, shark and seal attacks on hooked fish have become a significant issue in many fisheries — to the point where they may be seriously impacting fish stocks and playing a role in dwindling catches.

It’s a simple fact of life that both sharks and seals have ‘wised-up’ to human fishing activities in specific areas, and nowadays actively follow vessels in the hope of obtaining an easy meal. There’s good reason to believe that they can even detect the changes in motor revs and other subtle indicators that point to a hookup, and thus ring their dinner gong.

In scenarios such as the black marlin fishery along the outer Great Barrier Reef, where most anglers these days choose to release the bulk of their catch, it’s highly likely that predation by sharks is now the leading cause of marlin mortality. Increasingly, this will result in pressure on anglers to alter their activities. Similar shark predation hot spots occur in places like Hervey Bay and around the mouth of the Jardine River on Cape York, while far to the south, seal attacks on hooked tuna can make life difficult indeed for fishers in Tasmania’s coastal seas.

In future, we’ll need to factor this unwanted attention from opportunistic predators into our day-to-day behaviour as recreational anglers. Despite vocal claims by some pundits, the answer isn’t simply to kill more sharks (or seals). These predators play a vital role in the marine ecosystem, and stocks of many shark species, in particular, have already been depleted by rampant over-harvesting throughout the world’s oceans, including unsustainable activities such as shark ‘finning’. The underlying problem isn’t caused by too many sharks and seals so much as it is by adaptations in their behaviour: changes we have unwittingly ‘taught’ them to make.

There are no easy answers to this growing problem, but adherence to a simple, four-point plan can definitely reduce the incidence of predation on hooked fish. Those four steps are as follows:

2. Avoid cleaning fish or discarding bait on or close to popular fishing grounds.

4. If sharks or other predators become an issue, stop fishing and change locations.

Following those four basic steps won’t solve the predation problem, but it can certainly help to ameliorate it… and we all need to play a part in addressing this increasingly thorny issue — otherwise we may just find ourselves taxed out of the game entirely.

Back to Basics: Which is the ‘lecky for you?

by Steve ‘Starlo’ Starling • Last month we looked at the benefits of using an electric motor. Now it’s time to examine the choices on offer and decide which make, model and configuration might best […]

Giving your lures a tune up

January 19, 2021 Fishing Monthly Back To Basics, How To Comments Off on Giving your lures a tune up

• by Steve ‘Starlo’ Starling Just like a car or a guitar, lures do their best work when they’re in tune and on song.       It’s possible for almost any style of lure to go […]