Many of us, myself included, who live in our larger coastal cities often travel far and wide to remote and exotic locations in search of that ultimate fishing spot, often ignoring what is right under our noses. The metropolitan cities of Melbourne and Geelong are littered with many excellent kayak fishing opportunities, all within a short distance from the centre of town. This month’s kayak hot spot is a perfect example, located less than 10km as the crow flies from downtown Geelong, providing safe, protected water with easy access. It’s a kayak angler’s dream location!

Access
Grammar School Lagoon, so named due to it proximity to Geelong Grammar School, is a small bay located at the northern tip of Corio Bay’s inner harbour. The lagoon itself is predominately made up of shallow weed flats with the deeper sections home to the Lagoon Boat Club and a large number of swing moored yachts. It’s in and amongst these yachts that most of the action happens.

There are a couple of different launch options for kayak anglers, but my preferred launch site is a small beach located near the jetty west of the boat club, which provides almost instant access to the swing moorings. There is also a small concrete boat ramp located further to the west in Limeburners Bay.

Target Species
One of the major draw cards to fishing a location such as Grammar School Lagoon is the variety of species on offer. Pinkie snapper are plentiful and available all year round, as they come into the lagoon to feed on the plethora of baitfish that seek shelter under the boat hulls.

Similarly, bream are a common catch in the area, although they are considerably more fussy than their red cousins and take a more considered approach.

Methods and Techniques
There are a number of effective techniques anglers can use to successfully catch fish at the Grammar School Lagoon. As always when chasing fish in structure, casting and retrieving a combination of soft plastic and hardbodied lures is by far the most productive way to entice a bite. Soft plastics are commonly used at the lagoon and to great effect.

Grub pattern plastics are a great place to start. I prefer to use a range of colours, both natural and UV reactive. Generally speaking, in periods of low light such as dawn and dusk or when there is significant cloud cover, I prefer to use UV colours such as motor oil. During the middle of the day when the sun is high and conditions are bright, I switch over to more natural coloured grubs such as bloodworm and watermelon.

Jigheads are another important consideration, and as a general rule, I always go as light as possible to effectively allow the grub to sink to the bottom, but of course wind and tide movement will effect how the grub sinks, so adjusting your jighead is often required. A good starting point is 1/16 or 1/20oz. The water in the lagoon is shallow and usually you’re fishing in less than 2m. 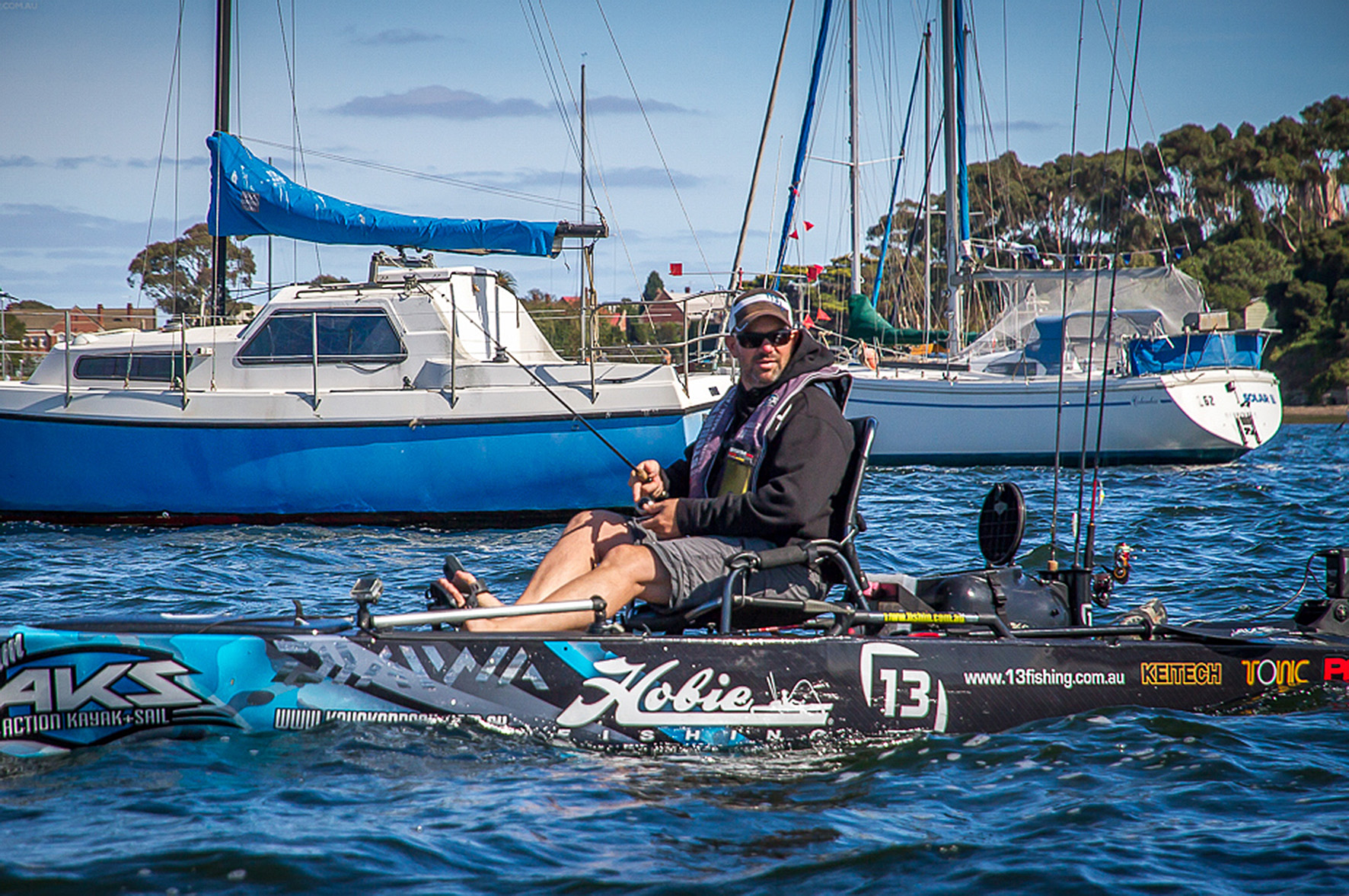 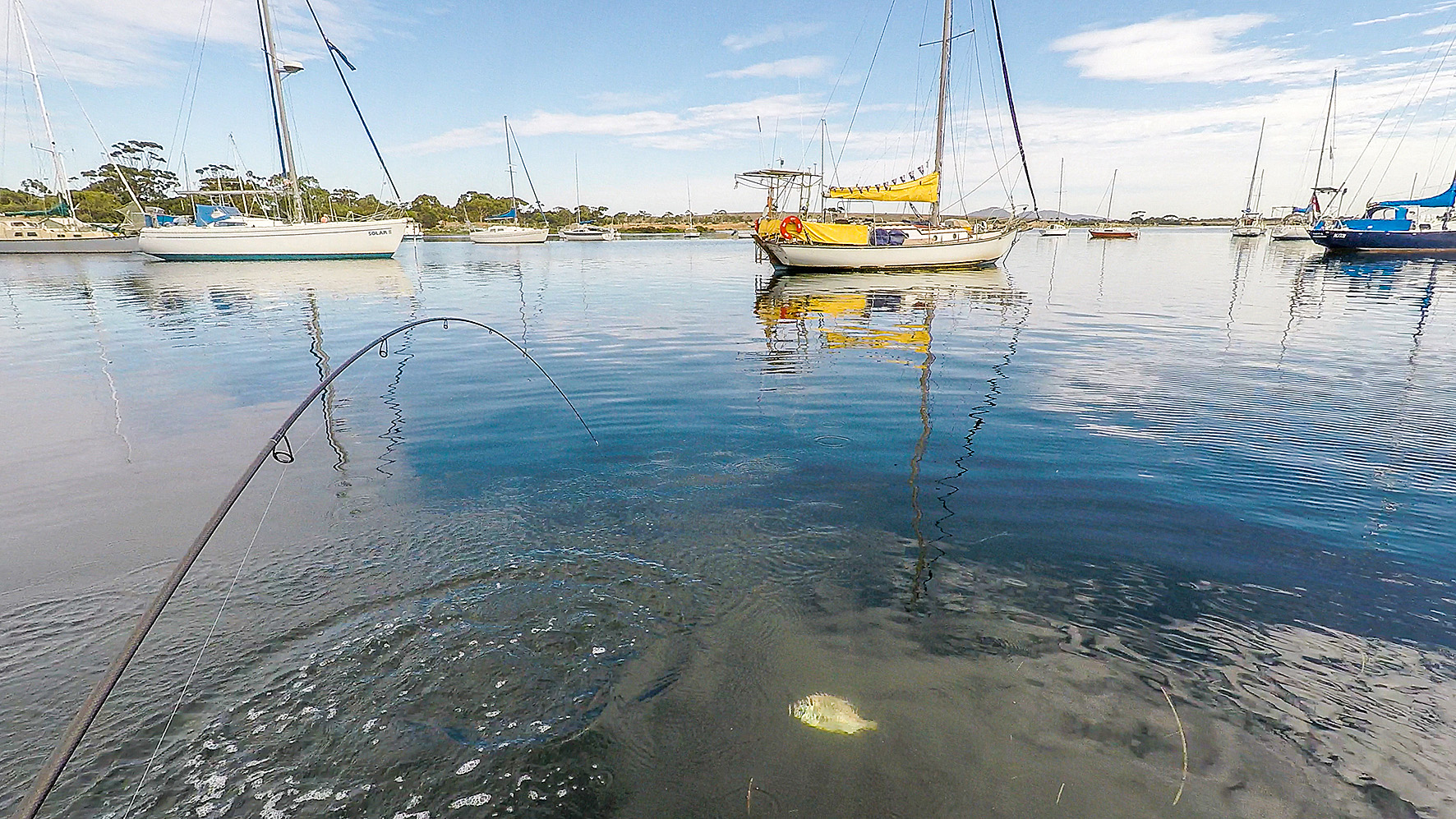 The author hooked up to hard fighting pinky snapper taken on a ZMan Slim SwimZ cast in between hulls targeting roaming fish. 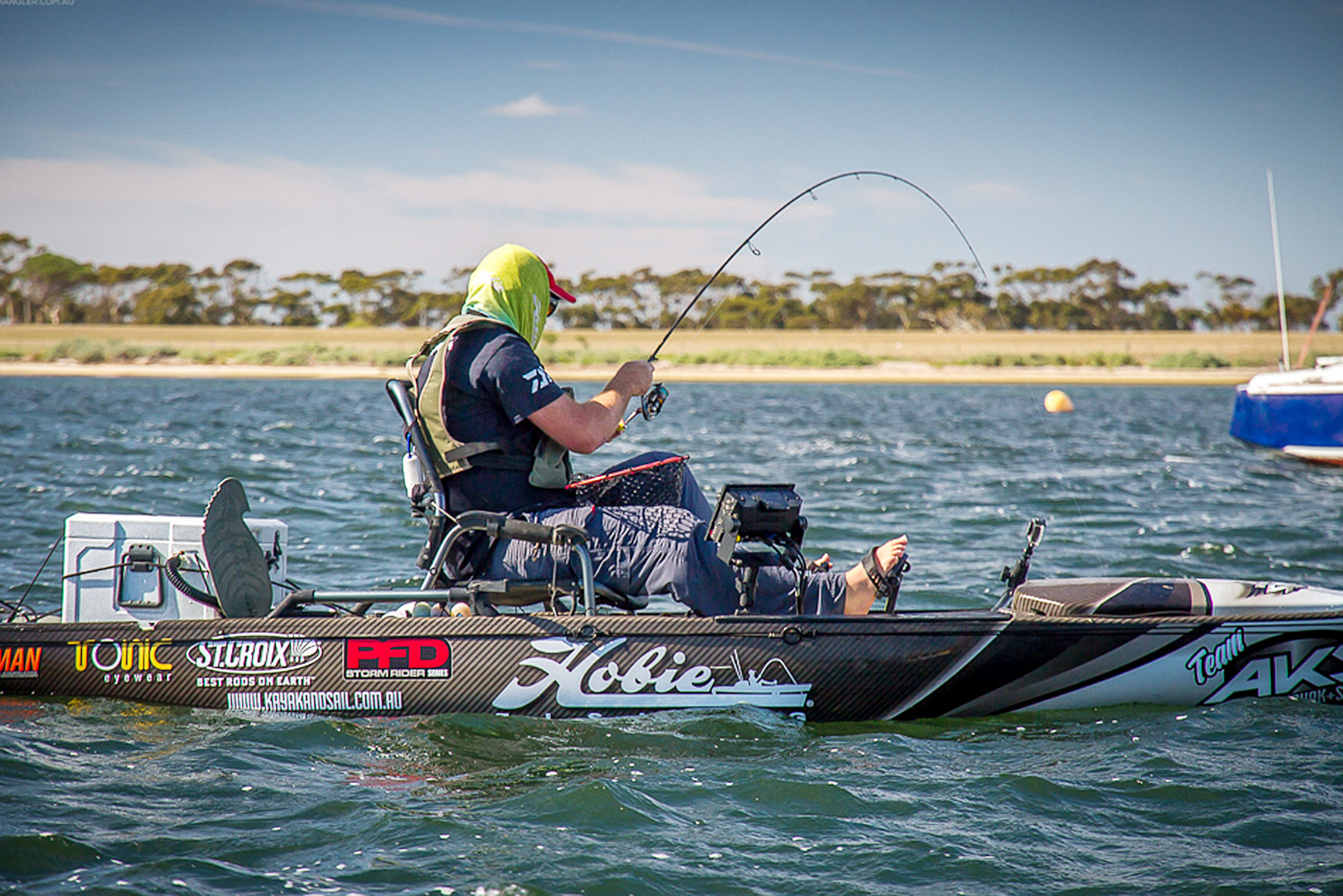 Another hook up, this time to a solid pinky pulled from a boat hull on a Cranka Crab. Photo courtesy of Darren Weda. 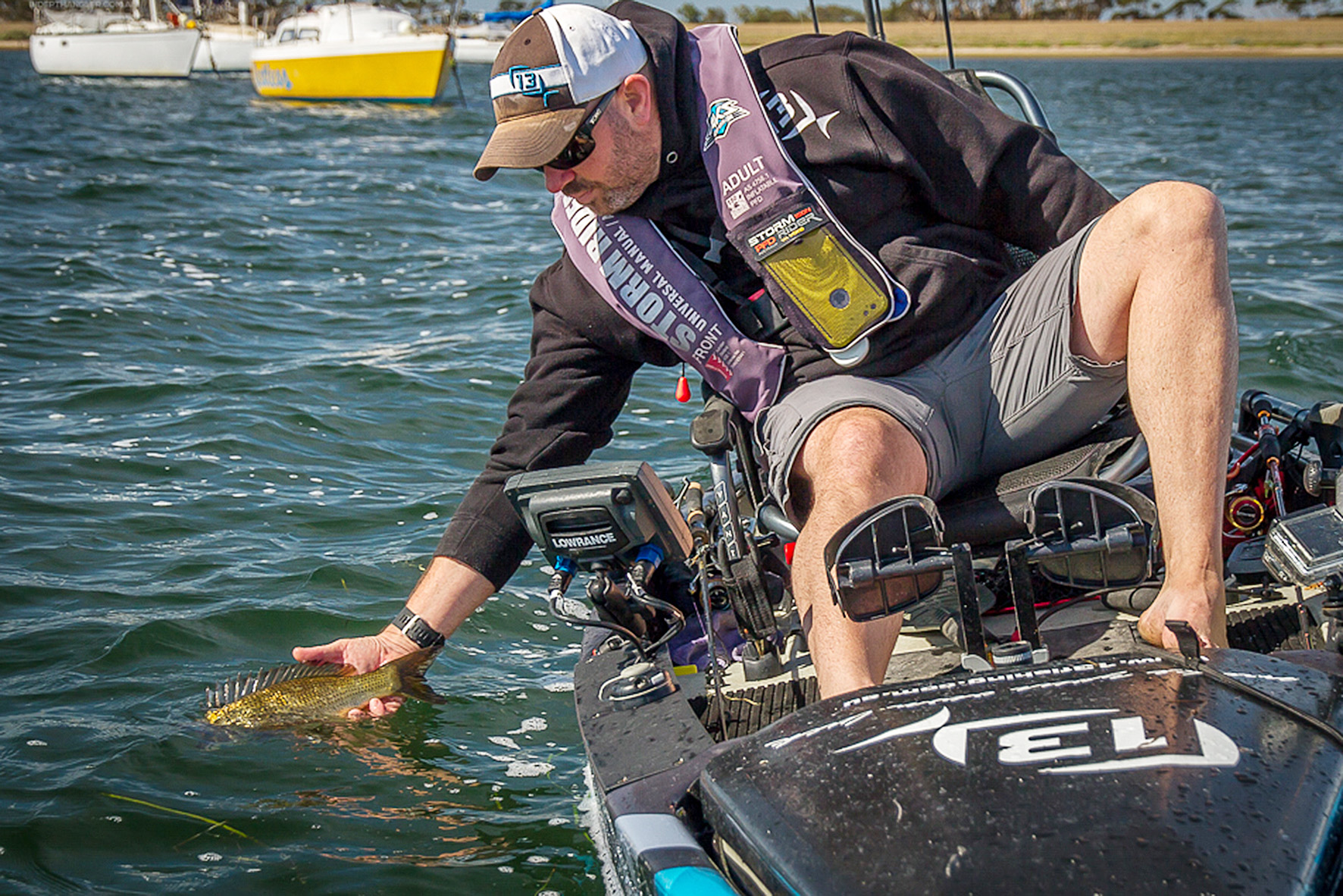 Catch and release plays an important part in managing our fisheries. Dale Baxter returns a chunky bream that took a liking to his Cranka Crab. Photo courtesy of Darren Weda.

The fish will be holding where the bait is, so I’ll cast your grub in tight against the boat hulls, then I’ll lay my braid on the surface of the water, allowing the grub to drop to the bottom as naturally as possible. When fishing boat hulls, often the bream or snapper will be holding high in the water column just below the boat hull, so the initial drop is often when the action takes place. Watch your line for any indication of a bite. Once on the bottom, hop your grub with a few subtle lifts of the rod tip followed by a long pause, this technique can be particularly effective when targeting bream.

Similarly, casting hardbody crab imitation lures worked in an almost identical way to the grub can be dynamite. Small vibes such as the Strike Pro Micro Vibes again fished in a similar way can also produce the goods.

When fishing the lagoon, I have often found that the bream, trevally and snapper will move out from under the hulls and feed on the large amount of bait fish that school up in the area. During these times, you will be able to see the fish moving under your kayak, and casting small baitfish profile plastics and retrieving them slowly can bring these roaming fish undone.

Safety
The waters at Grammar School Lagoon are well protected and therefore the lagoon is a great place to fish when the weather prevents you from fishing other locations. I would recommend taking care when leaving your car, as unfortunately cars are regularly targeted by thieves in the areas, so making sure your car is parked in a visible position and leaving nothing of value in your care is well advised. As always, wear an Australian standards PFD and keep a bailer on board as required by Victorian law.

Conclusion
Often when time is short, I find spots like Grammar School Lagoon the perfect location to spend a quick few hours on the water. With its close proximity to Victoria’s second largest city and the large variety of species available, it is a great spot to have up your sleeve on those occasions when time is of a premium.

A quick splash and dash mission can often result in a good feed of pinkies or flathead, or even just the exhilaration of pulling big blue-nosed bream out from under a heavily encrusted boat hull is more than enough to convince me to hit the Grammar School Lagoon in the yak!

Hotspot: That’s why they call it ‘Red’cliffe

by Reece Thomas • If you are a kayak fisher that has ever dreamt about catching big snapper in shallow water in Queensland, then you may have ventured to Redcliffe, or put this location on […]

by Dayne Taylor • Lake St. Clair, or Glennies Creek Dam as it is also known as, can be found nestled among the undulating foothills of the Mount Royal Range, approximately 30 minutes’ drive from […]

by Justin Willmer • Appropriate clothing is an important part of any angler’s kit, whether they’re fishing the surf or rocks, hiking trout streams, venturing into the northern mangroves or paddling local waters. For kayak […]