Borumba Dam is a unique impoundment and, unsurprisingly, is a great favourite with many anglers.

It’s quite close to the township of Imbil and has main catchments of Borumba, Yabba and Kingham creeks. It’s within very easy reach of major population centres, and being set into a very impressive rainforest environment, it’s a fishery that offers a diversity of scenery virtually unheard of elsewhere in southern Queensland.

Piscatorially, the big drawcards are southern saratoga, bass and golden perch, while delicious red claw crays are also worth some effort with the opera house pots and a favourite bait.

Borumba Dam has undergone some major transformation, both in the size and scope of the impoundment, which was formed around 50 years ago, as well as changes to the habits of the fish within its tree studded waters.

When I first fished Borumba Dam 25 years ago, the wall was much lower, and the main fish were saratoga with the odd golden perch thrown in.

There was a golden perch hatchery at the dam’s adjacent camping area, with terrific big toga and great goldens in glassed walled tanks – a big attraction.

Progressive moves to stock pile even more water plus manage major rain events – as the water leaving this dam eventually joins the Mary River – saw the dam wall raised by 2.5m in 1997, and another 1.6m in 2009.

This fishery is a fly angler’s dream, and on my first few trips, dry flies of all persuasions worked very well. A size 6 fly landing beside a bit of standing timber – especially if a couple of spars were in close proximity to one another – would see a swirl, an upwards bulge of water at the trunk and the fly disappear. In those days surface flies and lures were all the rage, and the fishing nothing short of sensational.

Then things changed. Bass were introduced in big numbers and soon featured in catch records. When the dam wall was raised, even more countryside and timber was inundated. The saratoga and bass fishing remained much the same until a few years ago when bony bream magically appeared in immense numbers in the upper arms and main basin. Bass grew fat and prospered, and the saratoga changed their diet from insignificant insects to big fat bony bream, which meant that while surface lures and flies might still be worth a try, a soft plastic or spinnerbait for the lure angler is now go-to gear. Bony bream imitations for the fly angler are usually first out of the fly box. 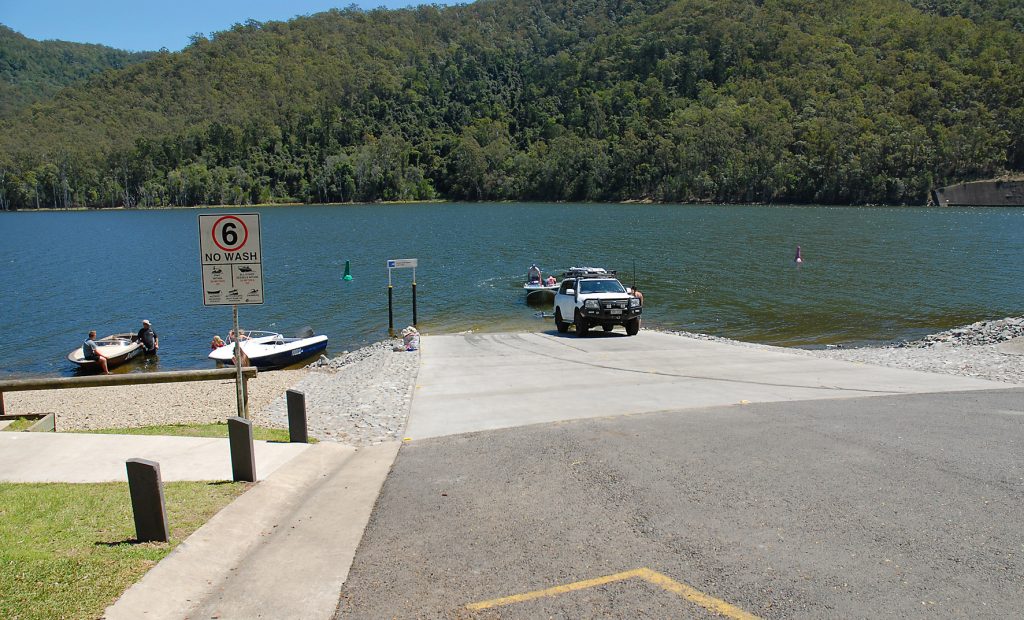 The two-lane ramp at Borumba allows for easy launch and retrieval of a boat. 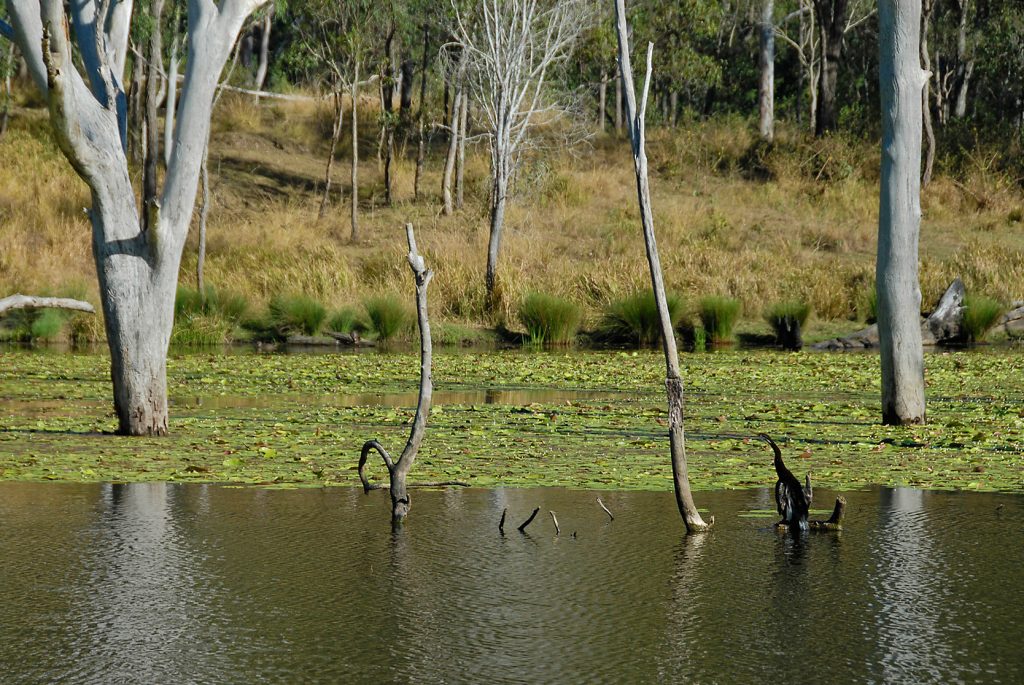 Lily pads harbour fish in this impoundment and a stealthy approach will usually provoke a strike. 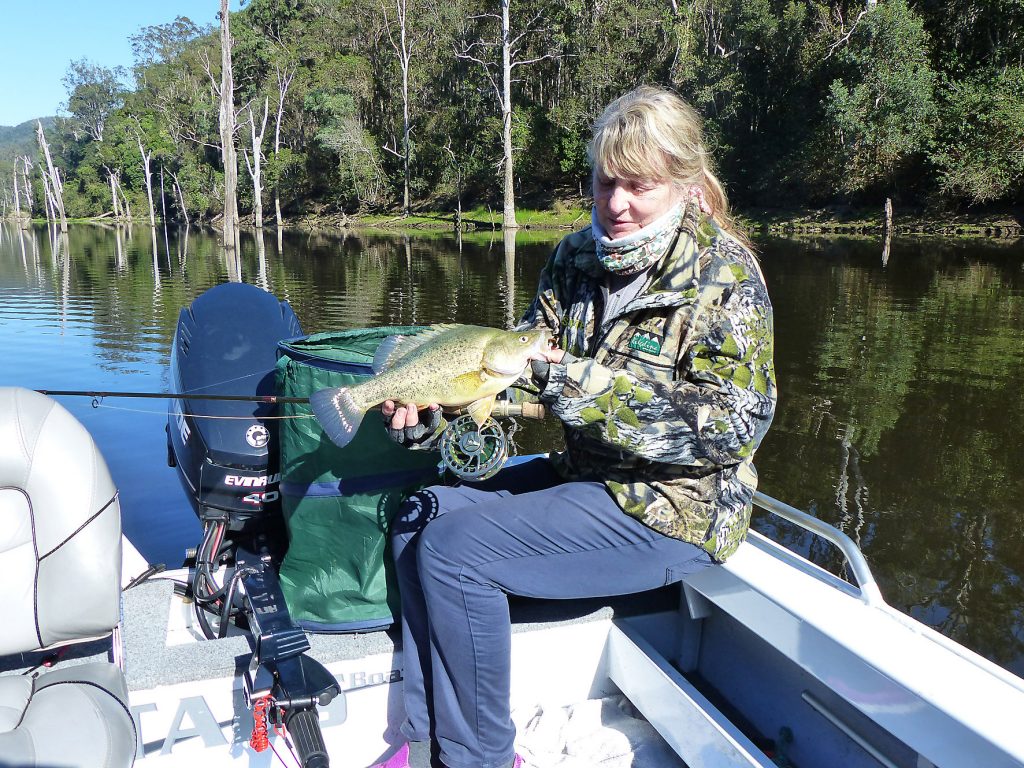 It’s not all about bass and toga at Borumba – there are plenty of golden perch as well. 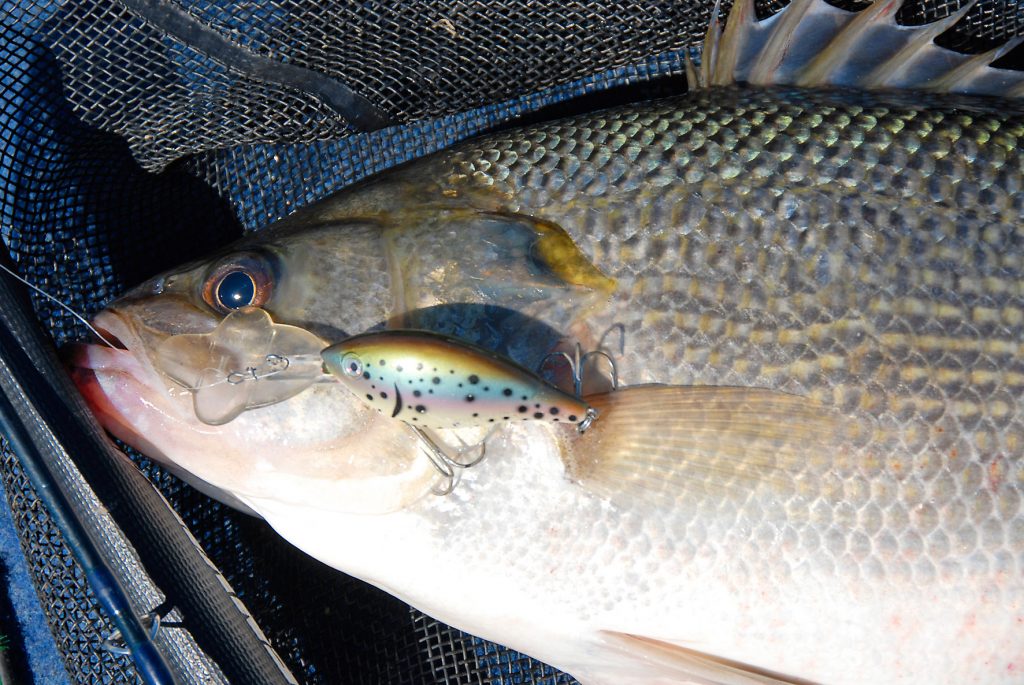 Borumba bass are fat and have a lot to offer sportsfishers. 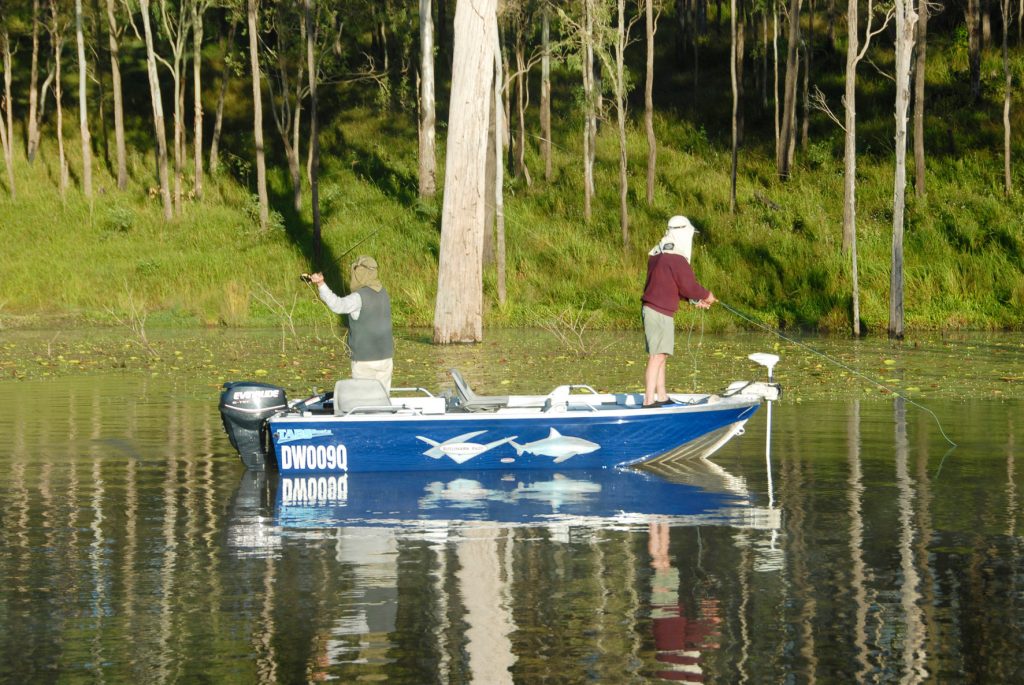 Fly anglers enjoy the features of this dam, with the possibility of a big saratoga or bass always in the mind. 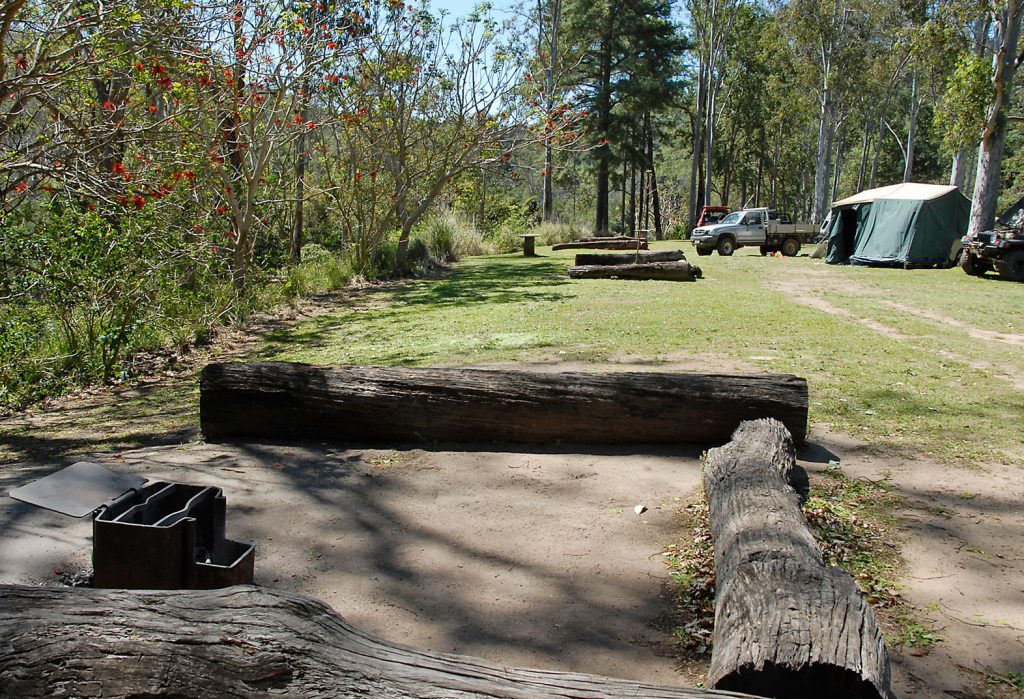 Fireplaces are always a popular attraction at the Borumba Dam camping grounds. 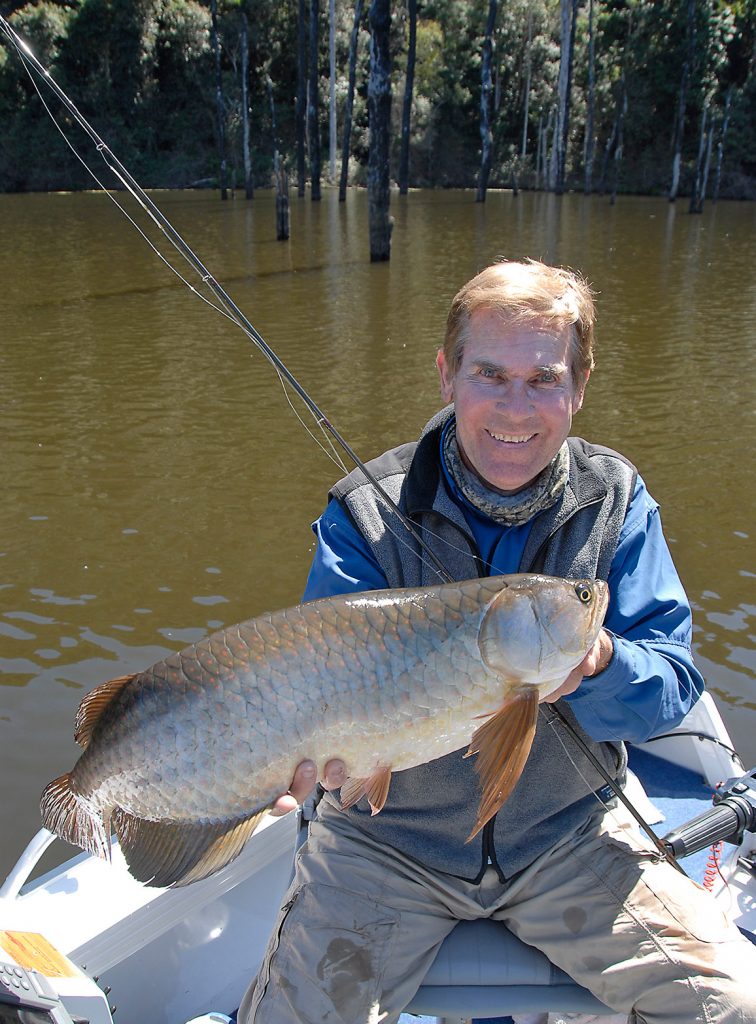 Southern saratoga are one of the great drawcards for Borumba anglers. The author caught this fish on fly gear. 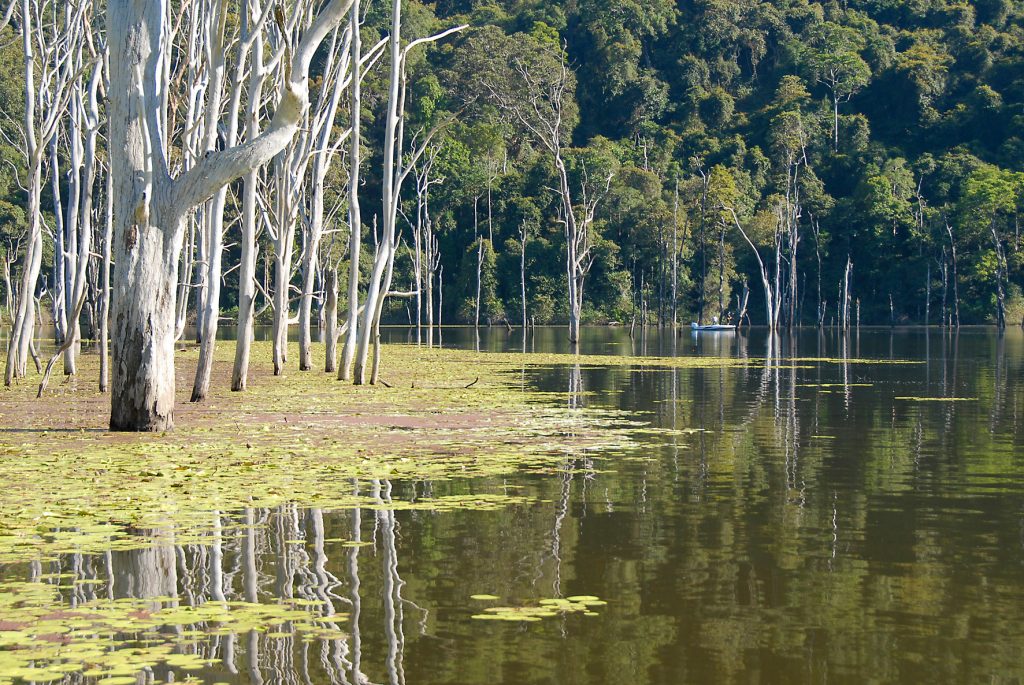 Weed and lily edges beckon the angler in many sections of Borumba Dam.

A camping trip is part of the fun of a Borumba fishing trip at this time of year, and there’s the choice of staying at the Deer Park camping ground on Yabba Creek, which is within five minutes drive of the dam’s launching ramp where great camp sites are right by the water with caravans and cabins also available for use. Alternatively, setting up the tent or swag at the picturesque Borumba Dam camping area, adjoining the dam’s main outflow basin and within sight of the dam wall.

Both campgrounds are ideal for families or really dedicated anglers alike, but the trend is for the anglers poised for a 5am launch to stay at the Borumba Dam camping area, while those more inclined to have a snooze past the alarm are usually at the Deer Park campgrounds.

As the name suggests, there are tame deer there that will nibble gently on some fresh grass or special tucker provided by management.

The dam and the fishing

The launching ramp at Borumba Dam seems to foster a love/hate arrangement with the boating community. Love is when the dam is full or nearly full, and the boat can be moved to the side fairly easily on manageable gravel while the car and trailer are moved away. Hate is when the dam is lower, the ramp’s slope becomes steep, and some large, irregularly shaped and slippery rocks need to be negotiated in order to move the boat to one side and out of other people’s way. The steep slope seems to beckon the craft off the trailer into deep water, and traversing those rocks is no picnic.

Once the boat is underway, the angler is spoilt for choice for a fishing location. In autumn and winter, bass might be found schooling in the main basin and if the sounder marks schools of fish, the fun can start straight away. Schooled bass are nearly always obliging and a blade, ice jig, tail-spinner or other sinking lure. Fly anglers with their fast sink lines can ply their trade in the main basin, but beware of dropping a fly onto fish in any of the timbered arms, as the snags are merciless. A fly touching that bottom with its festoon of dead timber won’t be coming back up.

If the sounder screen is devoid of interest in the main basin, you can head up either Kingham or Yabba creeks for some exploration and fishing action with the standing timber, and respective creek channels, starting at the northwestern end of the main basin. Borumba Creek also adjoins the southwest corner of the main basin, and with it’s standing timber and neat drop-off edges along the submerged creek bed, there’s great habitat for all three main species.

Whether the plan is to fish Borumba Creek or either Yabba or Kingham creeks, the clue is to take it easy on the throttle and try to stay within the old creek beds, as defined by tree lines with an easily noted gap between stands of dead timber, most times away from the dam’s edges. Boat travel in this dam is often accompanied by a few bumps from long drowned timber, so boaters not accustomed to the channels and more cleared areas are wise to proceed slowly until they find their way.

One of the great things about fishing this impoundment is the vast amount of standing timber to attract fish and the angler. Some dead trees are on flats, other stands are in deeper water, and there’s even more along the banks. Whatever the style of fishing in mind, there will be something for all. From my experience, the three main species sought are found virtually anywhere there is timber nearby. It’s not really necessary to whizz right up to the top of Yabba or Kingham creeks to find a toga, bass or golden, but anglers like to seek out all prospective water, even if it does require more travel time.

Bass seem to be found in much the same places as the saratoga with timber, overhanging bushes, lily and weed beds all beckoning the angler to have a cast.

About the only difference in results seems to come from the manner in which the lure or maybe fly is taken. Bass usually hit harder than toga, which seem to sip gently at first before pulling like blazes and jumping as well once they realize that they are hooked.

A big bass these days from Borumba will be anywhere between 47-50cm and possibly bigger, while the toga are virtually off the scale, with metre long fish escaping from bite offs, jumps or other mischief that’s commonly reported. Toga have teeth and they are quite willing to bite-off an offering that’s inside that hard mouth.

Here’s a hint. If you think the toga will be pushovers on 5kg tippet material, think again. There are some very big saratoga in Borumba Dam these days thanks to the steady diet of fish flesh in lieu of measly mudeyes and other mundane insects. On top of this, make sure your hooks are sharp, as these fish have rock hard mouths.

Go for gold up Yabba Creek

Golden perch are nomadic critters, sometimes taken along the banks and drop-off areas within sight of the dam wall, other times right up the tops of the arms.

One area that has always been kind to us when after a golden for a bit of fun, is about four bends up Yabba Creek. It’s identifiable as an area where the main channel divides into two, with a weed island in the centre and an easily fished area of central standing timber on the approach, from the east, just before the division and weed island. After easing through on the left side of the weed island with its fallen timber and perched pelicans, overhanging bottle brush trees on the left invites some eager casts while a long cliff-like bank – also begging for plenty of casts – stretches skywards on the north side of the channel.

For the beginner, it’s some distance up Yabba Creek, but you will recognise the spot as I’ve described it, as a small side creek comes in on the left before the weed island, and there’s some sand about it’s confluence. Don’t think that goldens are the only fish present, as some horse toga live in this area as well.

So that’s Borumba Dam! It’s pretty, it’s well stocked with southern saratoga which is a big feature in itself, while bass and golden perch are very good sport in their own right, and it’s a fantastic place to camp as well. What’s not to like about this fishery?