In March 2019, I wrote an article for this magazine centred on targeting flathead with spin gear using a retrieve called ‘staccato’ which commonly used by fly anglers. I caught a lot of great fish and I often use this retrieve now when targeting saltwater species.

However, after trying the staccato retrieve using my spin gear, I became even more interested in fly retrieves and started to do some research. I found two other fly retrieves which I thought I could apply to freshwater fishing, particularly Aussie bass. Since employing these retrieves using a standard egg beater, I have doubled my catch rate and I’ve also landed some huge bass. Outlined below are the two retrieves along with a refresher on the staccato, which I have also started using when fishing freshwater.

‘Up-and-across’ is a retrieve style familiar to a lot of fly anglers. This retrieve is often used by anglers casting upstream in a river scenario, and is based around using the current to move the fly. Essentially, the angler casts upstream and moves the fly along the length of the river by moving the rod tip from left to right or ‘across’ the river. This retrieve style transfers well to spin gear, especially when you’re using surface lures in fast flowing water.

To perform an up-and-across retrieve, simply cast a surface lure up into a fast moving section of water then wait for the line to go tight and the surface lure to start swimming. Do not wind. Instead, move the lure from side in the fast water by working the rod tip back and forth in an arc. This technique is dynamite on bass because the lure imitates a bug stuck in the rapids (and swimming from side to side rather than up and down the flow), and the fish strike with abandon.

I stress here that this retrieve works best with winged surface lures. If you don’t get a hit within a few minutes, move to the next fast section or try ‘jostling’.

Jostling involves keeping the fly in one spot by using the rod tip to get the lure swimming up and then back to where it originally landed. I’ve heard this retrieve called a few different names over the last few months, so you may have heard it called something else. I stick with term ‘jostling’ because, when using spin gear and surface lures or plastics and employing this retrieve, the lure looks like an insect or fish jostling with other aquatic creatures.

To initiate the jostle, land the lure in a likely spot, wait a few seconds and then wind up the slack line. Once the line is taught, start twitching the rod tip up and down but avoid winding; you basically just want the lure to twitch on the spot. After the line has slackened, wind the slack onto the spool and repeat the process. This retrieve is about keeping the lure in one spot for as long as possible so as to imitate a wounded cicada spinning around or a baitfish twitching on the bottom. Some of the better surface strikes I’ve experienced have been when using this method, but if it doesn’t work, I usually switch to a staccato retrieve.

The staccato retrieve was the first fly method that I tried with spin gear because it is based around a ‘twitch and pause’ technique which I was already familiar with. However, the staccato requires the angler to think far more about the presentation of the lure and place a lot of focus on the pronounced movement of the bait during the retrieve.

The idea is to cast the lure and then allow a long pause before beginning the retrieve. This is the first pronounced movement in the method. Once the pause is complete, twitch the lure once or twice before pausing again. The size of twitch is important. It should be as distinct as possible but without the lure losing its core action. The objective is to create a lot of disturbance on the twitch followed by a lengthy pause. It is almost like separating the twitch and pause into two separate retrieves. The bass usually pick the lure up on the pause but I’ve also had fish hit during the twitch.

A good fly angler is a master caster as this is perhaps the most important part of fly angling, and it’s honed from the beginning of a fly fisher’s journey.

My experience as a spin fisho is the opposite. I learnt to work a lure long before I worked out how to cast properly. So, learning these techniques and putting them into practice has meant focusing on my casting and trying to best mimic the types of casts that I have seen fly fishos make.

With that in mind, it is important to make sure the lure lands as subtly as possible, because the idea is to get the fish interested before any retrieve begins. I like to employ an ‘arc’ style cast when chasing Aussie bass because the lure lands naturally.

An arc cast involves pitching the lure up and out rather than flat and out. The idea is to create an arc in the line so that the lure comes straight down on a spot almost vertically, rather than coming from the side. This type of cast ensures skittish bass are not put off, and often ensures a hit during the first pause of a staccato retrieve.

I find the up-and-across works particularly well in fast water and is also well suited to skinny water. It is an excellent way of working a rapid thoroughly before moving to slower pools.

The jostle is effective in both slow and fast water and works well in both rivers and dams. I tend to target shade lines and rocky points using this retrieve but have also found that it works well if fishing on top of sunken timber.

The staccato works anywhere but I do use it a lot around reed-lined banks and weed beds.

I use a lot of different lure types when employing these strategies (see Fact Box 1 and 2) and I have already mentioned plastics and surface lures which do catch me a lot of fish. However, small diving lures warrant a special mention. They work well when using an up-and-across retrieve because they can be run back and forth in a rapid, but they are also a good choice when you’re using a staccato retrieve.

That said, there is no hard and fast rule. I recommend trying lots of different lures.

Rod and reel choice is particularly important. I started out using rods with extra fast actions, but found this was a mistake as the rod did not closely imitate the action of a fly rod. Now, I use rods with a medium action because, for me, a medium action, light spin rod is as close as I can get to a fly rod. There needs to be a bit of play in the tip of the rod because there is very little winding going on when using these retrieves but there should be a whole lot of lure movement, which can only occur with a tippy rod.

For working surface lures, I use a Rovex Revenge 2-4kg rod matched to a Rovex 2000 reel spooled with 6lb braid and 8lb leader. When fishing plastics and divers, I use a Quantum Energy 6’0” 2-4kg rod matched to a Quantum Smoke S15 spin reel spooled with 4lb line and 6lb leader. I use the heavier outfit for surface simply because I fish a lot of heavy cover with cicada imitations and need the extra power. 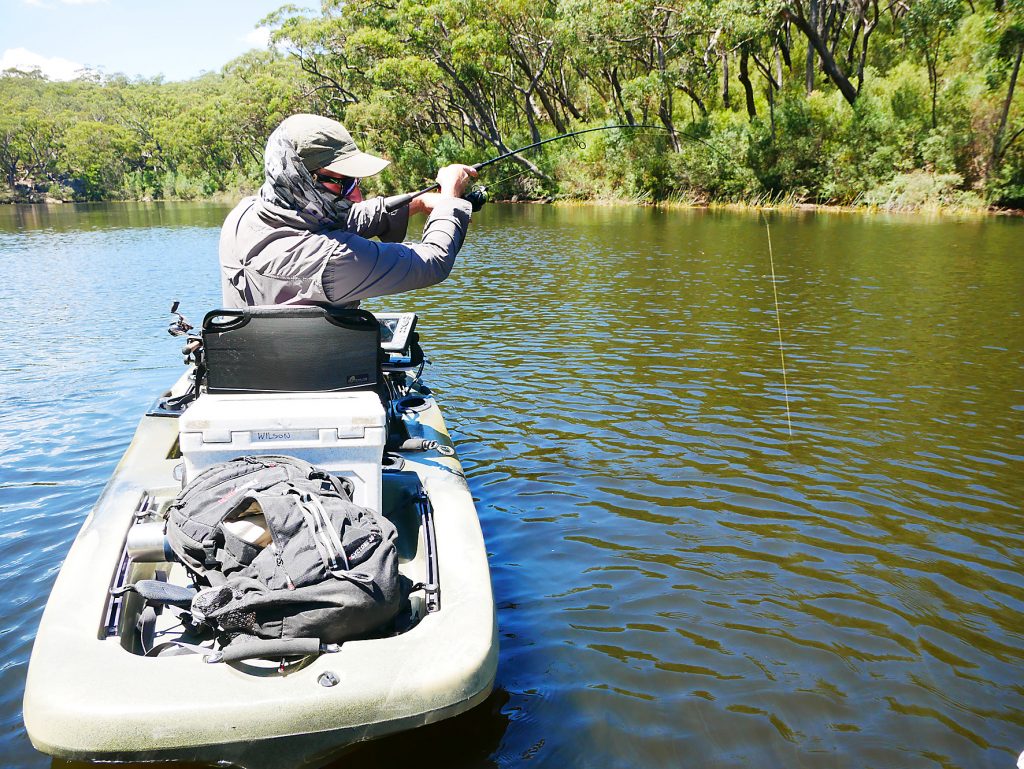 Try the jostle retrieve down deep. 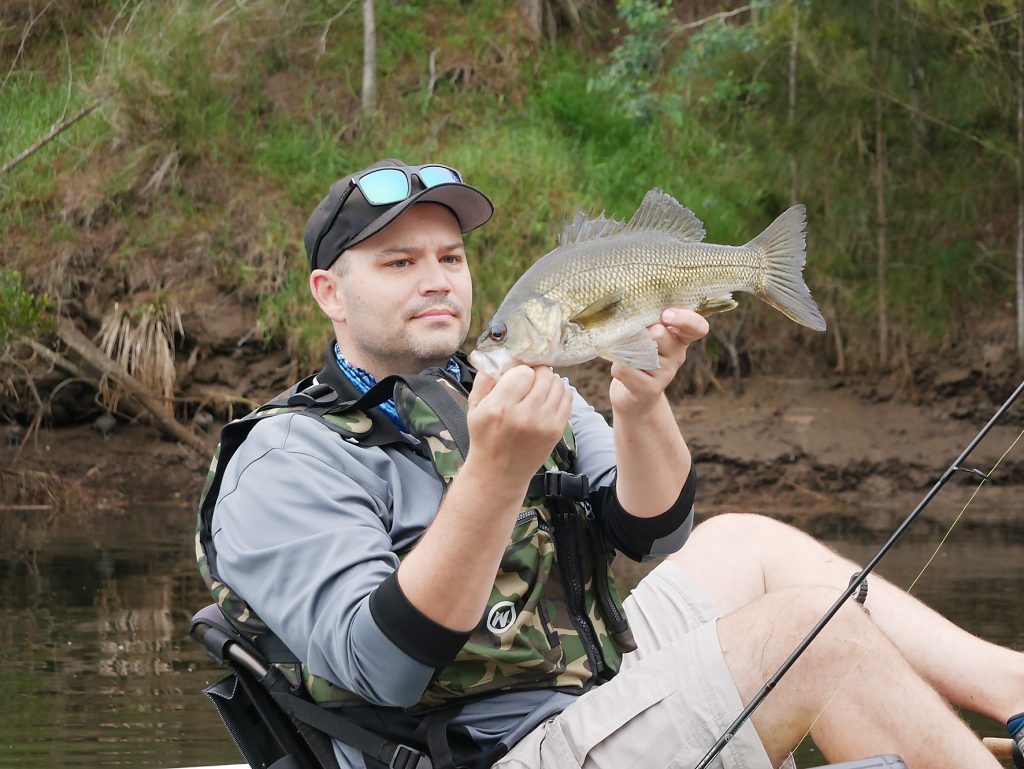 This solid bass was tricked into taking a DStyle in fast water. 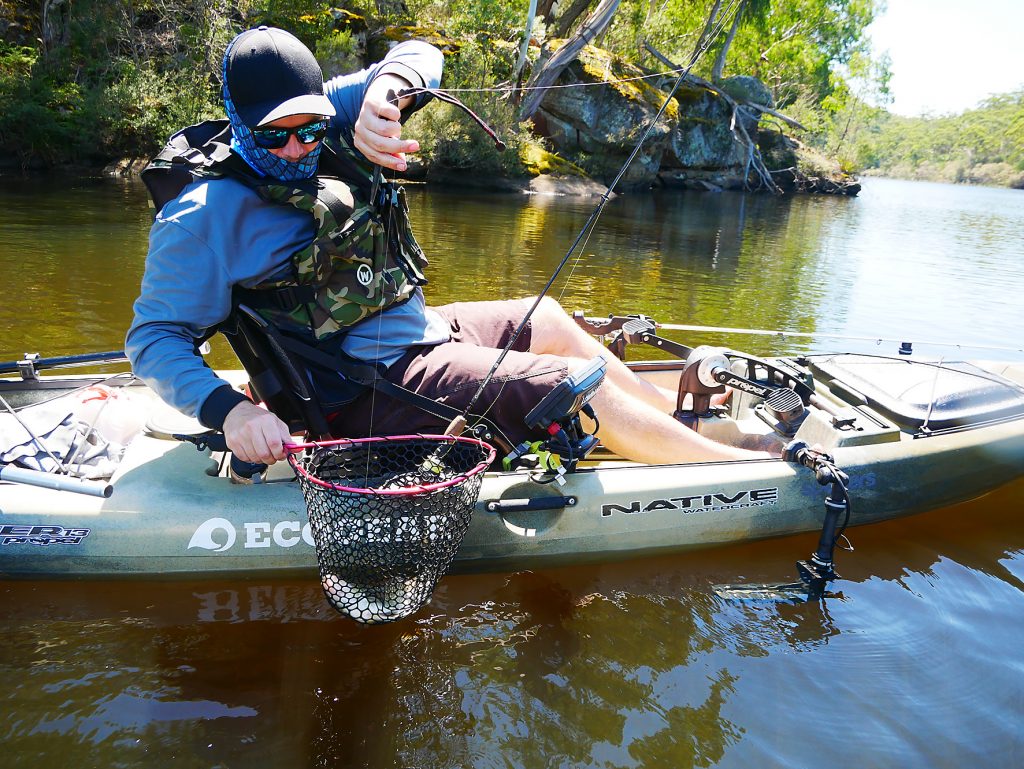 These techniques work especially well when you’re fishing from a kayak or boat. 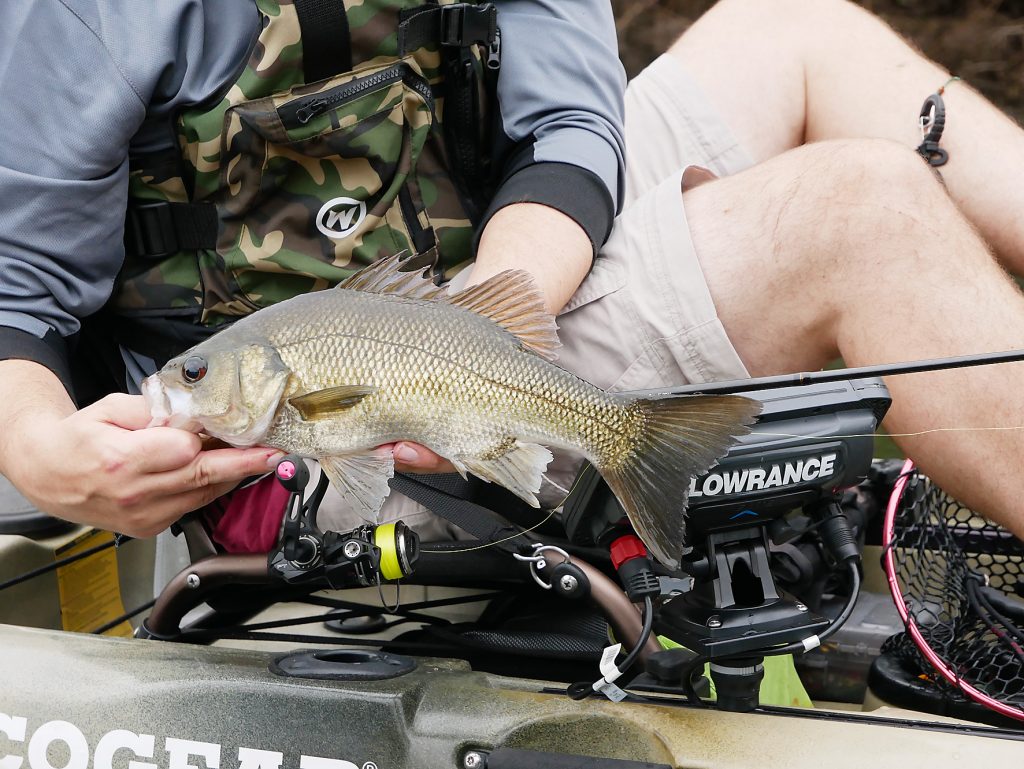 Use your sounder to find shut-down fish. 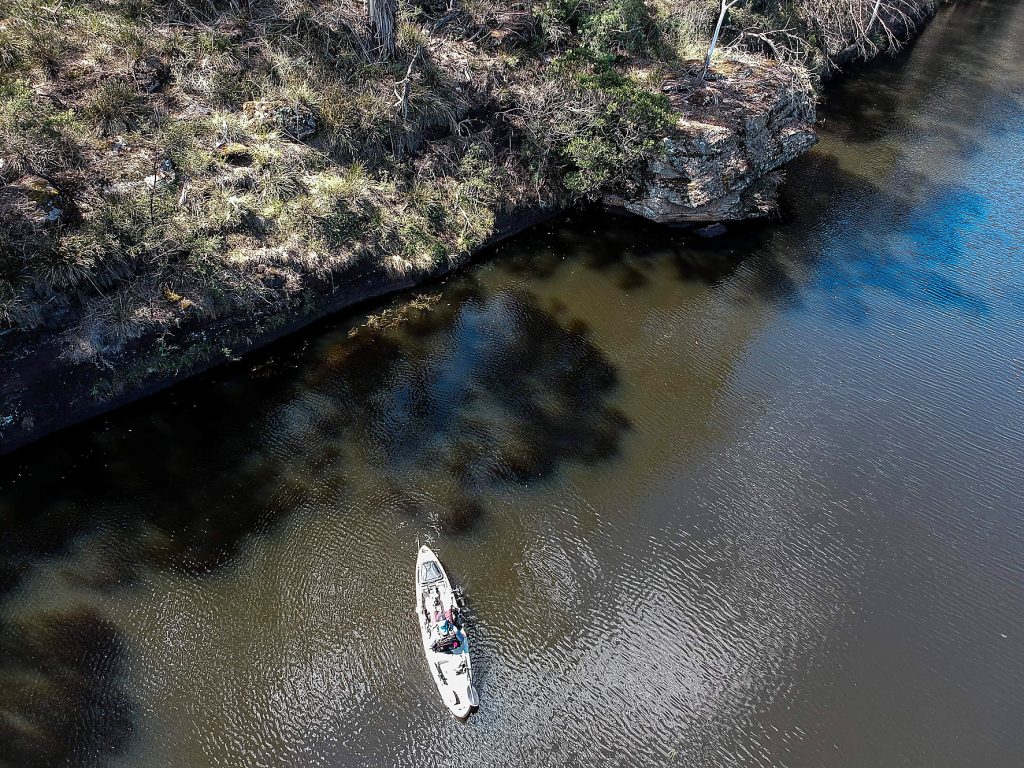 The staccato retrieve works well when casting at shade lines. 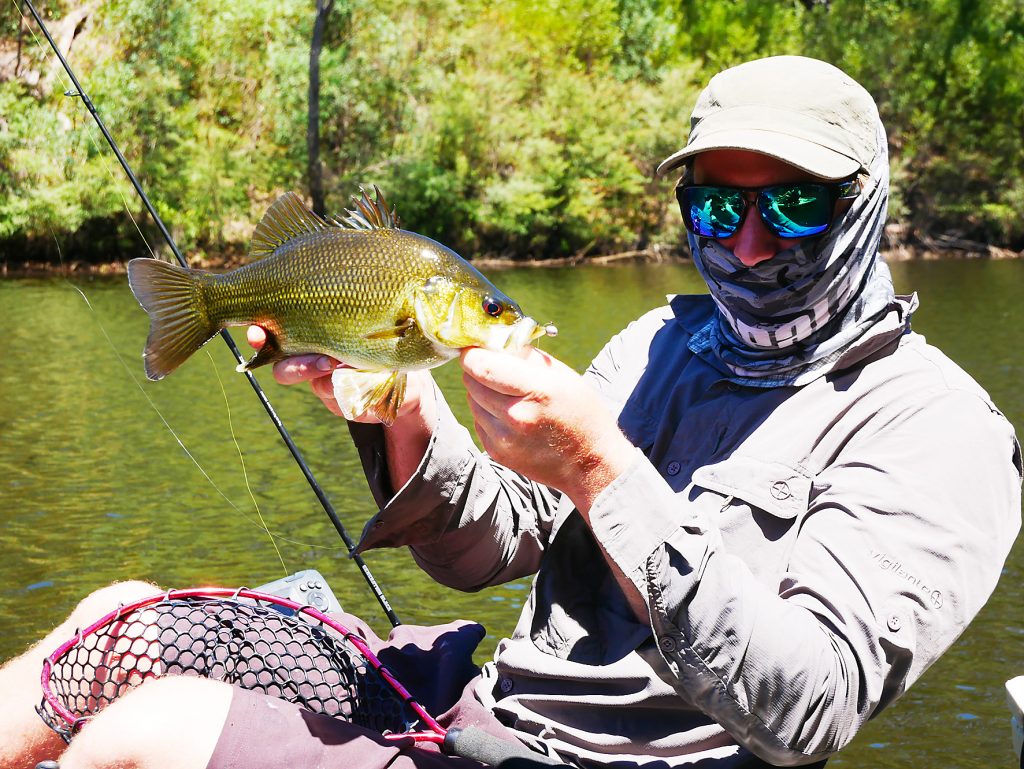 Michael Wilson caught this solid fish using a jostle retrieve and a plastic over a deep snag. 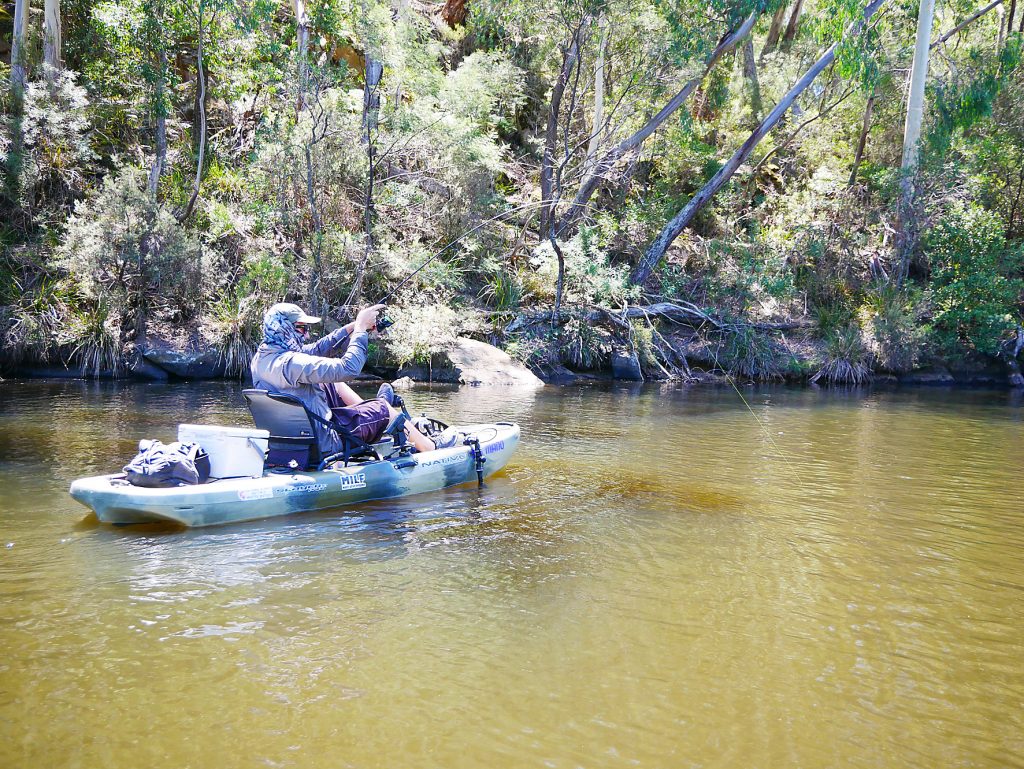 Hooked up to a solid bass.

If you’re fishing from a kayak or boat, keep an eye on the sounder. Often I’ll sound shut down bass hanging on the bottom, especially in impoundments during early spring. Where once I was pretty disappointed to see these arches sulking down deep I now get excited, because these more subtle retrieves work really well on schooled up, shut down fish.

I run a Lowrance Elite Series 7ti and it’s a great unit, but any sounder which gives you an accurate read of the bottom will suffice.

These tactics work well from the bank but also when fishing from a boat or kayak. I will say though that it is far easier to out manoeuvre a big bass from a boat/yak and the ‘jostle’ retrieve is particularly effective when fishing plastics vertically over a snag which is hard to do from the bank. I’ve noticed that bass do wise up after a while even if I’m using the most subtle retrieve so if I do hook and land a couple of fish from the bank or from the kayak, I tend to move to the next likely spot before returning later in the session.

I think there are a lot of fly techniques out there which would be applicable in a spin or bait cast context and vice versa. In fact, I believe I’ve only just touched the surface here. That said, these three retrieves have changed the way I approach bass fishing for the better and have got me looking for more links between fly and spin so I can catch more and more of my favourite freshwater sports fish.

by Jamie Robley • Summer is a fantastic time of year for casting lures in search of the humble bream. Right now, our coastal waterways are warm and full of life such as the prey […]

by Peter Jung • East Gippsland is full of great holiday destinations that have a fishing twist. One such locale is Marlo and the Cape Conran coastal area, which is a short drive via the […]