Australia is lucky enough to have the best black marlin fishery anywhere in the world, both for quality and quantity. The legendary giant black marlin fishery off Cairns produces more granders (fish over a 1000lbs) than anywhere else in world. It is mainly experienced though through larger live-aboard style charter boats set up for heavy tackle fishing, which puts it out of reach for most anglers.

On the flipside the annual inshore run of juvenile black marlin is something that even small inshore boats can get in on the action for, and in areas like Jervis Bay blacks can even be caught from the rocks.

These fish start showing up in Townsville around winter then move down when the East Australian Current starts to run south. Progressively from November to March concentrations of small blacks will show up from Fraser Island through to the Gold Coast down to South West Rocks, Port Stephens, Sydney and Jervis Bay.

How many fish show up varies considerably each year, depending on the previous years recruitment.

In 1997 the NSW interclub tournament tagged 852 black marlin in just four days and while this was an exceptional year there have been plenty of good ones since. When they’re really hot, switched on crews can rack up double figures. Only a couple of years back Scotty Thorrington, who operates Freedom Fishing Charters, caught 20 in one day out of Port Stephens.

The fact that this kind of action is accessible to small boats makes it very special and just about the most fun you can have out of a trailer boat.

As red hot as these fish can be, everyday is completely different and they can go off the boil very quickly, so waiting until there’s a hot bite and everyone else is catching them won’t often pay off. There are also a lot of things you can do wrong and common mistakes that virtually write off any chances of success, so it’s important to weed these out of your game before you start.

The two fundamental things to look for are good water and food sources. This is where sea surface sites and apps really pay off. Some like the one on BOM website are free and will give some idea, but if you want up to date accurate detailed maps then you need to open your wallet and invest in something like Rip Charts or Fish Track. These will allow you to really hone in on those high potential areas or to stay at home because the waters turned over and gone cold. The ideal water is a nice blue colour and 21-25°C.

Once you find a patch of good water the next thing to look for is the food source. 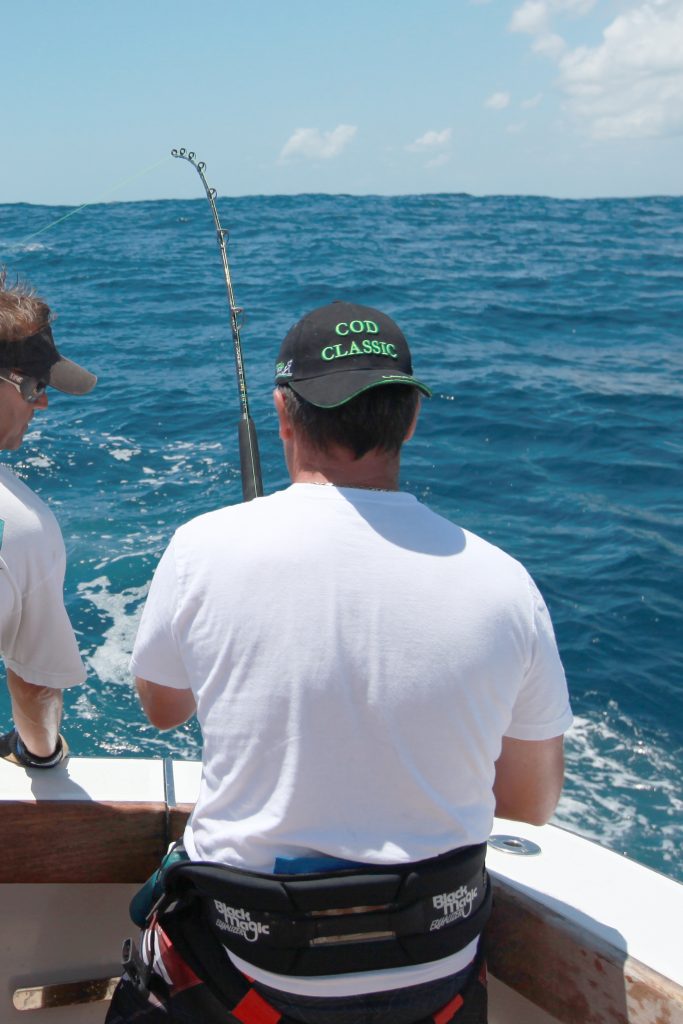 Marlin can be brutal fights, but the rewards are worth it. 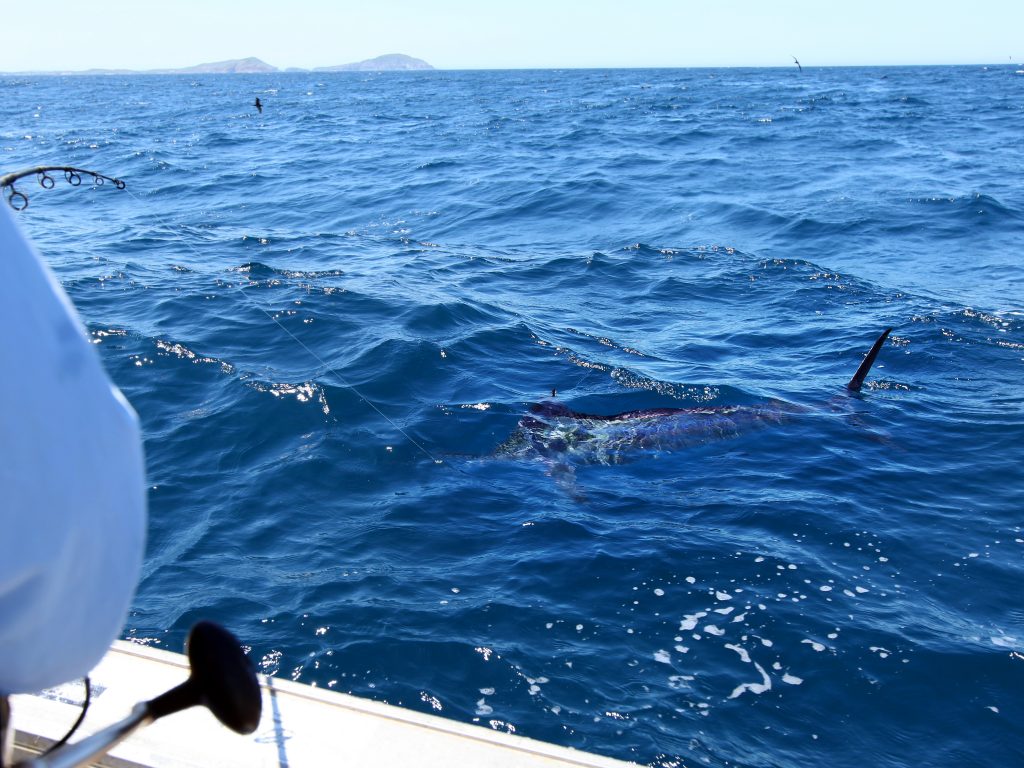 A beautiful black boat in the closing stages of a fight. 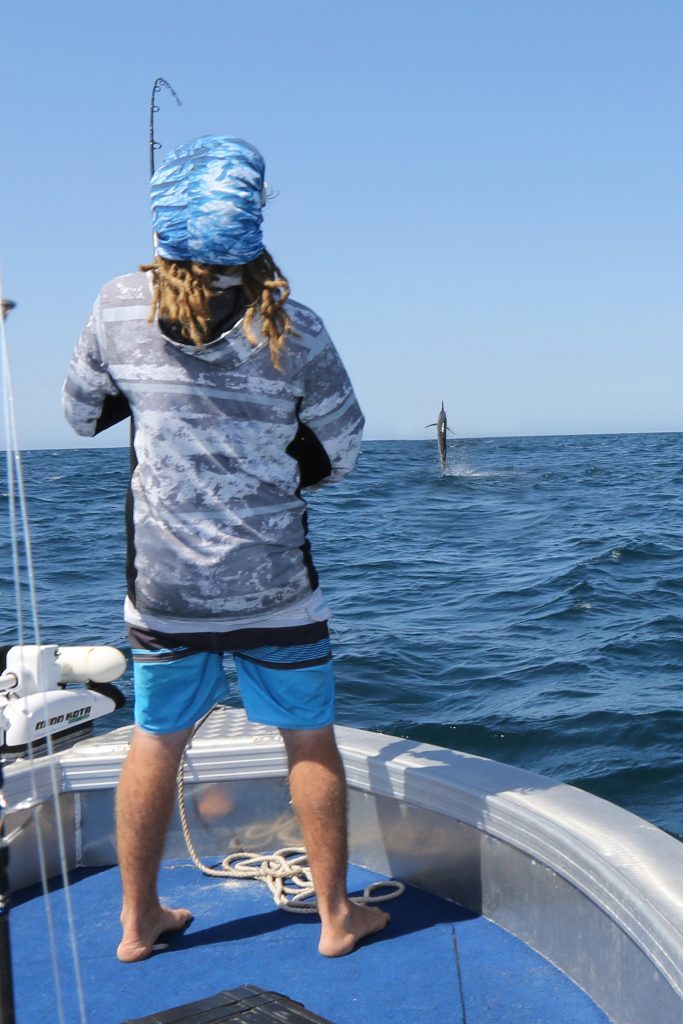 The author hooked up and fighting a marlin only 1km from shore. 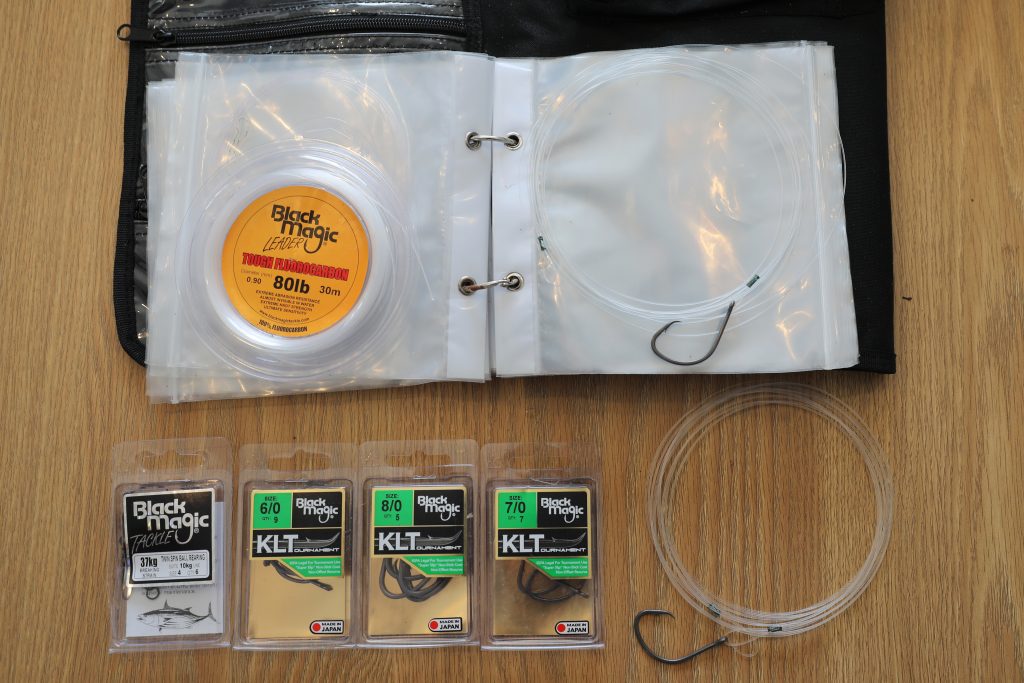 Pre-rigging your leaders will save you time spent out of the water resulting in more fish caught.

For inshore black marlin the most common of these are schools of slimy mackerel, yellowtail and pilchards. Check your Navionics charts for any reefs or pinnacles in 30-80m of water, as these create upwelling and there is plenty of food for slimy and yellowtail schools to hold on and in-turn attract predators such as black marlin. They will also be feeding on pilchard schools, holding on to the edges of temperature breaks and current lines.

Good quality electronics play a big role in modern day marlin fishing. Not just for finding bait, but also marking marlin. With the right sounder it’s possible to mark multiple marlin feeding on a bait school, which you can then spend the time on to try and get a bite out of.

While trolling skirted lures for marlin is a proven technique, live baiting for inshore fish is far more productive. The biggest advantage is the conversion rate of strikes as small blacks, especially the toothpick-sized models, can be woeful on trolled lures. An effective technique is slow trolling a bridled live slimy mackerel through bait schools with one up high and the other with a sinker attached via elastic band to the leader so as to get down deeper. This way you can really focus on balled up bait or marked fish and work all depths of the water column to give yourself the maximum chance of a bite. Done right and using circle hooks and the right angle the success rate is very high for hooking and landing that fish. Reels need to be fished in freespool to a release clip and when the line pops out and drag screams it is just a matter of pointing the rod at the fish and slowly engaging the drag and lifting up on the rod.

The other benefit of circles is they are almost always hooked in the corner of the jaw, virtually eliminating gut hooked fish and ensuring a far better survival rate for released fish.

While there is a big range of circle hooks available out there, Black Magic Tackle has released their new KLT circles, which are highly productive. They are an inline hook and this makes them tournament legal with a Teflon coating that greatly improves hook penetration. The Teflon coating also aids in rust and corrosion resistance. This a big benefit as one of the biggest problems with some other high end popular circle hooks is the point of the hooks corrodes away after one use.

They are available in size 6/0, 7/0 and 8,0 and while all will be adequate I think the 7/0 will hit the sweet spot for all sized inshore blacks, from 10kg to those 100kg inshore granders that sometimes pop up.

In marlin fishing it’s nice to have everything rigged up and prepared, especially your leaders. I always use fluorocarbon for leaders and I would recommend Black Magic Tough FC. For inshore fish 80lb is perfect and should hang in there if a 100kg model does come along, but if fishing is tough try dropping down to a 60lb leader. It could help you get that bite.

I run about 12ft of leader with hook crimped on one end and a loop crimped on the other that clips to a small ball bearing snap swivel tied to a short double on the end of my mainline.

Light mono is by far the best for marlin, as braided line has no stretch for a brutal fight, often resulting in pulled hooks and busted leaders. For inshore fish 10kg is ideal and Black Magic IGFA line is what I use and it has never let me down. The hi-viz yellow is the way to go as it makes it much easier for the skipper to see where the line is in relation to the fish when fighting.

Smaller leaver drag overheads in a 16-20 size are most popular for this type of fishing, however, spin set ups with bait-runner style reels such as Shimano Thunnus 8000 are gaining popularity. The one big advantage the overhead still has over the spin gear is if you get that 80kg stubborn fish on, you can clip yourself into a Black Magic Equalizer gimbal and harness. These are high performing and for long hard fights they can be a lifesaver, even on inshore fish. They can be set up and fitted prior to using and then you slip off the gimbal but keep the belt on and when the time comes, it’s a quick simple procedure to slip the gimbal back onto the belt.

by Tony Kemna • Although the Gippsland Lakes system is huge, with fishing options around every corner, the true anglers’ paradise can be found through the Lakes Entrance Bar. Bread and butter species such as […]

by Paul Lennon • For many anglers, catching a marlin is the pinnacle of fishing and often thought of as an unrealistic target species that’s best left for hardcore anglers with all the gear and […]