Javelinfish or barred grunter would have to be one of the most underrated fish swimming in our waters. For many a year the grunter has swum under the recreational fishing radar, with many anglers writing them off as a ‘bait fishing only’ species. The reality however is a different story as grunter are very much a viable target species on artificial baits, especially soft plastics.

Over the cooler months when tropical estuarine waters become clear and the barra and jacks become a little less cooperative, hunting a grunter can become an exciting prospect. Not only do they pose a significant challenge to lure fishers, they fight harder than a barra for their size, and taste even better on the plate.

Like many anglers, my first experience chasing grunter was on bait. Every year I would traverse the track to the western side of Cape York with my Dad and chase these fish in guttered shell grit covered mouths of creeks on squid, catching them one after the other. Unlike barra and jacks, these fish had no bag limits for many years but thankfully they had been disregarded as a commercial-take species due to their lack of fillet return so numbers remained consistently high.

Since these days, the limit on barred grunter has been set at 10 fish per person however, they are still targeted heavily by bait fishing anglers right up and down the coast, with spots like Karumba and Lucinda being true hot spots. 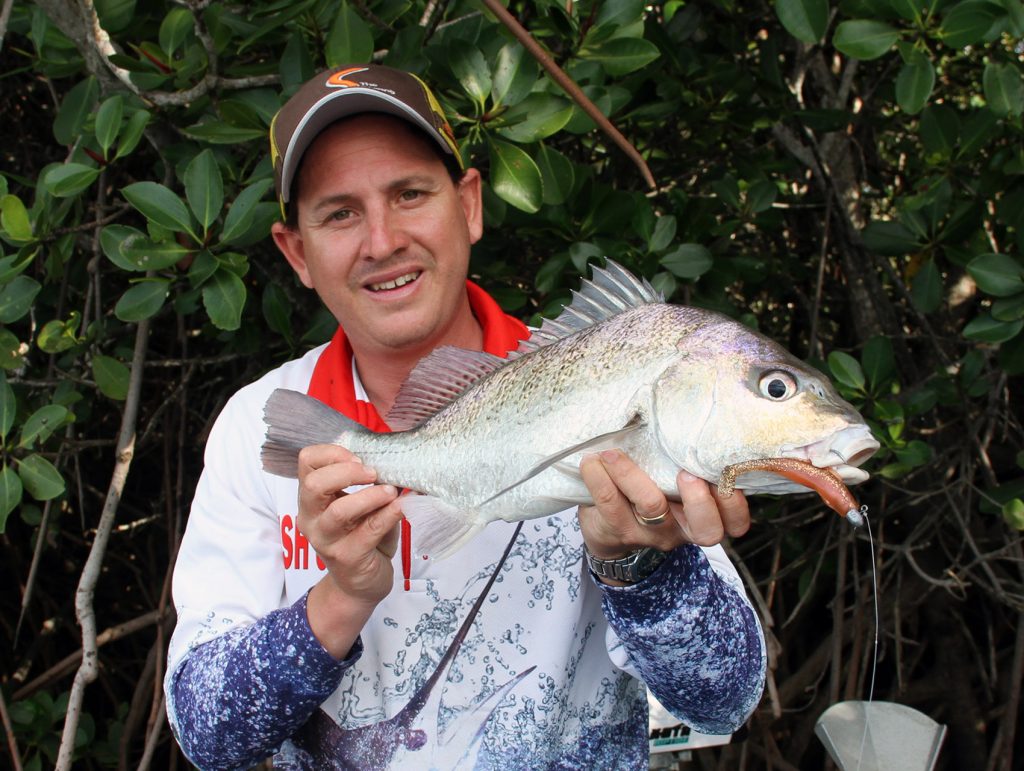 Grunter can be snared from the snags just like a barra or jack. 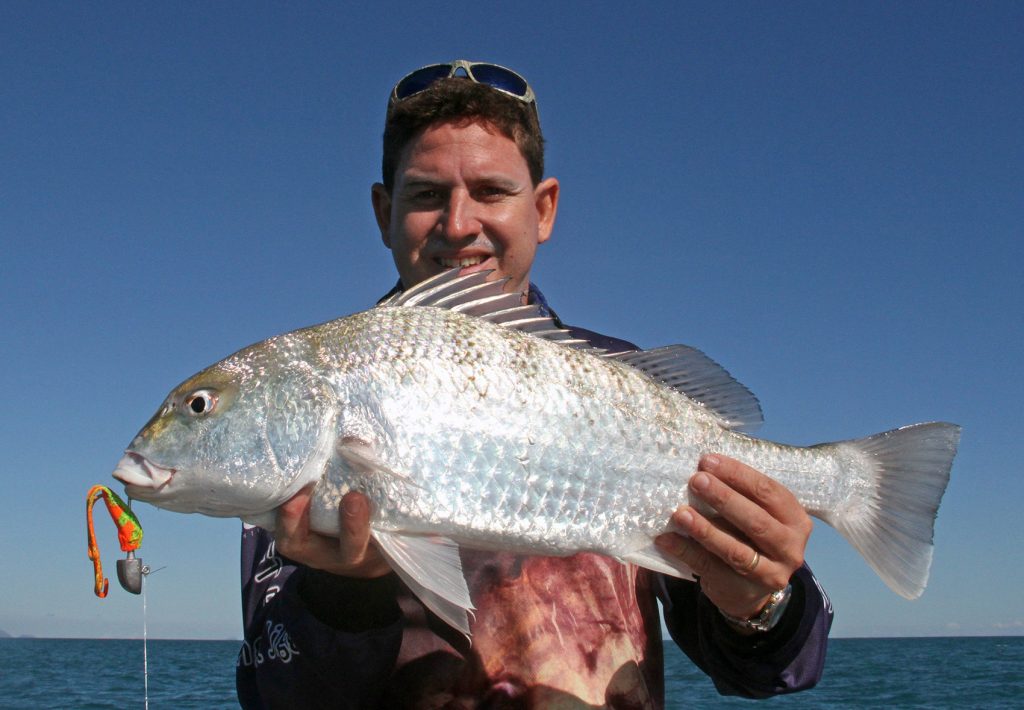 When they get this big in offshore waters they can pull like a freight train. 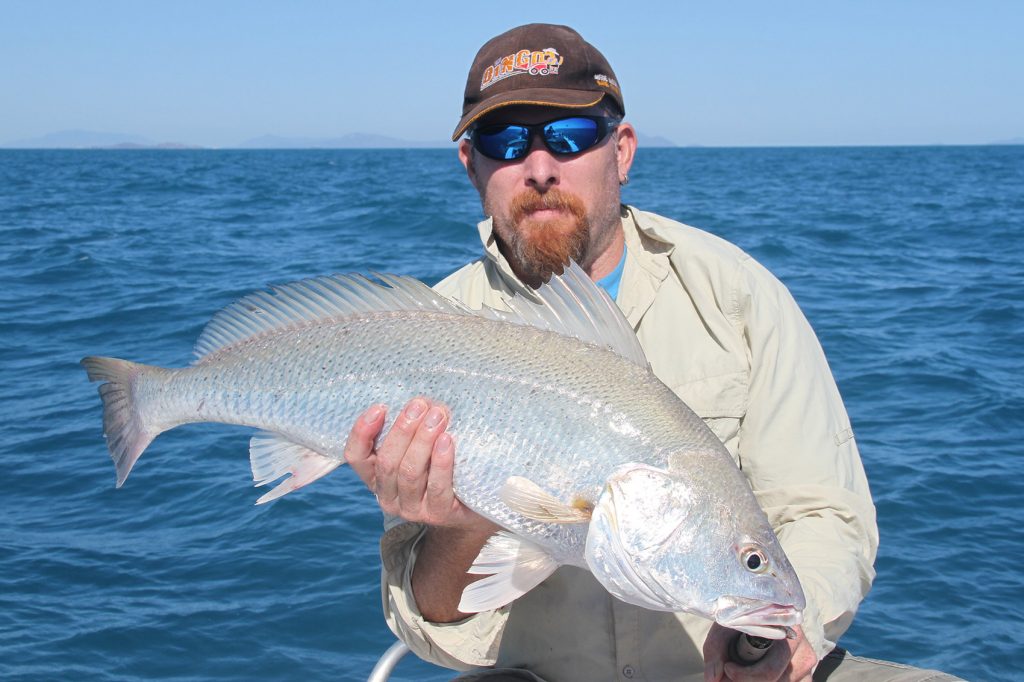 Catching a black jew is a sign that you have found a viable offshore grunter spot. 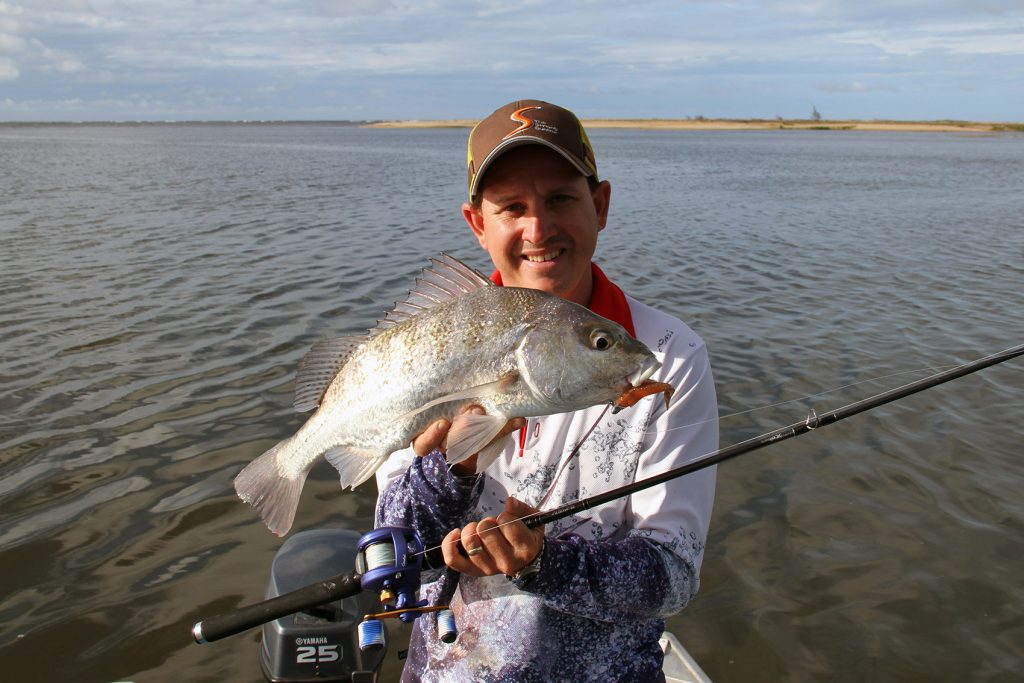 This grunter was snared off the flats in the background using a very slowly rolled soft plastic. 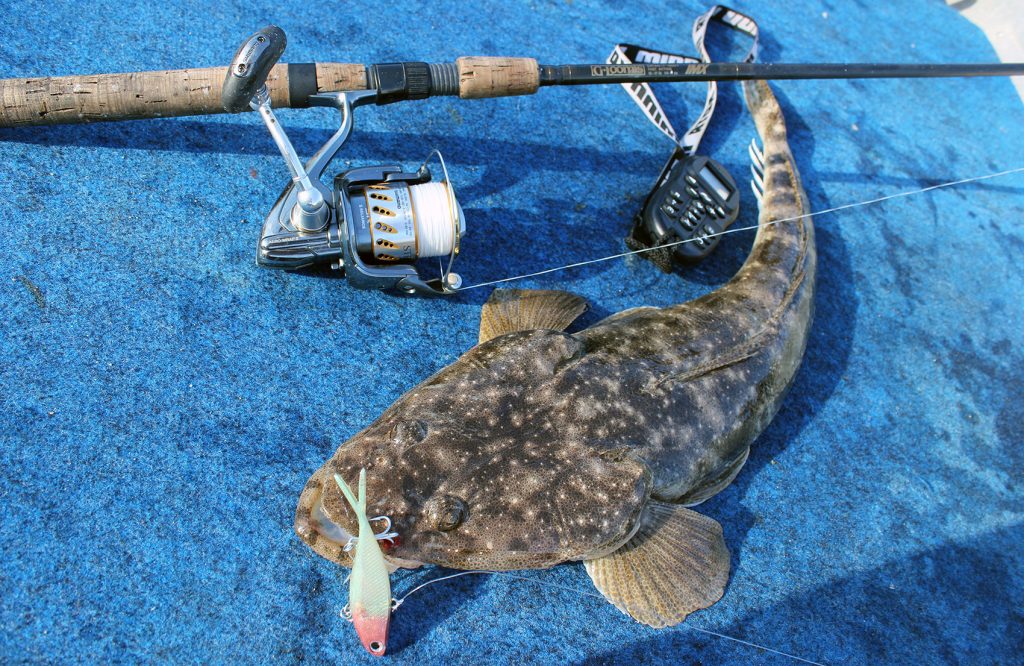 Big flathead are often a by-catch when chasing grunter. 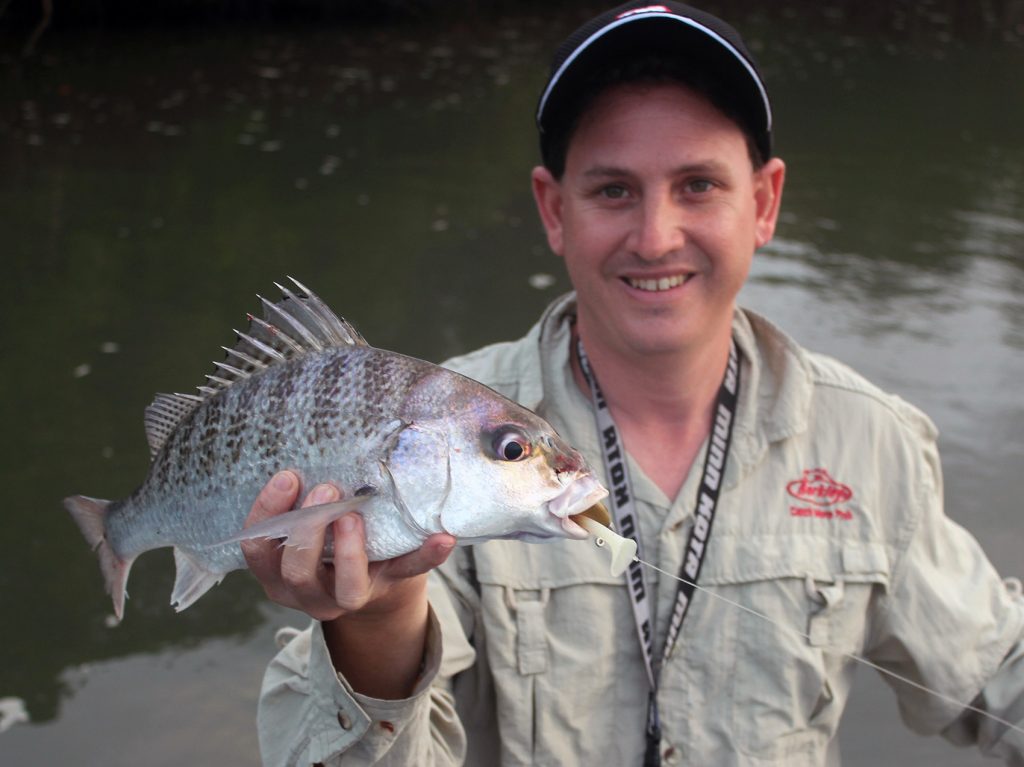 Take note of the position of the eyes and design of the mouth of the grunter. This fish is well and truly a bottom feeder. 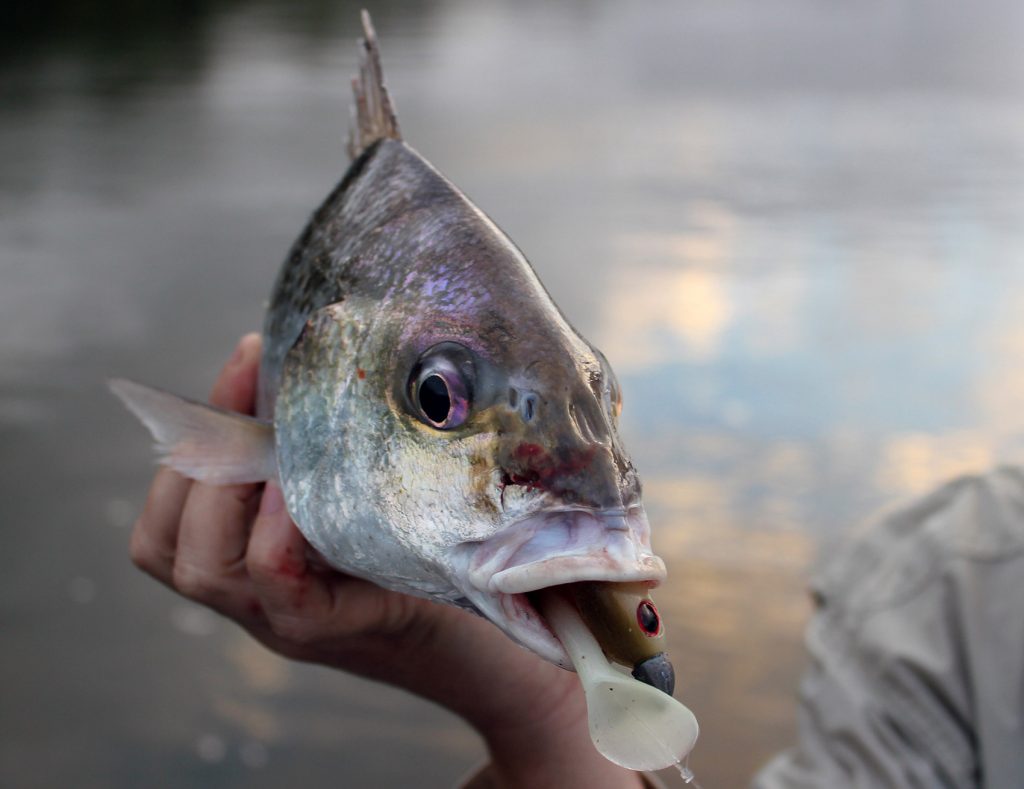 This creek grunter was taken on a 5" paddle tail soft plastic off the flats. 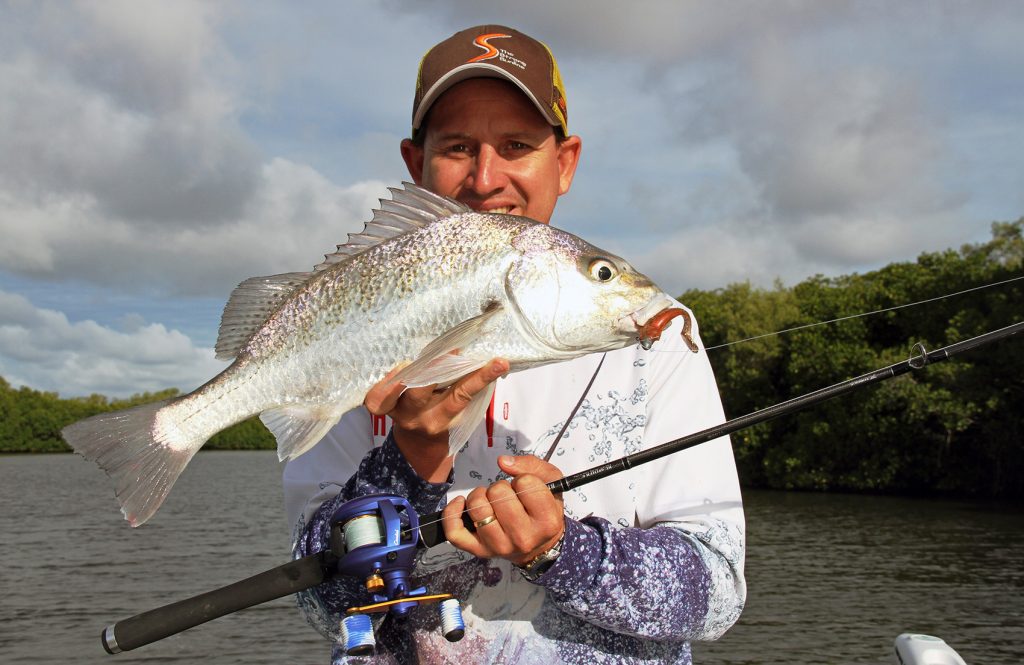 This soft plastic snared grunter was taken from the mouth of a sandy shell grit covered drain on an outgoing tide.

From these bait fishing experiences though, there has been much to learn about this humble fish and it wasn’t until I began stalking the shell grit flats and mud banks inside and outside the mouths of creeks with soft plastics did I realise that they were far from a bait-only species.

When first trying to locate where is best to fish for grunter, start around the inside and outside mouths of creeks, especially where there is plenty of sand and shell grit and deep channels gutters or holes. Barred grunter are schooling fish and I have seen them in schools of over a 100 fish. These schools will move in a tight pack, which is great news for anglers as if you find a school, you can really get into a red hot session.

Fish of similar size will school together so finding the larger fish is the key, however schools of smaller fish around the 30cm mark are much more common. To find these larger schooling fish you need to find the deeper holes or shell grit laden channels inside and outside the mouths of creeks, especially on a running tide. I prefer to fish the first run-in around these spots as the low water tends to concentrate them more into these holes or gutters. Like schooling barra or salmon, schools of grunter will show up really well on a sounder so sounding them up is certainly a viable option. In Northern Cape systems I have had much more success chasing these fish several hundred metres outside the mouths of creeks where the cleaner water and shell grit structure tends to be more prevalent.

Barred grunter are also very much a flats fish and you only have to take a look at the way their mouths are designed to see they have a downward facing set of lips that are designed to scour the bottom. Unlike fish that hoover up their food, such as golden trevally, barred grunter move along the bottom mooching the floor for worms, crustaceans, prawns and small fish, turning over the grit as they go. This is why these fish love to hang around and feed on shell grit style bottom compared to straight sand. This style of bottom structure tends to hold more food – find the shell grit and you will find the grunter.

When chasing these fish on the flats, the top of the tide either incoming or outgoing is best as this is when the fish are either moving up on the flats to feed or moving off them as the water recedes. I prefer the incoming as this is when they seem to be the hungriest. Over the flats you tend to find the larger single fish compared to the big schools of medium sized fish and this is where many of the trophy fish are scored.

Drains are also a great spot to target grunter, especially if they are more of the sandy variety as opposed to mud. A well flooding sandy drain is a very likely spot for a school of grunter to be hanging about, particularly if it is flowing onto a shell grit bottom. Barred grunter can also be snared snag bashing but these are more accidental captures and are far from targeting.

Whether you are chasing them over the flats or around the mouths of creeks you must be fishing soft plastics on the bottom if you are going to have success. As mentioned before, these fish have a very downward facing mouth and eyes that are very much focused on the bottom. Running or rolling soft plastics just off the bottom is a very successful technique and this is where getting your jighead weight right is absolutely essentially.

Bouncing or hopping soft plastics along the bottom is also a sound technique, however I have found these fish tend to be easily spooked if you create too much bottom commotion. They really do love a subtle approach and if you can get the presentation right they will move out of their way to hunt and devour a lure just as savagely as a jack.

When it comes to lure options for working the flats it’s hard to go past 3-4” style paddle-tails and it’s hard to go past soft plastics like the Z-Man Diesel minnow when chasing these fish. I have snared them on a number of other paddle-tail and grub style lures, which I attribute more to the bottom hugging slow roll action than the actual plastic.

When fishing the deeper holes, smaller vibe style lures are also very good to use especially the ones that can be swum as well as hopped along the bottom.

Grunter don’t mess about on the take and hammer a lure just as hard as a jack and can really pull some string. Not only do they hit hard they are dogged fighters and don’t give up until they are at the boat. They are a true sportfish and are a real challenge on light tackle. Like barra, barred grunter have some pretty serious gill rakers and extremely sharp gills. It is really important to take extreme care when handling these fish as they can tear you open or easily punch a hole in you from their many anal and dorsal spines. While it is important to go stealthy and light as possible on the leader to get the bite, you need to use a leader, which will be up to the task and I prefer to use Sunline FC Rock Bream Special fluorocarbon in 8lb as it has a really low memory, insane transparency in the water but most importantly has outstanding abrasion-resistance. Not only can it handle the fish’s defences but also the sandy abrasive grit bottom that grunter love to bury you in the bottom.

Like many estuarine species, barred grunter will make their way offshore when they get to a certain size, hence why some of the larger fish are snared outsides the mouths of creeks. In fact I have caught grunter in rubble patches 40km offshore from Bowen amongst the likes of saddle tail snapper in over a 100ft of water. These fish are usually over the 60cm mark and are thick across the shoulders and fight like hell. They are suckers for soft plastics, particularly those worked very subtlety on the bottom. If you are chasing them offshore then once again look for rubble shell grit style patches in deep water. One excellent indicator of a good offshore grunter ground is the presence of black jew as these fish tend to hang together.

Grunters are a terrific sport and table fish and are a top fish to target whether it is across the flats, in the holes or gutters out the mouths of creeks or out in the deep blue. So if you are after a challenge, go hunt a grunt, you certainly won’t be disappointed.