Summer time is kingfish time here in South West Victoria and more and more anglers seem keen to take their chance to tackle this tough fighting and spectacular angling adversary.

The first step in the process is having access to a boat. The odd, usually smaller, kingfish is taken land-based but for serious success you need a boat. It’s not simply a matter of having a boat though, as choice of boat is also an issue. Some kingfish locations require a large seaworthy boat to be able to make the journey across the treacherous southern ocean to the required location (and of course to be able to return safely home again).

Other locations demand a small manoeuvrable boat that can dart amongst the reefs and washes where the kings like to hang out. The ability to be able to beach launch such a boat is also often necessary.

The next step is to waiting for the right conditions to make pursuing yellowtail kingfish a viable option. Like no other fish species, if conditions aren’t good there is a minimal chance of being successful.

Peak season for targeting kingfish in Victoria is from late December through to late March. Ideal conditions are warm to hot days with flat glassy seas and minimal swell and wind. As many of you who are aware, a Victorian summer these days can be rather infrequent and sometimes difficult to predict. You can go days, even weeks without these conditions occurring. Coinciding your available fishing time with good conditions can be a very difficult proposition for many.

Another problem is that the sort of weather conducive for king fishing is also great for other forms of angling, snorkelling and diving, barbeques with mates and days at the beach with the family! Once you’ve missed out on a few of these opportunities because of unsuccessful kingfish excursions, it can be hard to maintain the faith. Making good use of all the available electronic forms of weather and sea forecasting can at least give you a head start in predicting suitable conditions.

Often one or two of the above indicators may be in place but a heavy swell, howling northerly or strong south easterly sea breeze may put paid to all your best made plans. Water temperature and clarity is also major issue in determining kingfish success. The previously mentioned weather conditions may be in place but if a current of cold water, or previous days of poor weather, has dropped the water temperature considerably, any kingfish present may develop severe lock jaw. The coldest water temp I’ve had success in is 16.6°C but 18-20°C is a more reliable starting point. Combining water temperatures of above 20°C with the right meteorological conditions will put you in with a chance. 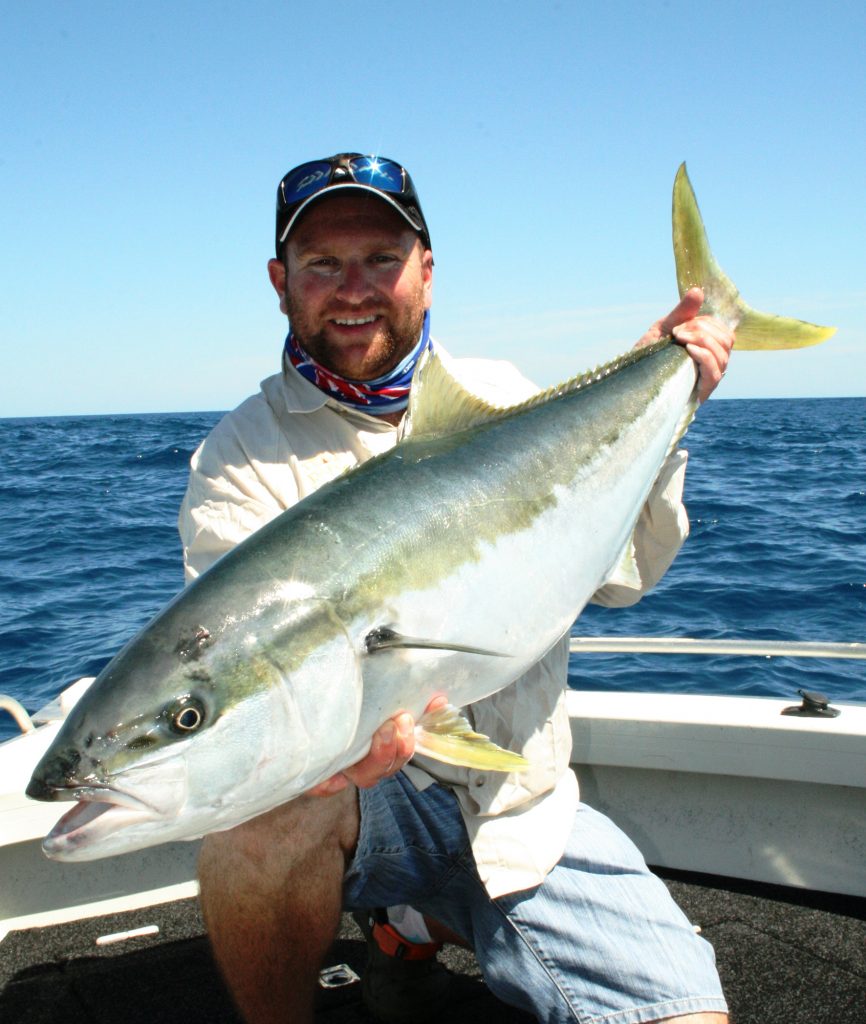 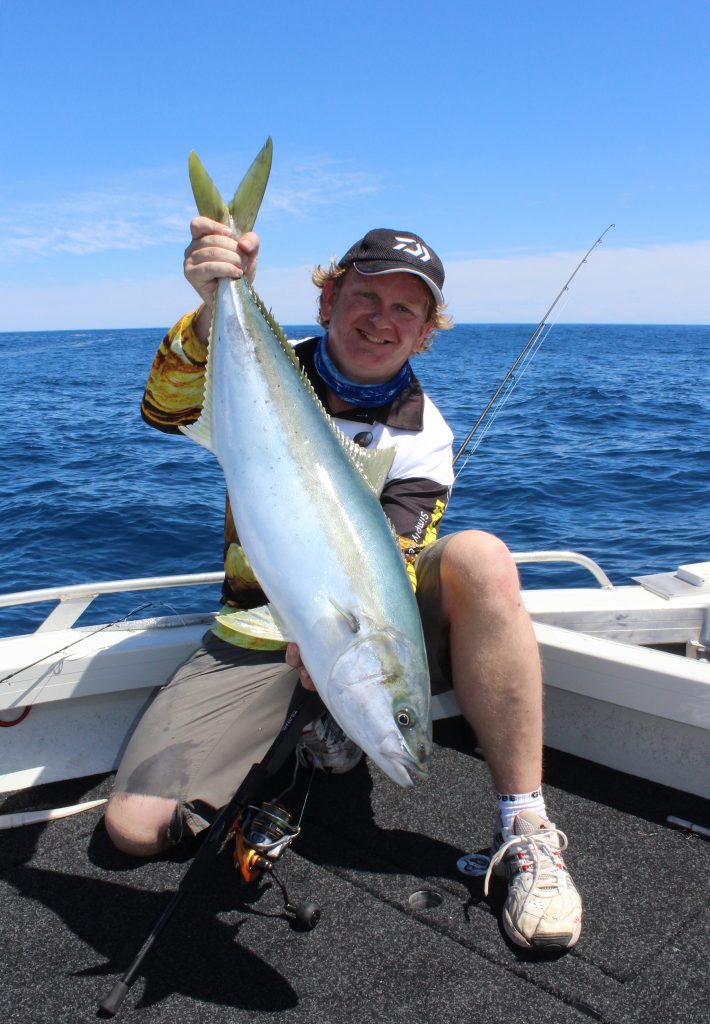 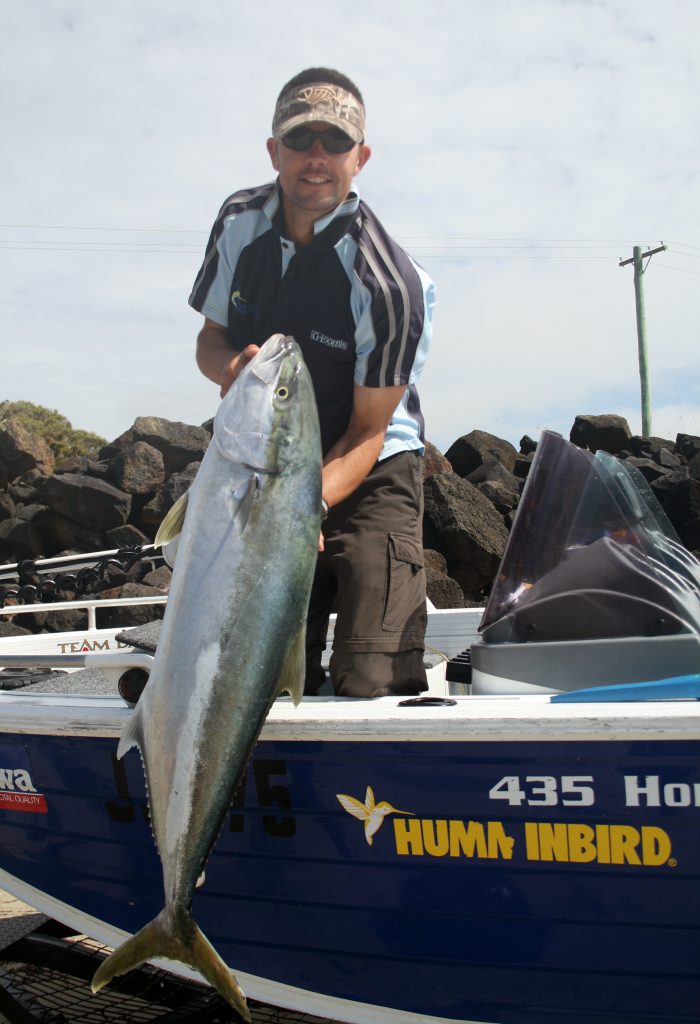 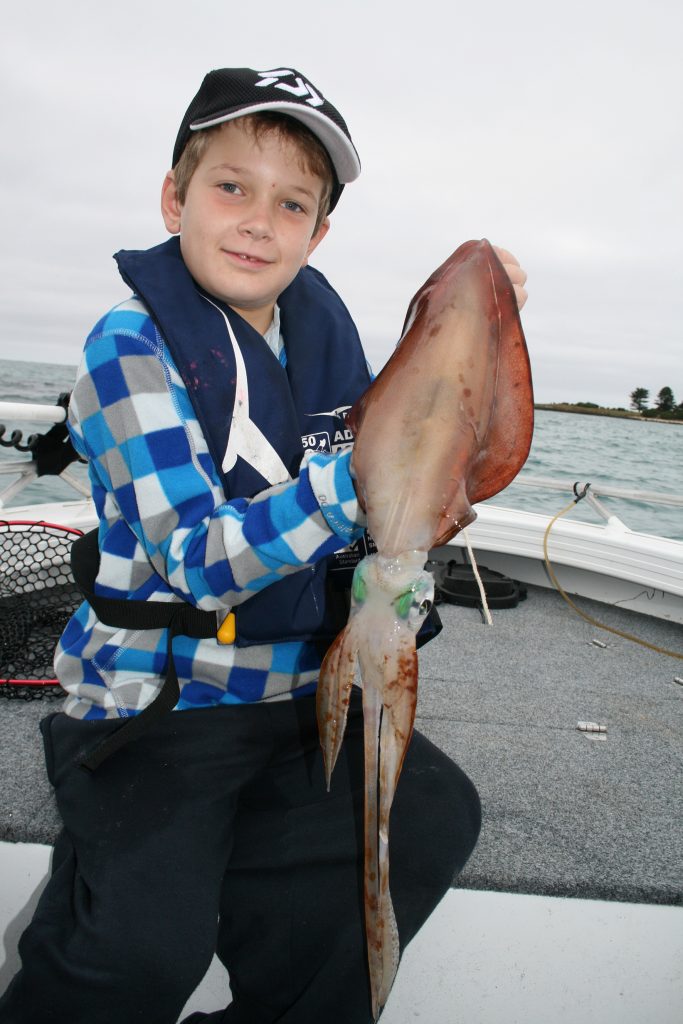 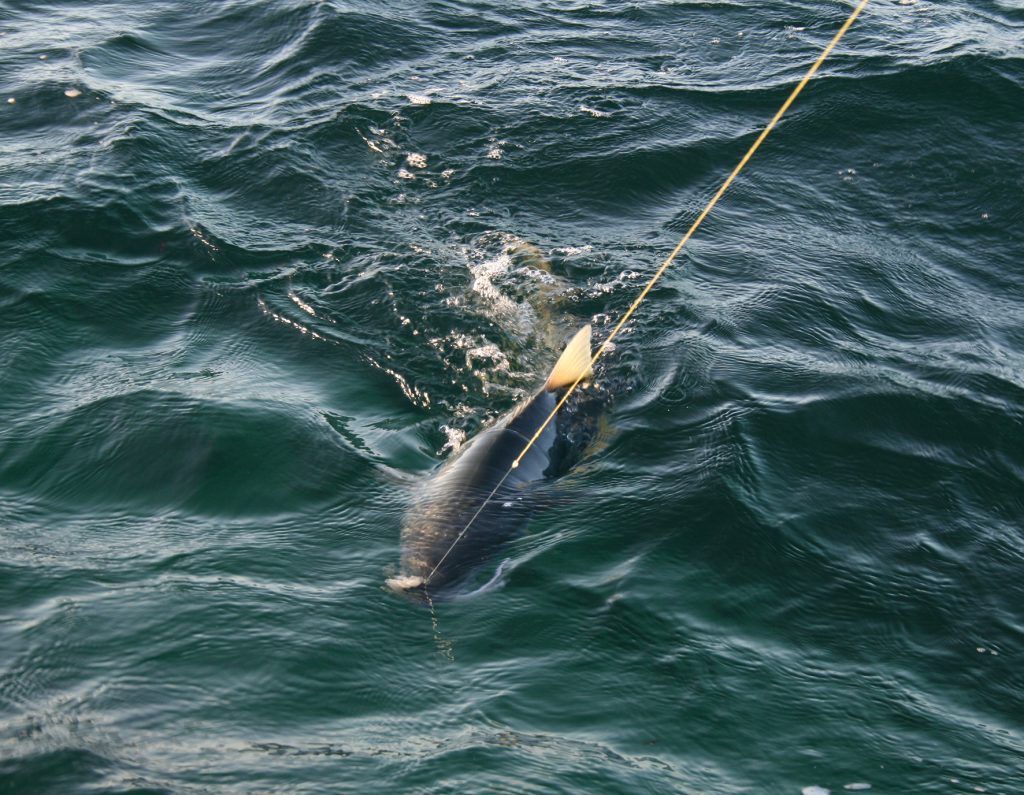 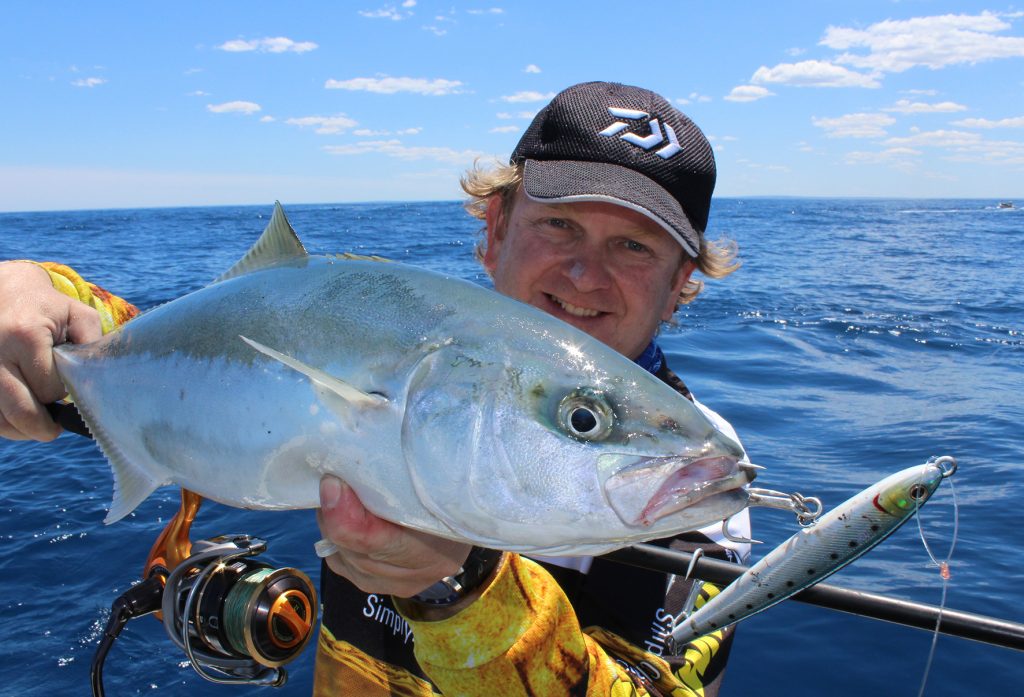 Our king fishing usually involves working our way through a series of marks on our GPS and actively trying to spot fish. Surface schooled fish are usually either feeding or will react if a lure is put into them. We often laugh at anglers glued to their sounder jigging away whilst oblivious to the surface school cruising past them.

Searching for kings can sometimes be a long and frustrating affair but by knowing you are in a productive area, or heading towards a productive area, can keep sprits and confidence high, rather than just driving around aimlessly. These marks have been accumulated over many seasons and it is amazing how the fish can show up in similar spots. If fish can’t be seen, trolling a spread of lures that make some sort of surface disturbance can help bring a school to the surface.

In shallow areas the electric motor is perhaps the key to consistently being in with a chance of catching good kings. The stealth ability of cruising around under electric power helps to spot schools on the surface and sneak up on them. In shallow water these schools quickly disperse should any petrol powered outboard come near, but sneaking up on the electric and then tossing a lure in usually results in mayhem.

Once hooked up the electric motor also is also important so you can quickly give chase and keep close to the fish, eliminating the distance and angles that would see you cut off on the reef if you were unable to give chase. After the conclusion of the battle a quick check of GPS track can often find you have travelled a considerable distance from the hook up area, as you have done your best to keep the fish close to the boat.

Big kings don’t tend to follow each other like rats, but if you use the track or mark to return to the hook up area, they may still be there or show themselves there later on. That is if someone in a big boat hasn’t driven straight over the top of them and put them down.

Sometimes the fish go down from being visible on the surface, but stay in the same area. By using the spot lock feature on the I-pilot you can stay on the fish you have sounded or the spot you last saw them on the surface. You can then drift live baits down, watch to see if they come back up or keep throwing lures to try and draw them back up.

If you are in deeper water this might be the time to drop a jig if you can see the fish on the sounder below the boat. Kings hooked on jigs seem too go even harder, if that is possible for kingfish, once hooked. It seems like the metal jig whacking them in the side of the head angers them somewhat.

So you’ve got the weather right, found some fish, now what do you do? If the first two parts of the equation weren’t hard enough, kings, particularly big ones, can be quite temperamental.

Kingies do love a live bait. A live squid or wriggling salmon is usually irresistible if you manage to put it in front of a king… usually! There are times when the fish will not touch a livey, but will eat a lure. Other times the fish might swim past a live bait and eat a fresh squid strip or even worse, swim past all of the above on the heavy gear and eat a fresh piece of squid on a whiting rod!

It is this unpredictability, which while at times driving you mad, only adds to the mystique of pursuing kingfish. Like many lure caught species, kingfish often succumb to a reaction bite. Whilst they might not be in a feeding mood the commotion made by a surface lure can goad them into action, even if they have refused a juicy live offering.

At other times they will follow a lure but not take it. The quick thinking or prepared angler who can quickly present a live bait into the mix before the fish departs the scene, can often be rewarded. I suppose the main point here is to be open to options rather than blinkered into one technique in case the fish are being fussy on that particular day.

Large soft plastics and stickbaits are perhaps the best lures to throw at them. Sometimes they like it cranked back at warp speed, other days the like a pause, some days they’ll only eat it on the drop. Observe the fish’s reaction to your first offering and hope they give you a second chance to do something different next time.

The South West does have a fairly consistent population of kingfish over the summer months. The best locations vary from season to season, so keep your eyes out when on the water; you never know where you will come across them.

It can be terribly difficult to get the right conditions, find the fish and get them to bite. However when it all come together, and you fish yourself hooked up to a rampaging king, you will soon see that all the effort was well and truly worth it

For large and small boats. Kingfish can even be found within the harbour area or just outside on the ‘Town Reef’ area. Most boats, however, head east across Portland Bay to the region known as the North Shore. Kingfish can be encountered virtually anywhere along this shallow reefy section of the coast from waters as shallow as 3m to the deeper water around 10m on the edge of the shallow reefy section. Alternatively, heading west brings you to Lawrance Rock, which is an area that can also hold populations of kingfish.

Turning left at the boat ramp sign off the princess highway brings you to a small beach launch ramp known as Wallys Ramp. This ramp is good for small boats. A 4WD is needed for all but the smallest boats, although it is an easier beach launch than Killarney. This ramp allows small boats to launch directly at the productive North Shore area negating the long journey from the Portland ramp.

For large and small boats. This is a small town ramp that enters into the Moyne River, no bar crossing involved. Smaller boats can head across Port Fairy Bay until you come to reefy areas that link up to the Killarney area. Larger boats can head west as there are also other reef areas worth exploring between here and Yambuck. You can use the closest ramp if you intend on fishing Lady Julia Percy Island. This is an adventure only for large seaworthy craft, any wind from the southeast quarter (extremely common over summer) can make for an arduous return journey.

Killarney, west of Warrnambool can be reached by traveling along the main highway west until you reach the pub at Killarney. Turn left and follow the road to the beach. A 4WD is preferred as a 2WD can get easily bogged in soft sand. Once outside the sheltered bay kings can be found anywhere along the reef areas to the left or right. Look for deeper water on outside edge of rocks with weed and presence of bait or salmon schools. Be very careful as reefs can break in all but the calmest seas.

This is a town ramp near the break wall and can facilitate large and small boats. Heading west past the marine park area at Thunder Point, look for reef areas in 8-12m of water as you head towards the Basin/Killarney area. Exercise extreme caution in all but the calmest seas.

When it comes to fish that pull hard, kingfish are right up there with the most brutal line-busting and tackle-destroying thing that swims. While they can grow in excess of 50kg, anything over 10kg is […]

by Jamison Godfrey • This superb table fish is readily available for mainland anglers to target quite freely. For us in Tassie we have to wait for the warmer months. Unfortunately we didn’t see a […]

Catch yourself a kingfish

by Gary Brown • Pound for pound, yellowtail kingfish are one of the hardest fighting fish in the water. At times, they can be led to the boat with so much ease that they’ll completely […]